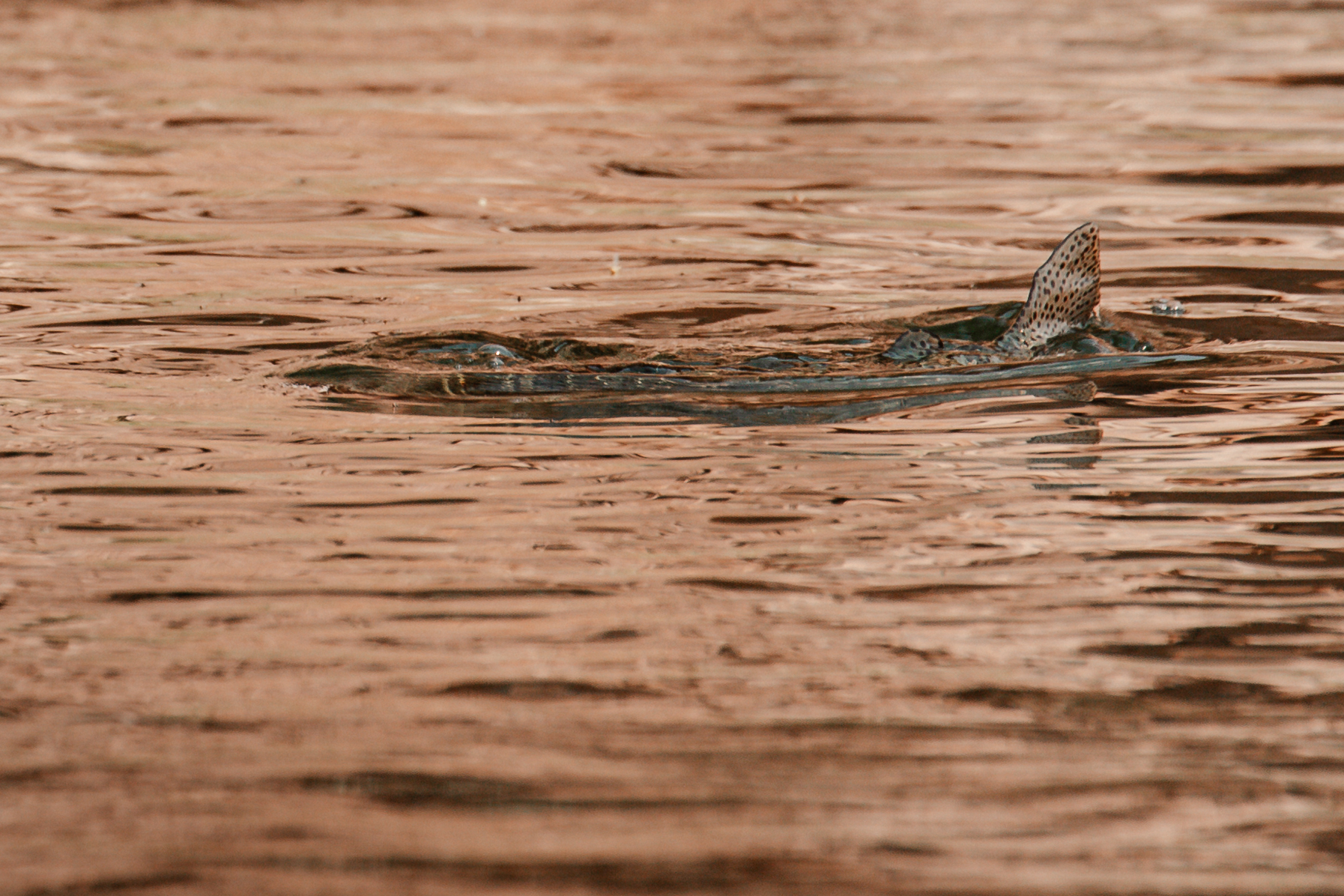 I watch the rainbow nose up into his feeding line again, annoyingly consistent. The size of his nose and dorsal fin alone tells me this is a good fish; on a river filled with sizeable trout, he stands out.

It only makes me want to connect with him more.

My flies drift over his nose again.

As soon as they’re three inches past, he rises again, as calm and collected as you please.

I sweep the double-dry rig to the side and strip it back in. That was the second drift with the Corn Fed Caddis and the Split Back PMD … time to change it up. Again. I shoot a grin to Brett, posted up on the oars watching the whole scene with a patient sort of amusement.

He knows. He’s watched this fish every guide day this season.

It’s unmistakably a Montana summer. A heat wave is lingering over the Missouri River, bringing with it wildfire smoke that locals hope will drive away some of the aspiring “expert angler” tourists. Two days ago, the hills on the far side of the river had burned in a rapidly contained tourist-started fire, leaving behind a crunchy, charred landscape and the thick taste of smoke in the air. Temperatures were pressing upward of 100F every day, the smoke so thick we couldn’t see the fire’s scorch marks as we floated past.

I change out to my favored Missouri River fly, the Buzzball. Homely, sometimes downright ugly depending on the tie (and how much whiskey has been imbibed over the course of the tie), the Buzzball looks like a mashed-up cluster of tricos, faded to a rusty color. Dry fly enthusiasts tend to roll their eyes at it; anglers outside of central Montana eye it warily. It’s basic but effective.

I drop a Hi-Vis Rusty Spinner off the back, just for grins. Two dries are better than one, in this case, so long as I can control the drift through the foam line.

He rises prettily when the fly’s a foot before him, then again when it’s a few feet behind him.

He eats a trico right next to my Buzzball. Ignores the fly completely.

Six inches of drift later, another nose sips the Buzzball. The eat is slow, like watching the water go down a toilet bowl. My fingers twitch. Wait, wait … set.

It’s not the fish I wanted, but he’s still nice. We get him to the boat and slip him off the hook. No hero shots in the heat of the day.

We go back to waiting, eyes on the foam line.

Less than three minutes later, that big nose is feeding again, right in his lane.

I huff and shake my head, knowing it’s time to move on or we’ll be here all day.