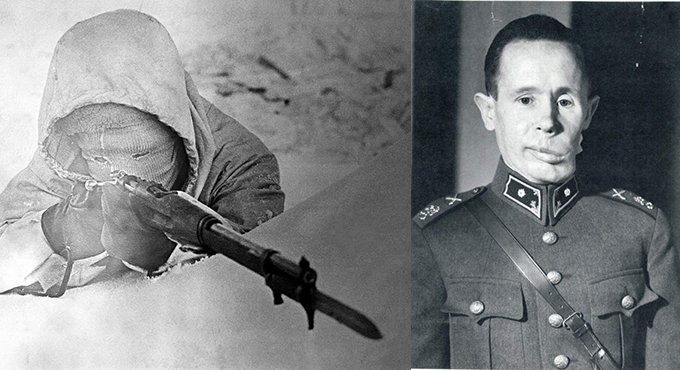 His friends and family knew him as a hunter, farmer, and avid skier.

The Russian Army cursed him as The White Death.

History lauds him for having racked the highest number of sniper kills in any major war in history.

Don’t try to pronounce it.

…was born on December 17, 1905, in the village of Kiiskinen of the Rautjärvi municipality in the Viipuri Province of southern Finland near the border with Russia. Simo worked his family farm, hunted, and skied until he joined the Finnish voluntary militia White Guard at age 17. He began his 15 months of compulsory military service at age 19 when he served in the Bicycle Battalion 2 in Raivola, Viipuri Province.

Quit trying to make sense of these Finnish names.

Simo attended sniper school in Utti in 1938 where he honed the shooting skills he had developed over his short lifetime of hunting. His instructors were amazed at Simo’s ability especially by the fact that could accurately estimate distances out to 500 feet to within 3 feet and by his nailing a target set at 150 meters 16 times in under a minute…

With a bolt action rifle.

Simo put this skill set to legendary use in 1939 when the Soviet Union invaded Finland in what was known as the Winter War.

And a Winter War it was.

During Simo’s first major encounter, the Battle of Kollaa, temperatures dropped to −40 °F and the snow in the forest stood several feet deep. Simo ignored the cold and the snow, wrapped himself in white camouflage, and did his best to shoot as many invading Ruskies as he could. Simo was so good at killing Russians that the invading army began calling him, The White Death. The Finnish government liked this nickname and used it during their wartime propaganda.

As the war went on, so did Simo with killing Russians. He got to the point where he was averaging five kills per day. By the war’s end, his diary listed more than 500 kills.

Some historians argue the number is actually higher.

Of course, taking out this many enemy combatants led to him being one of the most sought-after targets by the Russian Army. The Russians almost got Simo on March 6, 1940, when he was hit in the face by an explosive bullet. The projectile took out half his face and he was thought to be dead. His body was tossed on a pile of dead soldiers and left. A fellow soldier passed the pile sometime later only to notice a leg twitching. Simo was pulled from the pile and taken to a hospital. He regained consciousness a week later – still minus half a face – on March 13, the day that peace was declared. Simo’s recovery saw him endure 26 surgeries in 14 months.

For his service in the war, Simo was given the first and second class Medals of Liberty and the third and fourth class Crosses of Liberty. Despite these accolades and his record-breaking sniper kills during the war, Simo was reluctant to speak of his time during the Winter War. When asked in 1998 how he came to be such an excellent sniper, he simply responded, “Practice.” He did speak on the war, albeit briefly shortly before his 96th birthday when interviewed by the Helsingin Sanomat newspaper in 2001. When asked if he felt any remorse for the people he killed he replied, “I did what I was told to do, as well as I could. There would be no Finland unless everyone else had done the same.”

Simo died of natural causes at a war veterans’ nursing home in Hamina in 2002.