The Matagi Snow Hunters of Honshu 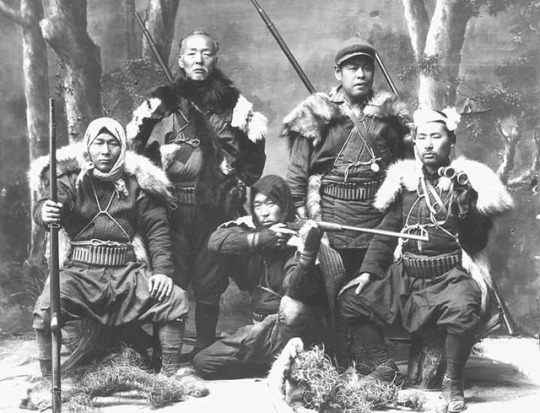 Screw pop sentiment. To hell with the politically correct. Japan’s Matagi snow hunters follow the philosophy of U.S. sage and spiritual leader Ricky Nelson. You can’t please everyone, so ya’ got to please yourself.

Hunting the moon bear pleases the Matagi. Has since at least the 16th century and undoubtedly long before that, before the Matagi culture itself emerged, a product of a hunter-gatherer lifestyle molded by the harsh mountain terrain and forests of northern Honshu where these people roamed. Mountain people doing what mountain people do. Staying alive, staying alive. Nuts. Berries. Birds. Fish. Rabbits. Serow. Bears. Collecting natural foods led to the evolution of the Matagi nagasa knife and Matagi fukuro spear, the Akita dog, group cooperation and mountain village life.

The mountain mysteries led naturally to an animistic religion. Shinto. The mountain spirit yama no kami was to be respected and appeased. It could be harsh, the soft green of summer withering to the white of winter. Show respect and spring might return. Death. Rebirth. Echoed by the furtive, enigmatic, tasty black bear with the white crescent moon on its chest. Here was a manifestation of the mountain. The bear appeared to die with the coming of winter and revive in the spring. Bear ate the same foods the Matagi ate. Honey. Raspberries. Chestnuts. Bird eggs and small mammals, serow kids. Using its paws like hands, standing and walking erect. Skinned, it looked semi-human. Fingers and toes. There was a connection, perhaps a kinship.

Then came conflict. A Buddhist religion from afar forbidding meat, forbidding hunting. Instead of abandoning its ancient homeland, it’s sustainable, natural lifestyle, the mountain people rationalized the animist and Buddhist religions, codified bear hunting in a “secret document” (Yamadachi konpon-maki), enshrining the moon bear as sacred, the hunting of it a sacred act circumscribed with ritual.

Come autumn and the first snows, the village men, ten or more, those whose wives were not with child, would gather, burn pine boughs, pray, then head up the mountains with their dogs, knives, and spears, moving into hunting cabins where they would refrain from singing, smoking, and foul language. They referred to their quarry as “the barefoot one,” “the old man with a blanket,” and “honey-eater” to camouflage their intent. When tracks revealed “the king of the forest,” the group would post standers in likely crossing saddles, surround the “beautiful one,” and nudge it toward the ambush.

Yama no kami would be placated with the kebokai ceremony to return the bear to its divine ancestors, the bear spread on its back, nose pointing west, sacred chanting. Pieces of heart, liver, and loin skewered on twigs and burnt as offerings. Back at the village more respect and prayers offered at the local shrine, the meat distributed in equal shares before a celebratory feast.

When spring awakened the sleeping bears and the snow was packed for easy walking, the hunters would again move to their mountain cabins, the village more than ready for fresh meat, willing and hungry to greet the sacred bear on its rebirth. Summer was for tankara fishing, long bamboo rods reaching across mountain streams to dapple hand-tied flies over iwana, char. The fish were augmented by Sansai, edible native plants, plus fruits, mushrooms, small birds and hares.

For centuries this natural cycle fueled the wild mountain biome, the Matagi spears giving way to bows and arrows, those to rifles. Rock and river. Birch and pine. Grass and shrub, hare and wolf, raccoon dog and copper pheasant, black bear and Matagi. Integral parts of the living mountain, of yama no kami. Swirling like autumn leaves in an eddie, ebbing and flowing like a snowmelt stream. Eternal.

And now dying. Black bear and Matagi dying from roads, ski resorts, plantation forestry, lowland culture. Young Matagi, like young people everywhere, succumb to the sparkle of technology and urban peer pressure. They do not wish to revere the mountain, to climb the hills, endure the snows, find the chestnuts, stalk the char, hunt the mushrooms, or slaughter the bear. Not when they can ‘Snap Chat’ and ‘Instagram’ and idolize rappers while eating sushi and rice noodles shipped up from the coast.

Like all hunter-gatherers, the Matagi lived in harmony with their prey, their mountain, without endangering either. They were classic hunter-gatherers for classic reasons, their innovations evolving naturally in response to their environment. Today they are endangered, pushed to the brink by agriculturalists who want to protect the sacred bears while violating their world with roads, ski resorts, housing, and plantation forestry