The Last Grizzly of Texas. 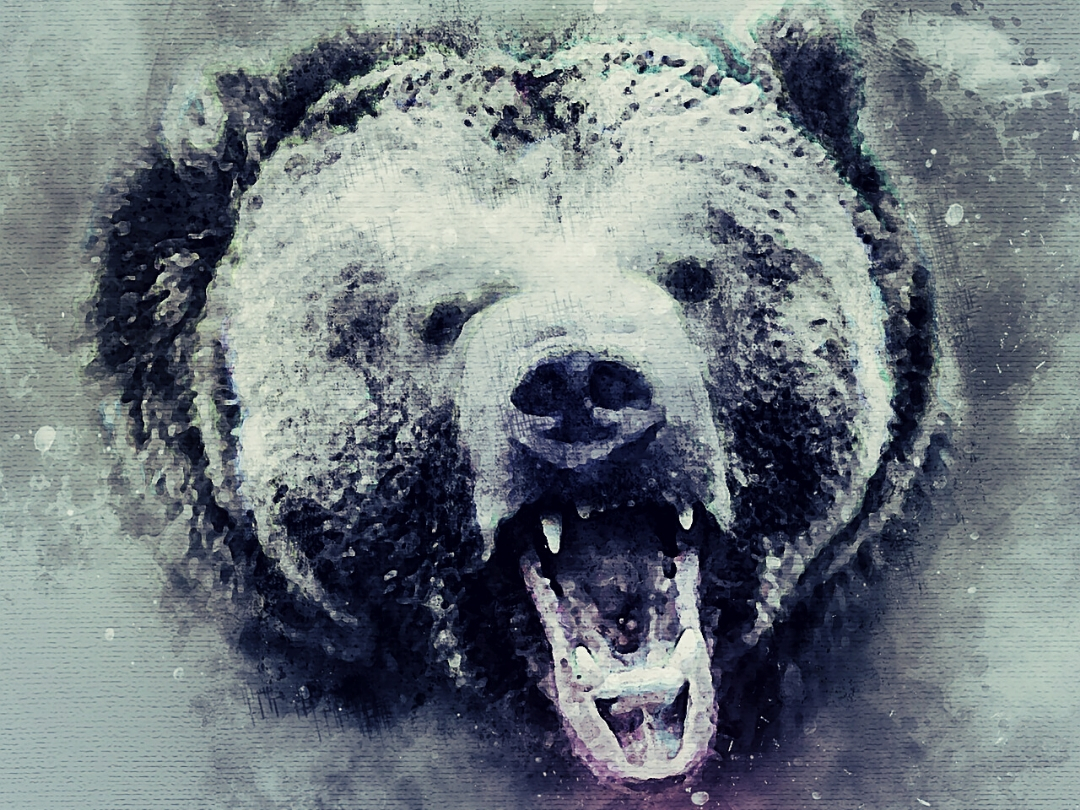 Rearing tight on the reins, C.O. Finley and John Means brought their horses to an abrupt halt within a storm of dust and frothing sweat.  Below them, the thin mountain air reverberated with the howls and yelps of pack dogs attempting to bay a bear.  Stumbling down a rocky bluff toward the commotion Finely and Means paused momentarily to acknowledge the stark change in the dog’s tone.  Yelps of excitement changed to that of fear and the mountainside was soon littered with dozens of dogs fleeing uphill and away from danger.  Confused and angered by the pack’s sudden change in direction, the men hastily turned the dogs back to the carpet of thick scrub brush and the rest of the pack below them.  The dogs began their descent just as the sound of a dog being mortally wounded sliced through the mountains.  The men continued pushing the frightened dogs downward all the while wondering what could make almost fifty trained bear dogs flee in terror.

Finley and Means had been hunting black bear in the Davis Mountains of far West Texas for years.  The bear hunts had become an annual event that friends and families looked forward to all year. The hunts were a family oriented and included men, women and children, old and young alike.  Liquor was prohibited during the hunt and a minister was brought along, according to Finely, to keep camp “as clean and free of bad language as possible.”   The hunt that began on October 29, 1890 was no exception as friends and relatives ventured from as far away as Ft. Worth and San Antonio to participate.  The eventual outcome of the hunt however, was unlike anything the party had ever experienced before.

In the first four days of the hunt Finley, Means, and the rest of the hunters had faired well, having taken”…a bear or two and some blacktail deer each day.” Five days later, on November 2, things changed dramatically.

Following a morning of poor luck and false leads, the dogs finally hit upon a fresh trail shortly after lunch.  The mounted hunting party followed the best they could but trailing the dogs through dense thickets of shin oaks and pine proved to be almost impossible.  In attempts to follow the pack from above Finley and Means took to higher ground. After skirting the thicket for about a mile the men crossed paths with the pack just as they entered a small clearing.

The dogs quickly bounded upon the remains of a dead, four-year-old cow.  Studying the animal Finley and Means determined the animal had been dragged more than a hundred yards from where it had been killed.  As the pack circled the area trying to reestablish the scent, the men wondered aloud at how large of a bear could kill and drag a cow of that size that great of a distance.

The men’s discussion was cut short when the pack exploded across the clearing and onto a rock strewn cliff side.  Finley and Means spurred their mounts forward in an effort to keep up.  Taking the lead, Means quickly spotted the bear just ahead of the pack and shouted, “Otie, I see the old devil!”

Steering their horses at an upward angle the men dug in their spurs trying to get parallel to the pack.  The bear headed in the opposite direction, taking the pack further down hill and into a thicket below.  Finely and Means gave chase arriving at the thicket just as the bear and the commotion that followed exited the other side.  From their vantage point, all they could see was a blur of heat-distorted motion rushing across the canyon floor before vanishing into yet another stand of scrub brush.

Finley and Means cut across a rocky bluff to within 125 yards of the thicket and quickly dismounted.  Saddle guns in hand they stumbled over rocks toward the violent exchange below.  Forty to fifty dogs suddenly howled toward them in a frenzy of fear and panic.  Kicking and screaming the men pushed the dogs downward and ahead of them.  A cacophony of screams and yelps weighted the air, interrupted momentarily by the sound of bones snapping and the piercing weight of life being crushed from a dog.

The men continued downward until a narrow trail of visibility through the tangled vegetation allowed them their first glimpse at what the dogs so feared.  Before them was a tumultuous scene of a life and death struggle.  Experienced bear dogs either skirted the bear in fear or were thrown aside like limp rags.  Those dogs that braved closer met slashing claws and a muzzle full of menacing teeth.  Seeing their hounds being decimated the men steadied themselves behind a rock and began firing.  Each shot seemed only to further infuriate the monstrous bear and it began, “… to pitch and bellow like a wild bull.”

Finley and Means watched in horror as one of their blue-speckled hounds yelped in pain as the bear crushed its neck and jaw and flung it aside before lashing onto another.  The men continued firing, hitting the bear untold times, until the bear collapsed onto its stomach and ceased moving.  The two men edged closer and closer towards the bear, guns cocked and ready to fire, until they were in 100 or so feet of the bear.

“No, let’s not tear his head up, as he looks awfully big and some of us might want to keep it,” Finley replied.

With some of the dogs continuing to pull at the bear with no response, the men knew the bear was dead and moved in for a closer look. It was then that Means first realized the enormity of the bear.  Studying the animal’s size, the gray-tipped hairs on its back, and the large hump on its shoulders Means quickly concluded what he and Finley had done.

“Otie, we have got a grizzly!” Means screamed, throwing his hat up in the air.

Shortly there after, the rest of the hunting party finally arrived.  Seeing the 1,100-pound behemoth that Finley and Means had taken the hunting party couldn’t help but cheer and give shouts of praise.  In the decades to come, the Finley/Means grizzly would be accepted as the last grizzly taken in Texas.