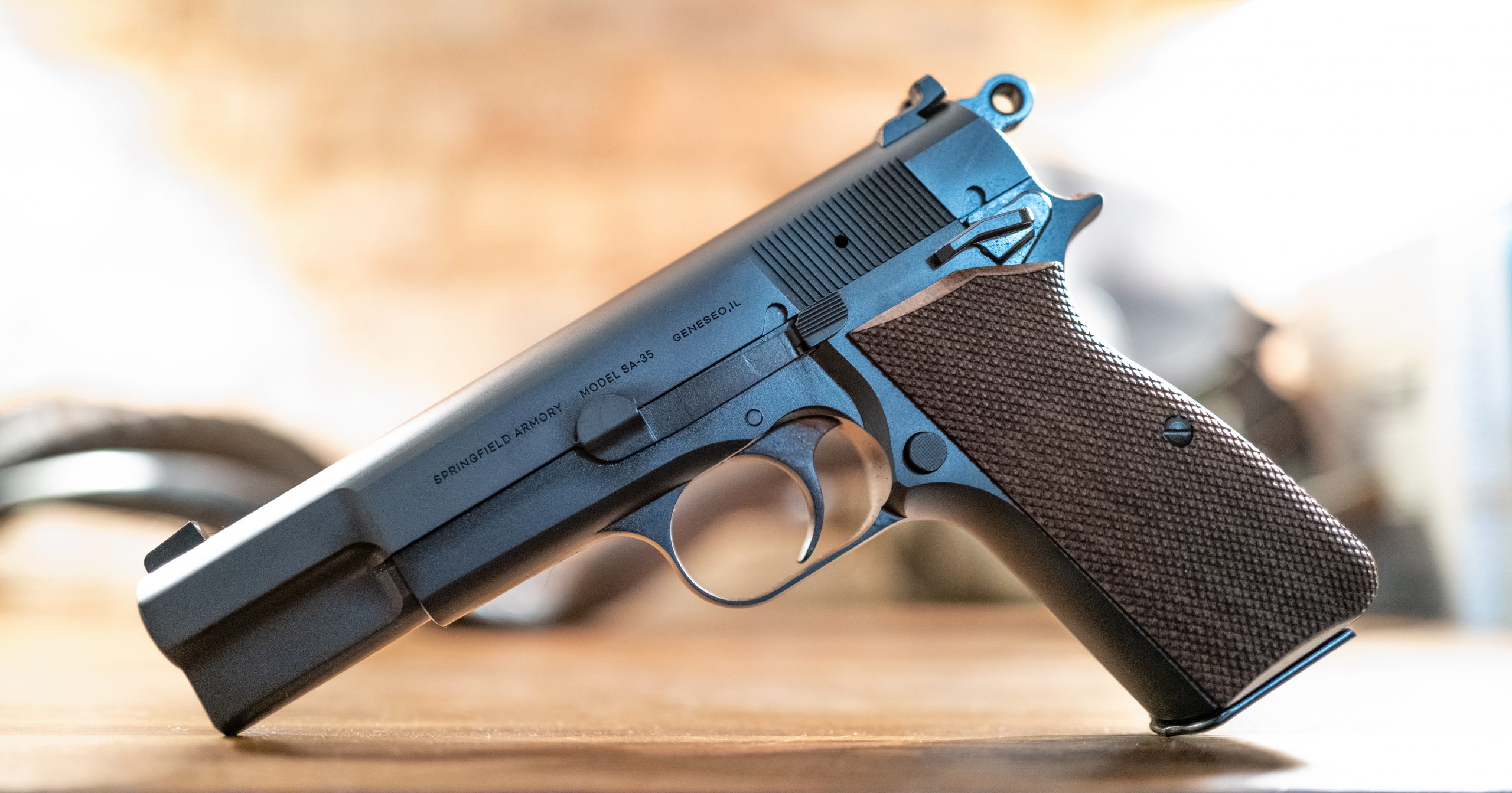 The phone call from the gun shop went like this:

Gun shop: “Hey man, there’s a gun here from Springfield for you.”

Me: “I’ll be there in 5 minutes. Don’t take any photos of that thing.”

FE staff were asked to keep Springfield’s new SA-35 a secret when they told us about it a few months ago. This has actually been somewhat hard to do because I have plenty of friends who’d really want to know about the all-American-made version of one of history’s best sidearms.

Millennials may only be interested in red-dot-ready pistols, but not the ilk I run with. We like classy killing machines…and that’s just what the SA-35 is. It’s a modern Hi-Power.

In my opinion, Browning’s Hi-Power was as significant a gun design as Colt’s 1911; what the Colt did for the .45 caliber, the Hi-Power did for 9mm.  What’s more, it’s amazing both these guns came from the same genius mind. I’ll truncate the history lesson, but the short version goes like this:

Basically, John Moses Browning had already seen great success in the handgun design world after the implementation of his Colt 1911, but he was pretty handy when it came to engineering any type of small arm–pistols, shotguns, rifles, and full autos. His business card could’ve read:

Best Gun Designer in the History of the World.

Did you notice that period at the end? Anyway, sometime between the two world wars, when Belgium’s Fabrique Nationale (FN) wanted to best the 9mm military sidearms currently available, they called Johnny and he went to work. He drew heavily from his 1911 design to incorporate similar concepts (but not similar enough to get sued by Colt, to whom he’d sold the 1911 design); For example, he increased the 9mm’s capacity to 13 while also making it slightly more compact.

With the gun still needing several refinements, the guy who developed the high-cap magazine for the Hi-Power, Dieudonné Saive, kept working on it. By 1935 it was ready for service. It was called the HP-35.

Fast forward many years, a myriad of global conflicts and plenty of blood spilled from both bad guys and good, the Hi-Power is still in use with militaries and police around the world. Even more miraculously, they’re still in style. Hell, Muammar Gaddafi was carrying a gold-plated Hi-Power in 2011 when he was captured while simultaneously having a bayonet rammed up his keyster. (Apparently, 13 rounds weren’t enough to keep that from happening.)

In 2018 FN finally discontinued the Hi-Power, but companies in India and Turkey have somehow continued to make them. You might actually be able to buy one of these disgusting variations, but the rest of us gun snobs would treat you as a leprosy-ridden peasant.

Indeed, the Hi-Power should only be made in two places: Belgium or the United States of America.  Springfield’s new version is made right here in Illinois.

In typical Springfield fashion, the company made a few slight improvements to the Hi-Power without compromising the purity of the design. Its frames and slides are now forged as opposed to cast, and its barrel is now cold hammer-forged rather than drilled. The gun’s hammer has been reshaped to keep the web of your hand from being bitten–one of very few common complaints of the old gun. Likewise, the old gun’s stiff safety was remedied by extending it ever so slightly to make it easier to operate. And the magazine departs from the original by holding 15 rounds instead of 13.

Perhaps my favorite Springfield design update is the SA-35’s new trigger. I (as well as damn near everyone who’s ever shot a handgun) place great value on a good trigger because it’s the one upgrade that can almost always improve a gun’s accuracy and its overall shooting experience. While Hi-Powers historically have owned lack-luster triggers, Springfield removed the magazine disconnect to clean up and lighten the pull. This translates into supreme accuracy on the range.

Speaking of the range, I have coffee every morning with a group of wise elders a few years ahead of me on life’s grand timeline. One of them, Doug Calvert, asked me if I wanted to shoot with him while he practiced with his Glock for the qualification course required annually by his church security team. I took him up on his offer and brought along the top-secret Springfield for him to try. Doug’s a shooter so he made short work of the drills mimicking his qual course. Then he moved to the SA-35.

He literally cut his group size in half.

I have personally put an obscene number of rounds through my test-sample SA-35. I’ve been shooting the gun just as it came without performing any initial cleaning, upgrading, or breaking in. (I’ve always thought a true pistol test should be conducted exactly like the gun comes from the factory.)

The Springfield SA-35 has had zero malfunctions, and I’ve found it to be a gun that really encourages accuracy. By that I mean it seems to be very forgiving. At times when I felt maybe I didn’t have the steadiest trigger pull, my shots still wound up in the cluster.

In sum, Springfield has a history of producing high-quality, timeless firearms. I own several and I’ve always held them in high regard for their quality, but none has ever impressed me as much as the SA-35 has. It’s a vintage design with inconspicuous modern improvements that truly make it better. That Springfield Armory named its new version the SA-35 is an obvious tribute to the history of the firearm, while also claiming it under our flag.

Post-script:  I ran into Doug at the grocery store today. He was so impressed by the SA-35 that he asked if I could help get him one as soon as they’re offered for sale. He said he’s going to shelve his Glock for the Springfield. This means that the SA-35 will literally be doing the Lord’s work soon enough.

*Pure modern performance from a gun that’s been in service for almost a century.

*It’s not gold-plated like Gaddafi’s. Say what you want about the vile bastard, but the man had good taste in flashy guns.