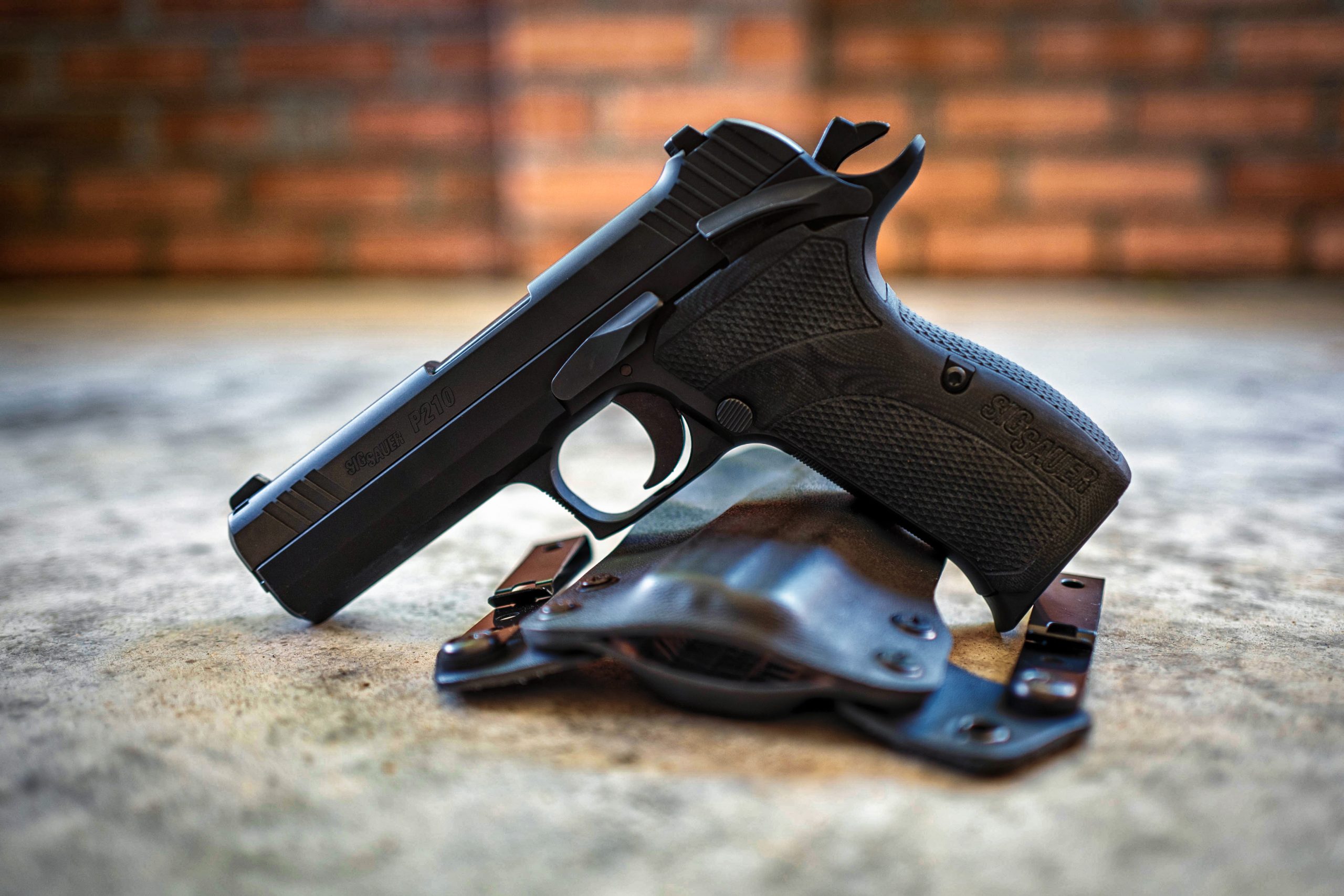 An obviously well-heeled gentleman climbs out of his Mercedes G Wagon and pulls back the sleeve of his tailored suit jacket to check the time on his Rolex. How disappointed would you be if that dude is carrying a $400 polymer-framed 9mm inside his waistband? Just the thought offends me. Someone with that kind of taste needs to carry something with style, something built with the same attention to detail as the rest of his possessions. That guy should be carrying Sig Sauer’s P210 Carry.

The original P210 was a classic Sig handgun and was one of the finest sidearms ever produced for military and law enforcement use. A decent Swiss-made example will run you $4,000, and they’re worth every penny. In 2017, Sig Sauer began producing U.S.-made P210s, guns inspired heavily by the originals. Sig’s engineers were able to maintain the spirit of the original, while adding a more useful manual safety and mag catch. They effectively Americanized the gun without cheapening it.

The all-steel guns are ridiculously accurate, solidly built and heavier than shit. Great range guns, not ideal for life on the mean streets. Five years into the American P210’s life, Sig Sauer did the unexpected: they designed and released a lightweight and compact aluminum-framed version called the P210 Carry. The release of this handgun gives me hope that, in a nation awash with flip-flops and tank tops, some level of class remains.

Because it’s single-action it can be carried cocked-and-locked which also means it has a 3.25-pound trigger that makes you want to bitch-slap Gaston Glock. The P210 Carry feeds from a single-stack magazine, giving it a capacity of 8+1. If the thought of walking out the door with fewer than two dozen rounds in your mag is terrifying, this is not the gun for you. Maybe you should consider moving to a better neighborhood? For the record, a Norwegian named Jan Foss used a P210 to win the second-ever IPSC World Shoot back in the seventies, leaving a field of 1911s and Browning Hi Powers in the dust.

There aren’t many holster options on the market for this handgun yet. I had the guys at Blackpoint Tactical make me one of their Mini-Wing IWB holsters for the single-stack Sig and carried it long enough to establish that it is light and compact enough to carry on a daily basis but big enough to shoot really, really well. With checkered front strap, textured G10 grips and a low bore axis, the P210 Carry is easy to hang onto.

Today’s striker-fired plastic guns are amazing, but no one will accuse them of being graceful. For those who demand a higher level of fit, impressive accuracy and a trigger that makes truly great shooting possible, this might better suit your taste. The P210 Carry is not everyman’s carry gun and—based on most of the people I see in public—that’s not a bad thing.

Pros: A handgun you wouldn’t be embarrassed to carry in front of your grandfather: built from steel and aluminum, made with precision and with a trigger you’ll love to pull.