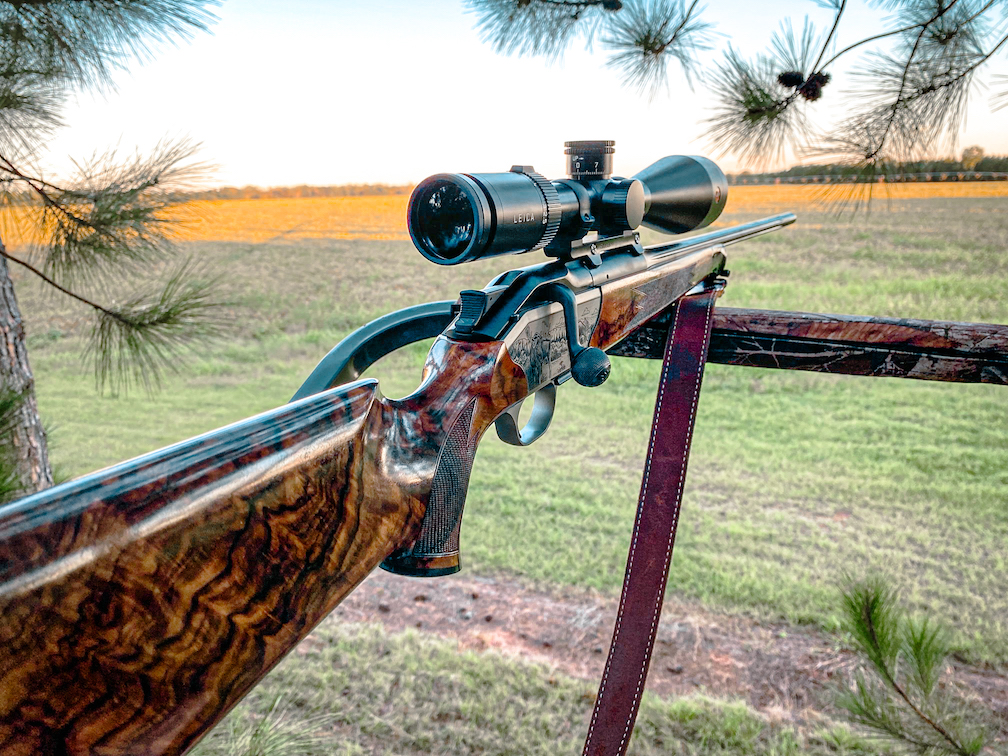 I first heard tell of Blaser rifles when I was a teenager. A strange European contraption—more novelty than notable, really. And expensive. Lord Almighty. It had a confounding collet arrangement instead of a Mr. Mauser’s Holy Locking Lugs, and the damn thing doesn’t even have a proper bolt that turns. How can that be “safe?” Unicorn blood and Dark Magic? The American journals were perplexed and confused by it, particularly when they discovered that it shot. And did it shoot! I have never seen a write-up on a Blaser of any vintage that failed to wax philosophical on the uncanny accuracy of the system.

I picked up my new R8 Luxus, without question the finest weapon in my gun safe, just last week. It was built at my direction and I waited so long to get it (thank you Covid) that I wondered if I had dreamed it. It has my initials on it, so it will be nearly impossible for me to forget who I am.

The rifle clicked together in seconds, eliciting shock and awe amongst the gun shop people, and the action runs like a Rolex. The wood is incredible and the trigger is like nothing I’ve ever experienced in 34 years of handling high-powered rifles. I have been tuning triggers and installing Timneys and fiddling with guns for more than 25 years, at least. I am happy to have the skill and pleased to no longer need it. I am impressed.

I very quickly spotted the secret to the Blaser’s legendary accuracy: a “floating” bolt head and a barrel that locks into a chassis system are quickly obvious, if not terribly new, concepts. What’s new and interesting, at least to me, is the design. When you pull the trigger, a bullet exits the pointy end. That is the only thing the R8 has in common with a traditional bolt-action. The barrel pops off in less than 30 seconds using the handy hex key tool and, if you can afford the extra barrels at $2K apiece, you can be spitting out bullets in any caliber you like in under a minute. The bolt head locks into a recess in the receiver via a multi-fingered collet arrangement that cams into place with a short, straight, throw of the bolt. It’s fast and it’s slick. The whole thing collapses into an almost-briefcase-sized package, which is incredibly cool and makes me feel somehow physically more attractive. I cannot explain that.

At first blush, I wish there was a way to slam a new magazine in it, because: America. But there isn’t. The tang “safety,” which is really more of a “hammer” if you read up on how it works, is stiff and weird, but I love the result which is complete control over the firearm and a gun that can be made, literally, “safe.” My sense is, you get used to it. The whole trigger group pops out which is nice if you want to leave it standing around and lock up the dangerous part. I don’t, so I don’t care. There are some plastic bits in the magazine area which I find entirely inoffensive. Sometimes “plastic” and “cheap” get conflated. There is nothing on this rifle that feels cheap, so let me set your mind at ease.

So much has been written about the design, that I’ll go no further. You can pick up any more details you like with a quick scan of the internet.

I managed to dig up a similarly-fancy new scope and mounts for it, compliments of our friends at Leica, and hit the range with the intent of “working up a load.” As a handloader, this is the process. Step one: Buy new rifle. Step 2: Struggle with it for weeks to get it to shoot.

Range day took 11 minutes. My first three shots went into a ½-inch cluster, then I shot some other loads out of it just for fun, achieving similar results, and we went home … to order more barrels.

The Leica scope, a very fancy 2.5-15x56mm animal with a snazzy red logo on the objective and a very easy-to-use illuminated reticle is both beautiful and functional—not a common combination. It sets up easily, the glass is perhaps the clearest and best amongst all my scopes and, so far, I can find no real flaw in it except this: its scope caps. Why doesn’t everyone have a version of Leupold’s “Alumina” flip-up scope caps? They are fantastic. This scope, plus those scope caps, would be hard to beat. Instead, you get two little plastic round caps that fall off all the time and you find in the road on your way to the deerstand next year. In spite of the scope cap situation, which is industry-wide, I highly recommend the Amplus.

My scopes ride on rifles and they become a very nice team over time, but they do come and go as technology changes, while the rifles tend to show up and stay, permanent members of the family. I have, literally, written out a quick amendment to my will with instructions on who each of my much-loved existing bolt-action rifles should be given to, along with a list of my pet loads for each one.

Otherwise, you can count on finding me afield with the Blaser and the Leica, and I intend for the rig to account for 90 percent of my hunting from here on out. I have commenced with the real-world field test (two hogs so far, a bycatch during deer season) and intend to report on the first ding, which will make me very sad and will likely amuse you. If either can be broken or made to fail, I am confident I will discover how at a very inopportune time and remember it always.