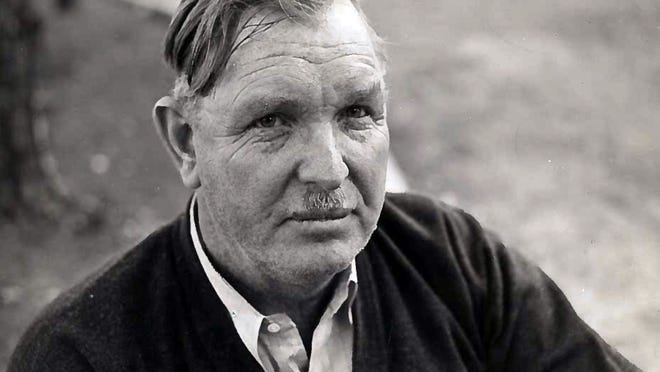 Alvin Cullum York famously wrote on his draft form that he didn’t want to fight.

He then went on to kill so many Germans in World War I that he was awarded the Medal of Honor.

Funny how people change their minds.

Born in a two-room log cabin in the backwoods of Tennessee in 1887, York was destined for a life of hard farming and raccoon and possum eating. After his father died in 1911, York stepped up to help raise his 10 brothers and sisters. He also stepped up to many a local bar where he got trashed and into lots and lots of fistfights. York had a big change of heart and denounced such behavior and other fun activities at a revival meeting in January 1915. York took these newfound ideals to the draft office in June 1917 and answered the question, “Do you claim exemption from draft (specify grounds)?” with “Yes. Don’t Want To Fight” on his official draft form. The Army gave his comments about two seconds of consideration before ordering his pacifist ass to basic training at Camp Gordon in Georgia.

While learning all things Army, York shared with anyone and everyone about his religious beliefs and how people shouldn’t off other people, even during wartime. York’s battalion commander Major Gonzalo Edward Buxton sat York down and basically told him about all the good parts in the Bible where folks kill one another. York took these lessons home on a 10-day leave and after giving them a lot of thought returned ready to kill as many folks as the Army and the Good Lord would let him. This was a good thing as World War I was in full swing. And as such York quickly found himself involved in the St. Mihiel Offensive north of Chatel-Chéhéry, France.

On October 8, 1918, York and 16 other soldiers were ordered to take out some German machine guns that were slicing through US forces. York’s crew quickly captured several Germans and was deciding what best to do with them when machine-gun fire from other non-captured Germans rained down on them. Death of six US soldiers and injuries to another three put corporal York in charge of the remaining seven. York had his men guard the captured Germans and tend to the injured while he got busy sharpshooting Germans.

He nailed so many that six Germans charged York with fixed bayonets thinking this might keep them from getting popped in the head like all their buddies. York drew his M1911 sidearm and dropped all six before they could get to within poking range of him. Since he was up against a true American badass, German First Lieutenant Paul Jürgen Vollmer surrendered himself and 131 German soldiers to York. For being the aforementioned badass, York received the US Medal of Honor and both the Croix de Guerre and the Legion of Honour from France. He was also promoted to Sergeant.

York returned stateside to fame, unlike anything his poor upbringing could imagine. He met dignitaries and movie stars, appeared in newspapers and magazines, and was given a 400-acre farm. His autobiography Sergeant York: His Own Life Story and War Diary sold like gangbusters and a movie about his life called Sergeant York – oh, how original -starring Gary Cooper packed theaters across the land.

York had several strokes later in life and died of a cerebral hemorrhage on September 2, 1964.

I’m Sure You Wanted a Better Photo…