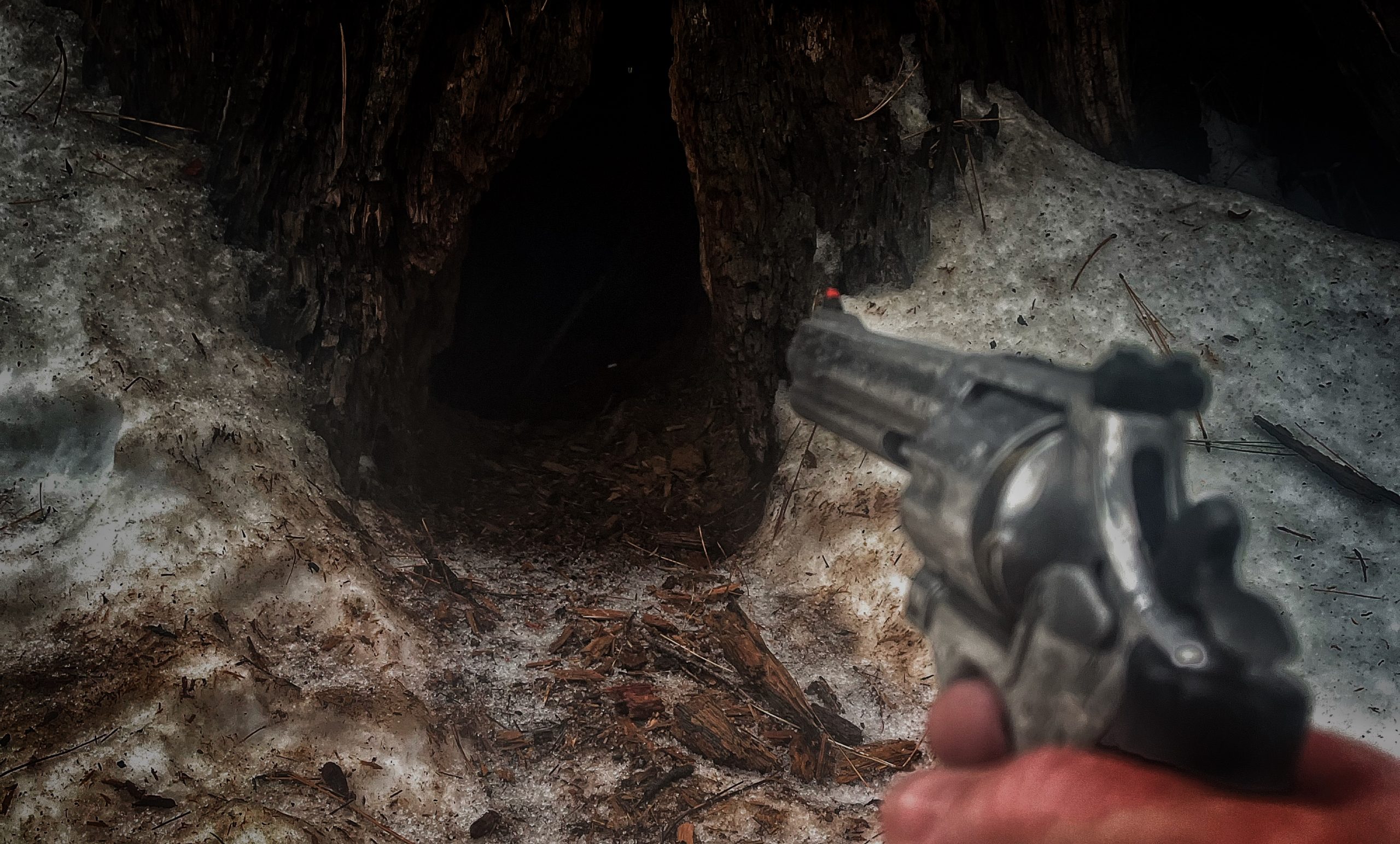 Covered in blood and shit, wedged into the bottom of a bear den, I started to get a little panicky.

A month before, while bear hunting, I’d found a hollow pine tree with a small opening at the bottom and thought It might be the perfect place for a bear to make a den.  Unfortunately there was no fresh sign, so I marked its location and moved on.

For the next 30 days, I hunted everywhere. I watched over springs, followed tracks, and used distress calls; nothing worked. December storms rolled in, and It felt like it was time to give up. But then I remembered the hollow tree I found deep in the forest.

On the last weekend of the season, I trudged through snow and sleet back up to that tree, hoping a bear had moved in.  When I got close, I could see deteriorated tracks in the snow; something was inside, but what?  Moving closer still, I drew the 44 mag from my chest holster while squinting through the pelting rain at the hole in the tree.

A bear head popped out from the darkness. Weeks of hunting had brought me to this unbelievable moment; 10 feet from me was the bear for which I had searched so long.  The bear wiggled out of the hole, and we stood facing each other.  Blinking, the bear looked confused, and I leveled the revolver. Needing to confirm there were no cubs, long moments passed, rain fell.

Finally awake and sensing danger, the bear began clacking its jaw. It was now or never; neither of us could escape, and I aimed for the head. With the muzzle blast the bear vanished back into the hole.

There was violet thrashing inside; the bear wasn’t dead yet; I thrust the gun into the opening and shot again; after the ringing in my ears disappeared, I heard a death rattle from inside.

Making sure the bear was dead, I shakily held my gun in one hand and my headlamp in the other; and leaned into the den: A dead bear, and thankfully no cubs.

The adrenaline subsided, and the realization that I had a lot of skinning work to do set in.  I crawled halfway into the den, grabbed the bear under the arms, and pulled hard; the bear moved an inch. Pulling again with everything, I lost my grasp, and the bloody arms slipped through my hands. As I fell backward the bear’s claws scratched through my fingers.

The damn thing was too heavy to pull out.

Shivering in the rain and thinking hard, my mind recoiled with a fresh idea.  Maybe I could push the bear out with my legs. Shuddering, I squeezed and slid over the top of the bear and downward into the hole. Immediately I knew I had made a mistake; there wasn’t enough space for me to get my feet angled in such a way as to push the carcass upward.  A few futile efforts with my arms and then I had to get out–NOW!

Slithering out, I flopped onto the wet snow.

How in hell am I going to get this bear out?

Not strong enough on my own, I needed help. Going hypothermic, I shivered my way back to a cell signal and called the biggest, kindest friend I knew–a real teddy bear of a man.

“Hey, wanna help me?” I asked through chattering teeth. It was Christmas eve. “I got a real fun job.”