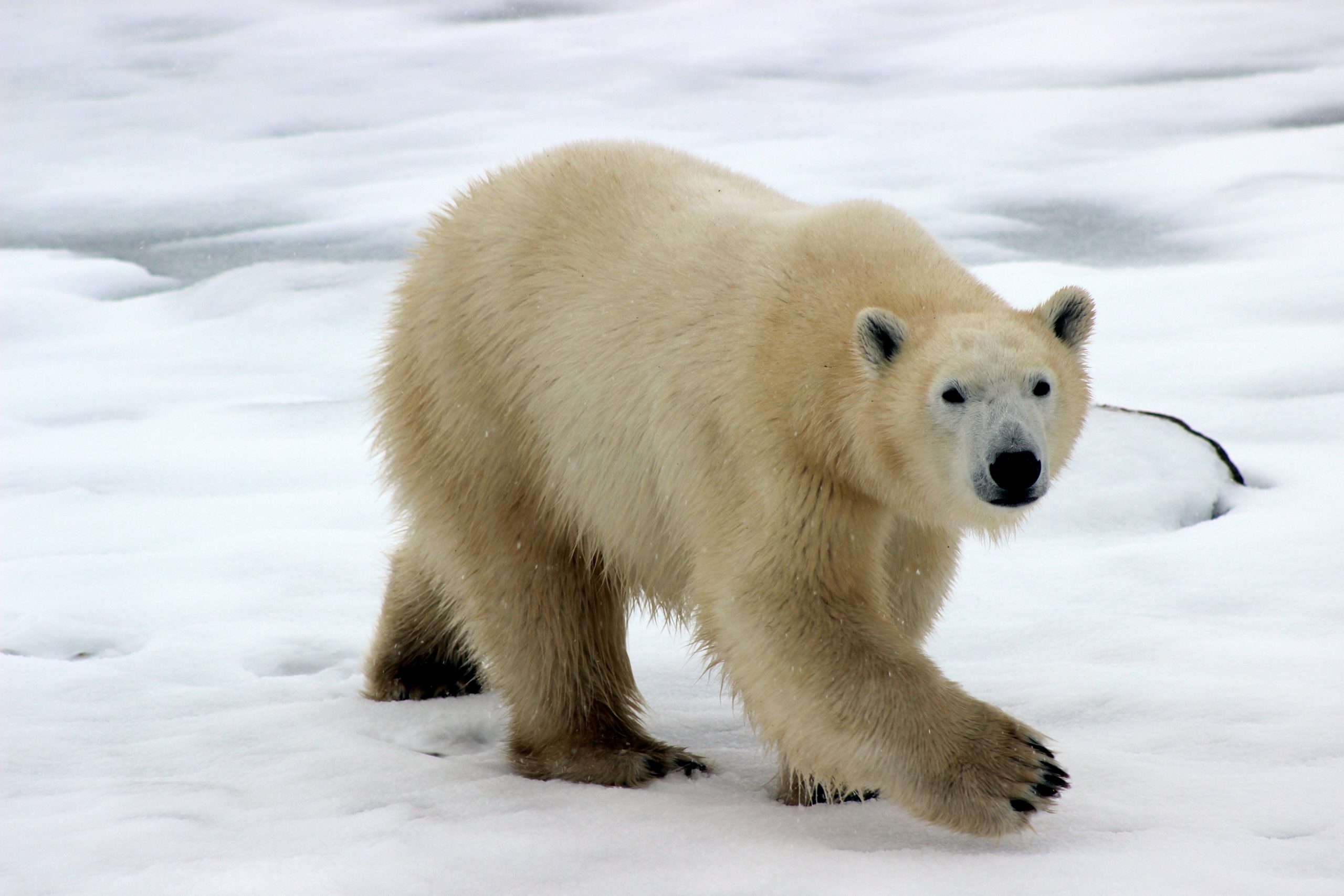 Balmy spring day in the high arctic, maybe Fahrenheit zero, light breeze. Behind us, Baffin Island no longer in sight, nothing ahead but ice; Greenland somewhere over the horizon, big tracks leading that way.

We jumped the bear alongside a maze of pressure ridges, got a quick look, then he was gone into the ice palace, wind on his tail. Too rough for the sled, but perfect conditions on a nice day. We went after him on foot, my two Inuit guides with leashed sled dogs, circling to get the wind.

We found the bear lying comfortably in the lee of a ridge, catching scant rays. On that first brief glimpse I hadn’t been sure …  early in the hunt, costly hunt, my hunt. The Inuit, in their way, on their land—on their ice, rather—wanted to get this done. I did not. They assured me “big bear,” adding, “storm coming tomorrow.” They may (or may not) have said: “You must shoot.” Now, however, at a hundred yards, the bear looked plenty big!

We advanced, the plan to unleash the dogs, to distract the bear for a close and sure shot. Wind now in our faces, the bear couldn’t smell us, but at 80 yards the dogs could, now shivering and holding back. The Inuit tried to urge them forward, but they wanted none of this action. Pressure ridge for cover, we closed to 60. Dogs now whining, straining back against leashes. Thank you so much, no fight with bear today.

A battered .303 Enfield had been on the sled. Noting my guides had their hands full of unwilling dogs—and nothing else—it now occurred to me: My laminate-and-stainless Mossberg in .375 Ruger was the only rifle.

At 50 yards the bear noticed us and stirred slowly out of his nap. The Inuit were now dragging the dogs, no help there. Fully awake, the bear rose to all fours and stared, puzzled. Then he seemed to break into a broad grin. He started quartering toward us, one measured step at a time. Now he got it. We were delivering his pizza. We were on time.

I took a rest over a four-foot ice statue, slipped the safety, let him come … hoping I’d degreased the bolt properly. He stalked us slowly; he owned the ice and was in no hurry. At 40 he turned slightly, offering some shoulder. AimPoint dot a glowing beacon on white fur. He went down to the first shot, bounced up, went down again to the second and stayed. There was an unneeded third shot, GMX passing through and shattering ice beyond. By this time, it had struck me that I should be scared. I was!

Even in death, the dogs wanted nothing to do with the bear, but the Inuit were correct: A very big bear, bigger than I’d dared dream. They know their land–their ice, rather–and were more correct than just that: Too-short hunt over, and two brutal days later, we made it back to Pond Inlet on the wings of a gale-force storm that lasted days. Had we not delivered this bear’s pizza then and there, I may not have had my one-and-only encounter with Nanuq.