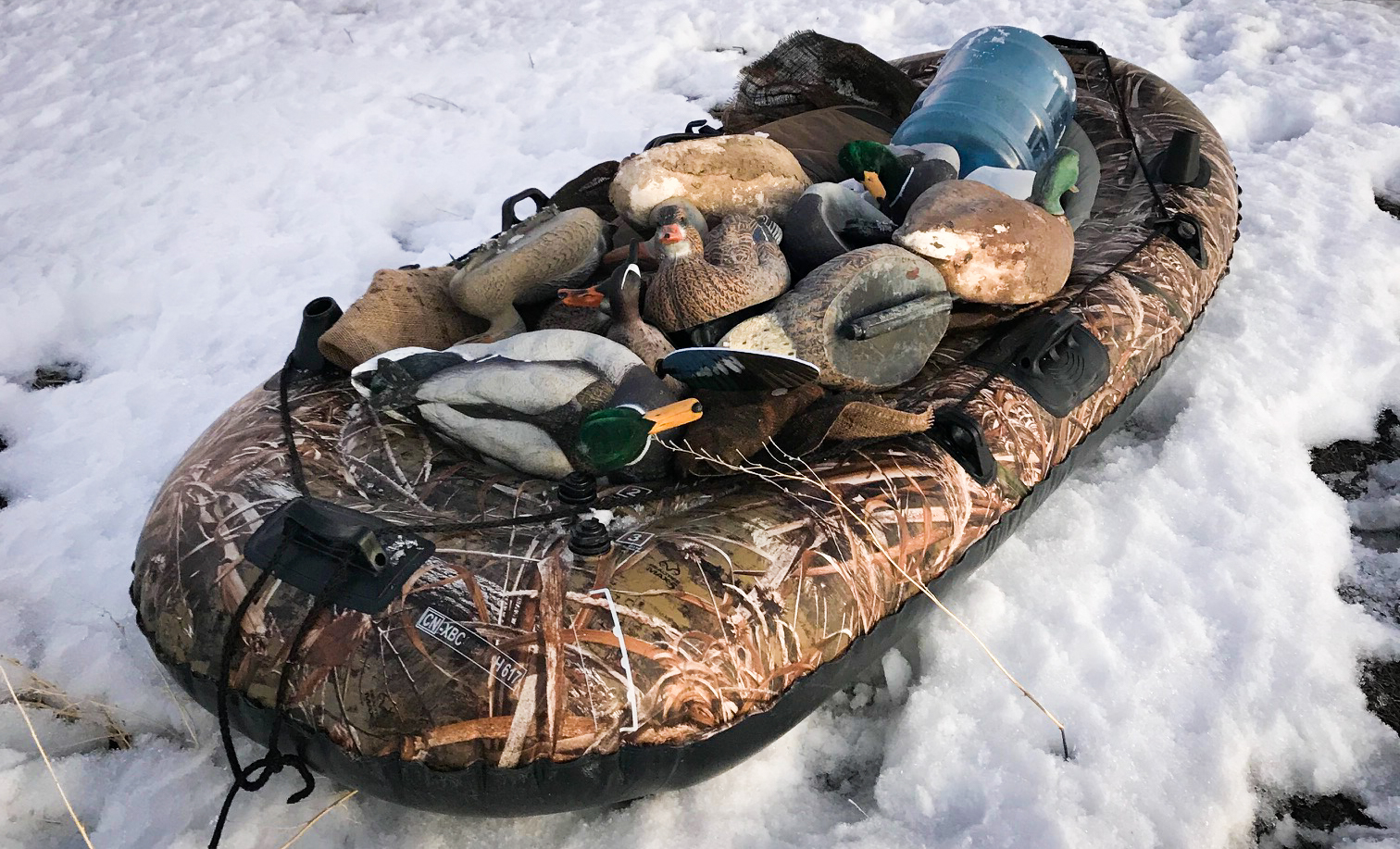 “The ducks don’t know that.”

Hanging up the phone, I reread the local regulations which clearly stated: Waterfowl hunting shall be from boats only.  One problem, it was a dry lake. There were a few inches of snow, but nothing a boat would float on.  But what the hell did I know?  I’d never hunted ducks.

The following day was cold. Dee was by his truck enjoying a cigarette.

“Okay, all this gear has to be dragged out there.” Dee pointed to a spot 400 yards across the lakebed. It looked like a perfect sheet of computer paper.  “My heart condition won’t let me pull the heavy stuff, so you better get the decoys, the shovel, and the 5-gallon bottle of water. Oh, and the shotguns too.”

So I loaded all the gear into an inflatable raft and dragged it over the snow.  It took Dee 20 minutes to pull his empty raft the 400 yards, stopping once for a cigarette and three times to let his heart rest.  While he made his way, I chiseled a hole in the icy snow with the shovel, revealing hard black dirt underneath. It was hard work, and despite the cold, I sweated.

“That’s good, now pour out the bottle in there and spread the decoys in it; the ducks will think it’s water,” Dee directed.  As soon as I poured the water around, it froze on the dirt. It looked dumb to me.

Once Dee was satisfied with our frozen dirt pond, we settled into our inflatable rafts per the regulations, except Dee’s had sprung a leak on the way over and was now flat.  He sat on a milk crate in his deflated boat and smoked. I laid in my raft, held my shotgun, and scanned the sky; it was empty.  People could see us from the road; I felt ridiculous laying in a boat in the middle of a field of snow.

“Let’s hear your duck call,” said Dee. So I tried my duck call, and Dee was disgusted.

“Why would a duck come out here?” I said.

So I went over to the hole to pee and debated if it would be better to concentrate the stream into one puddle or spread it around. That’s when Dee yelled.

Barely finishing, I sprinted back to my raft and dove under my burlap camouflage. Two ducks wobbled down toward the spread. I let loose with the 870, racking fast because I was so damn excited. Three shots sounded like one.

Blood dotted the snow around the dead ducks.  To me, they were the most beautiful ducks in the world. My first ducks ever.

“What kind of ducks are they?” I asked.

“Gadwalls,” Dee drew on his cigarette thoughtfully. “Funny; there for a second it was really pissin’ ducks!”