Never Talk to Strangers (Unless They Have a Fly Rod) 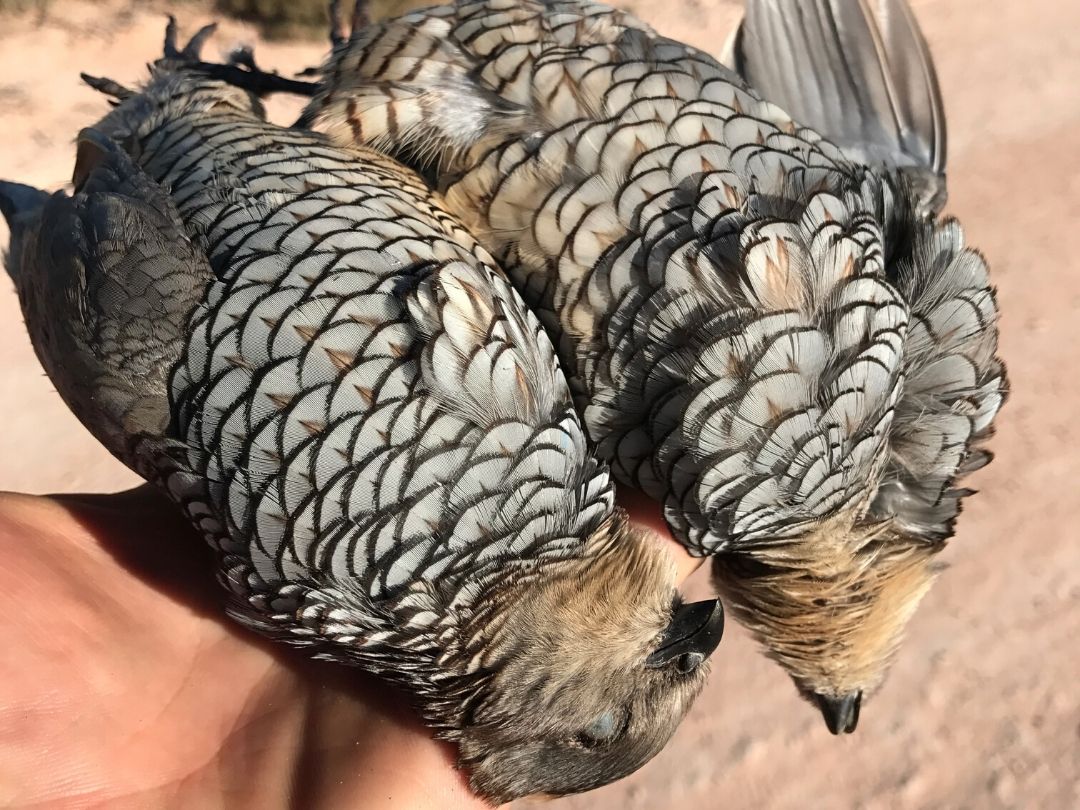 The broken–progress scarred–landscape is an unlikely pairing for America’s game bird.  America’s game bird?  The Scaled Quail, often referred to as Blue Quail, is thriving against a sea of man-made interruptions while the Bobwhite and Grouse are struggling to retain a fraction of their native ranges.  The Scaled inhabits the rolling western plains, much of which is checkerboard with oilfield locations and cattle fence, and with a dose of rain, promises to boom from bust with little help from anyone.  Everywhere we hunt is public, mostly Bureau of Land Management, which means anyone can go, with a little direction.  Sounds like America to me.

For the next week, I’ll be married to the chalk seasoning that blankets these hills, days after I am back home with my wife and boys.  My six and a half pound Italian game getter is having trouble finding its mark, but nevertheless I fill the leather game strap with blue-hued feathers.

Maybe I can excuse my unintentional front-sight focus on thousands of rounds of pistol practice at the department range.  There doesn’t seem to be translation to wild bird wingshooting.  This trip outside the vast reaches of Texas is a first for my (dirty yellow) companion, an almost 2 year old British Labrador from East Texas, but let me rewind before I get lost in the details.

One late January afternoon 4-5 winters ago on the banks of a small stream in New Mexico I met “Jim.” I was following a Blue Wing Olive hatch upstream and had coaxed a few nice risers into my net and was ready to call it a day.  With eight hours of driving ahead, I was quickly stowing my 4 piece and mustered up a nod and casual HOWDY as Jim pulled in.

Jim, not quite old enough to be my dad, without some kind of homecoming night mishap, was cordial and I couldn’t help but pass on the info about the BWOs.  I also spotted Jim’s New Mexico plates and thought I may be crafty enough to glean some info regarding Scaled Quail hunting in the fall.  Jim passed me his business card, a throw back to the days before OnX and Instagram, and told me to give him a call closer to bird season.

Jim likely forgot about our brief exchange midway through the busy work week but I coveted that business card and stowed it away safely until October 1st when I gave him a ring.  A month and a half later I kissed my boy and packed an extra thermos of black coffee as I set off hours before first light.

The plan was to meet at Jim’s house at nine and put boots to dirt by ten.  In case you have forgotten, I will remind you that I am a stranger from a river bank almost a year prior, some common thread uniting folks who are fascinated by feathers.  I was 14 minutes late and when I pulled up, Jim’s hunting truck was running in the driveway.  I knocked on the screen door and was greeted as an old friend–if not part of the family.  Jim’s wife handed me a field lunch and topped off my coffee.  Two minutes later we were on our way.

The first year was peak bird hunting, daily limits with late starts and tailgate bird cleaning in time to shower and eat a proper meal in town.  I’ve been back most years to hunt with Jim and have learned a good deal more about life than swinging a shotgun and finding good cover.

This year, Davy is my secret weapon to ignite flight of the notoriously leggy birds.  I sought out a British Lab to pull double duty in the marsh and uplands.

Davy has a nose like a pointer and has zero quit.  “Biddable” is a term commonly used regarding British Labs, “meekly ready to accept and follow instructions.”  Davy is somewhere between the Coon Hounds I grew up hearing in the hollows of North Mississippi and the big water dogs of his cold Atlantic roots.  So much for biddable, but by noon on the first day, Davy had already located, flushed, and retrieved to hand a hard crosser I folded in what will be a lasting slow motion imprint on my soul.

I looked uphill and found Jim with his double folded watching the scene below.  Jim made his way to Davy and me and snapped a photo.  Jim outhunts me two to one at a minimum, but there was zero competition here.

I relived the shooting as we walked back to the truck.  I realized that there was something lost if I do not offer a stranger the same mentorship Jim has extended to me.  Jim would call it friendship and certainly would take zero credit for my growth I have experienced as a hunter, father, and friend.  A lifelong loaner, more often than not I now make an effort to bring someone along.

The birds grew more scarce as the grass thinned out, overgrazed.  The pump jacks paradoxically provide a haven for the largest coveys we find during the trip, the land leased for oil instead of ribeyes.  Jim and I scratch out a few more birds and decide to call it on a high note.  I may have caught a half grin from Jim after I missed a bird that exploded at my feet.  “What happened?”–sparse words only a lifelong oil field man could weave into an endearing jab.

Leaving for home, I always have a slight subsurface uneasiness that this place will be found out, yet each year the birds are here and I have seen more Western Diamondbacks than other hunters.  I am always reminded that there may not be a next time so I let Jim know how appreciative I am. With a nod I am back on the road.