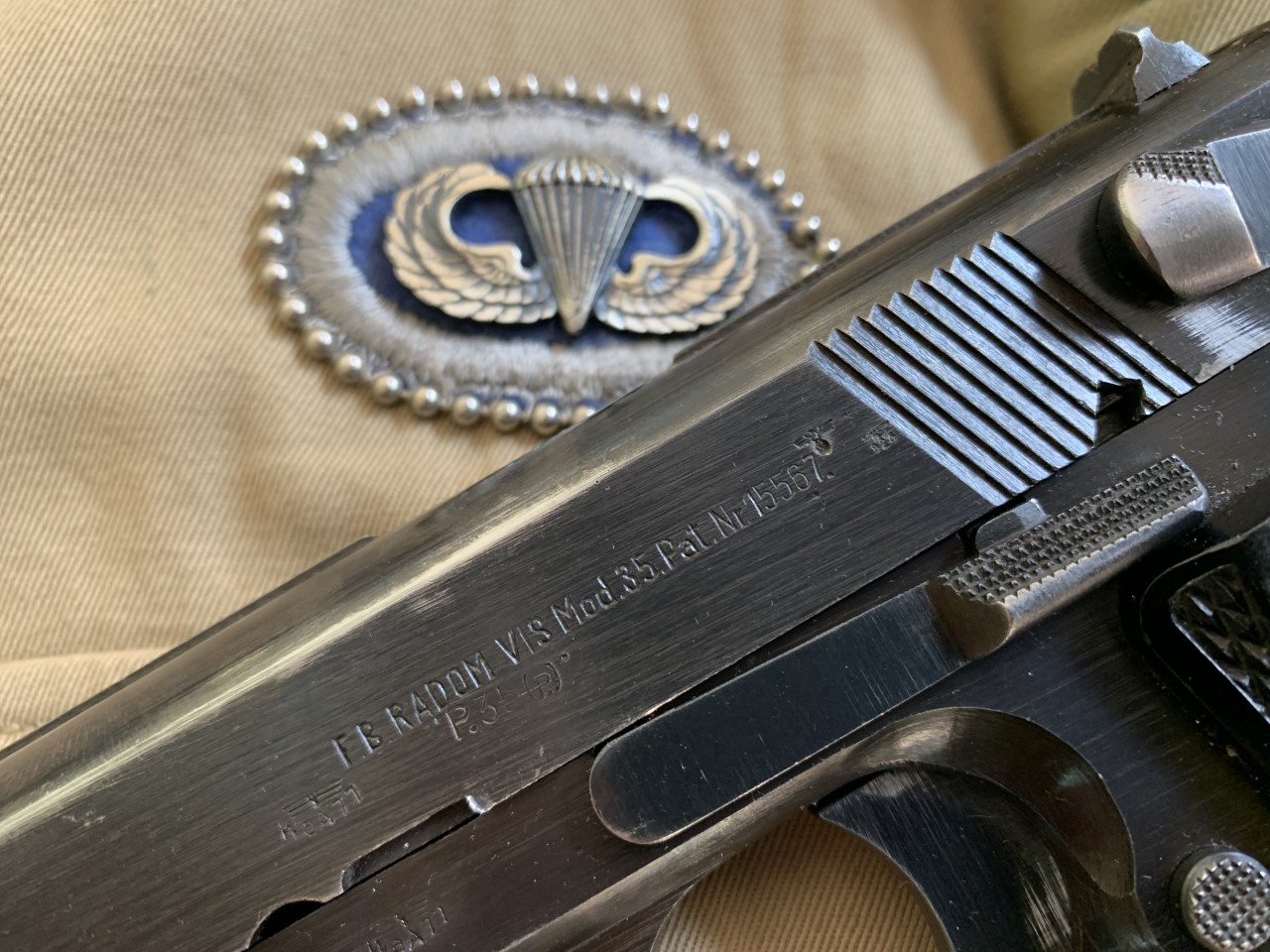 Firearms are tools to me. Guns that are practical and can be used and abused tend to be the ones that excite me. I get why so many folks attach powerful sentiments and meaning to specific firearms, but it’s just not my nature. I don’t fetishize my guns for reasons of nostalgia or history. Except for this one: my VIS Model 35, an underappreciated WWII-era pistol with a complicated story. It once belonged to my grandfather, and now it belongs to me. And even a utilitarian guy such as me can’t help but feel the weight of this pistol’s past.

One time when I showed it to a buddy, he turned it over in his hand and said, “Wow, you probably had to be a real asshole to get issued this.” The Nazi markings on the slide and frame looked out-of-place on what at a quick glance resembles a not-quite-right version of the 1911.

Lots of gun enthusiasts wouldn’t recognize this pistol, yet it is cited by many sources as one of the finest handguns ever made. At the least, in WWII it was at the top of its class. Manufactured in Poland by FB Radom, the VIS Model 35 was designed to serve as the sidearm of officers in the Polish Army. The influence of the Browning Hi-Power drove much of the design, but the pistol also shares some 1911 features, such as the grip safety, single-stack magazine, and trigger design. It’s chambered in 9mm, features a de-cocking lever, has a takedown lever where a 1911 safety would be, and uses an early captive, telescoping guide rod assembly.

The VIS Model 35 no doubt served honorably in the hands of the brave but overmatched the Polish Army in the country’s heroic and brief defense of the German invasion. After the rapid fall of Poland, the Nazi occupiers begin plundering and exploiting the defeated people, and they saw the value of sidearm as fine as the one on the Polish officers’ hips. For a time the Germans continued manufacturing these pistols in the factory at Radom, adding their own Waffen proof marks to the slides, frames, and barrels. They gave it the new designation the “P.35(p).” Various sources indicate that the P35 was issued to German paratroopers, police, and SS officers. The manufacturing of these pistols was still mostly done by Polish workers, suffering under the harsh occupation, as well as from slave labor provided by the Nazi concentration camps. But these factory workers also played an important role in the Polish resistance.

At great personal risk, workers in the plant manufactured parts with duplicate serial numbers and used other means to smuggle pistols to resistance fighters, where the guns were used in partisan attacks and the defense of the Warsaw Ghetto.  When the smuggling operation was eventually discovered, the Nazis executed over 50 Poles, including some in a public hanging at the factory.

After the war, the VIS Model 35 may have gone on to secure a more substantial foothold among world armies, police forces, and civilians, but the factory, along with its tooling and documentation, was apparently destroyed by the Red Army when they drove the Nazis out of Poland and back to Berlin.

As for my pistol, the first owner was likely, as my buddy said, “a real asshole.” I’m glad that I don’t know the details of this particular pistol’s Nazi owner and how he used it. From what we do know about where the pistol was liberated, who it was commonly issued to, and what history knows about horrors of the Nazi regime, the details are probably darker than anything I could imagine.

Jearold “Jed” Freel, my grandpa, served as a paratrooper in the 82nd Airborne Division in WWII, having volunteered because of the extra pay. He was still in training during the 82nd’s famous drops during the D-day invasion, but soon he became one of the thousands of replacements joining the fight. He saw action in Holland, the Battle of the Bulge, and the drive-through German until victory.  He is the one who brought this pistol home from the War. Although he passed before I was born, the story of how he acquired it is now family lore. Grandpa took it from a recently deceased German Lieutenant, while he and the rest of the 82nd Airborne and the 8th Infantry Division liberated Wobbelin concentration camp, near the German city of Ludwigslust, on May 2, 1945. Presumably, the German Lieutenant was one of the camp’s SS guards. What my grandfather didn’t know, what he wouldn’t learn until being reunited back home after the war had ended, was that his brother Harold “Point” Freel, a Tech Sergeant and B-17 tail gunner in the Army Air Corps who had been shot down and captured, was being held in that very camp at that very moment.

My grandpa was not shy when it came to talking about the War and telling tales, but I’m not aware of any more details or stories about liberating the camp or exactly how it got the pistol. Maybe that’s best left unwritten. His brother, however, did talk about some of his experiences as a prisoner in that camp. One that stuck with me was eating horse meat riddled with maggots.

After bringing the pistol home, Grandpa tucked it in a drawer with a few other special mementos. He stowed it in an old GI 1911 chest holster, which it still sits in, the leather permeated with the smell I vividly remember from the few times my grandmother brought it out to show me as a kid.

It shows wonderful craftsmanship and finishes. Some holster and handling wear show its age, but its butter-smooth action rivals any modern handgun that I own. It still does what it was made to do, shoot, and does so flawlessly. It lacks the awkwardness of the more famous Luger or Walther P38, and it brings an elegance that the 1911 frankly, doesn’t possess. It points intuitively, the trapezoidal handle gives a rock-solid grip, and although it has the limitation of an 8+1 round capacity, would be an excellent sidearm today. I would carry it every day, in fact, if it were like most of my guns, just a tool. But this one is something more. I have shot it. A gun like this needs to be shot. But it will likely spend most of its time locked away, a cherished source of family pride in my grandpa’s valor.

I don’t much buy into the mumbo jumbo that an inanimate object can be intrinsically tainted by its past. At the very least, I don’t think it can be tainted in a way that cannot be redeemed by some act, attitude, or gesture of good. I suppose liberating an object through righteous force is a good way to start that redemption. When I think about the Nazi who owned the pistol before my grandfather, what I like to think about most is how he got what was coming to him–which was likely still much less than he deserved.

But I can absolutely feel the weight this pistol carries. This tool, built by conquered and enslaved people, was issued by and used to empower one of the greatest evils the world has ever faced. But it’s also a reminder not just of the bravery of my grandpa, but of all those who rose up to crush that evil. Of the Polish Resistance and the regular people who bravely joined the fight however they could. I like to think that the Polish workers who built this very pistol might have been the same ones who were making duplicate parts, building and smuggling arms for those who would never give up. When I hold this pistol in my hands, the weight is way heavier than the sum of its steel parts.