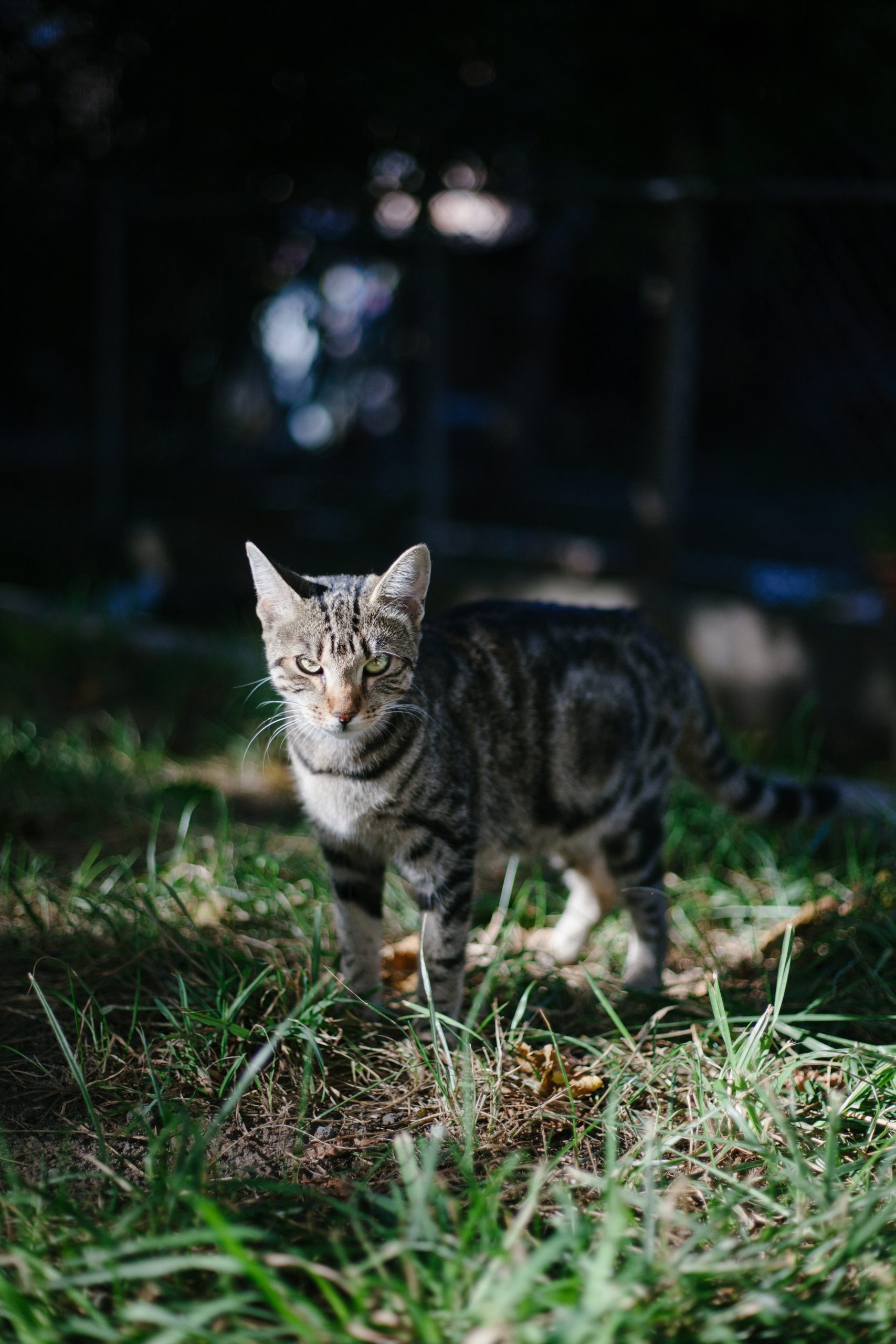 The first time I saw the cat on my woodpile I centered his head in the crosshairs of the scope of my Ruger 10/22.

My only experience with a cat up until then was with a former wife in a former life–and that didn’t go over very well. But something about this cat caused me to hesitate, so I backed off on the trigger. I don’t know why.

It continued to hang around, and it appeared it was eyeing our place as its forever home.

One day I brought home a bunch of rabbits from a hunting trip, skinned and gutted. I didn’t have time to package them that evening so I put them in a cardboard box in the bed of my truck. The temps were in the 30’s so they’d be fine. One of the windows was busted in my truck topper. The next morning a rabbit was missing. I thought maybe I miscounted them. A few days later I put a skinned and dressed jackrabbit in the box. Bad move. A hindquarter was chewed off. At first I blamed the neighborhood fox but then I saw cat tracks in the truck bed. Case closed. The cat was the culprit. Son of a bitch.

My wife began throwing out food and he was more tolerant of her presence. She was able to grab him and took him to the veterinary clinic where she worked. He was a neutered male. We searched for the owner but came up empty. The cat was ours. Damn. I wasn’t real crazy about that prospect.

I’ve always had the utmost respect for predators, but I won’t apologize for killing a bunch of them during a lifetime of hunting. But I’d never seen a predator in action pursuing its prey unless it was in a YouTube video. That all changed when I watched the cat stalking his victim, or waiting along a mouse trail, or still-hunting in the sagebrush. Hell amighty, he was doing exactly what I was doing when I hunted. That’s when I established serious respect for the cat.

Then it got better.

One day he crouched on the lawn, slowly inching his way to a clump of sagebrush. Very slowly he crept forward, tip of tail barely twitching, and then the sudden explosive leap into the bush where he somehow pinned a hapless mouse. Goddamn! What a cat! I almost clapped.

Conditions were perfect for that kill. There wasn’t a breeze, or rain or snow to impede his senses. But he was also able to make successful stalks even when the wind was kicking his ass or a driving blizzard was blinding his eyes. After observing that first kill I called him Mr. Cool. And you know something? Sounds dumb but I learned much from the cat. You could say he was a mentor.

But there was another big reason for my respect of Mr. Cool. We live a few dozen miles from Yellowstone National Park in northwest Wyoming. Our home is in a rural mountain area occupied by every major predator in the lower 48. We’ve had grizzlies and black bears on our deck and wolves on our lawn. Mountain lions have made numerous deer kills within yards of the house. Great horned owls, coyotes and bobcats abound. All of these predators are prime candidates to kill a house cat that isn’t alert. Mr. Cool hunts only at night when his enemies are most active. He’s grounded in the daytime because he’s figured out how to whack songbirds–which mightily pisses off my wife.

Every evening when I let him out I wonder if he’ll make it home the next morning. For eight years he’s survived. That makes us profoundly happy. Fact is, I still don’t like most cats. But as a hunter, there’s something to be learned from that master, Mr. Cool.