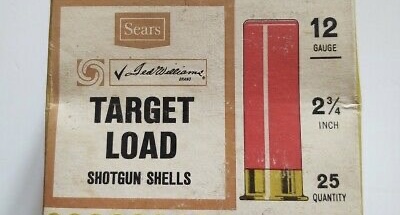 When ammo becomes scarce as virgins, measures must be taken.  And when supplies get critical, you take whatever you can get (ammo, not virgins).  So with rabbit season bearing down, a cursory shell inventory revealed No. 6 shot was dangerously low.  Scrounging commenced, and tucked behind solvent bottles and reloading manuals was a dusty box of Sears Ted Williams shells, part of an inheritance from granddad.  Complete with tax stamp and $3.69 price tag, it was the third-string quarterback whose time had come.  Being a curious bloke, I had to find out why a crotchety ballplayer’s name was stamped on the head of my shells.

The results were a tribute to masculinity and hand-eye coordination.  They were also credentials for inclusion into the American badass hall of fame.  To wit:  Ted once raised the ire of the Massachusetts MSPCA (the PETA-like people) in 1957 by killing over 30 pigeons with his 20-gauge while sitting in left field in front of the bullpen at Fenway Park.  Being a safety-minded fellow, he only did it on off days, but he wasn’t as concerned about the $20 fine for discharging a firearm in the city limits.

He was also a skilled and prolific cusser who despised the media of his day and wanted to be despised by them, and so he never passed up an opportunity to let them know it. He was the same way with hecklers too, or anyone else who needed an opinion.

Brutal, unapologetic honesty. Sounds like a man ahead of his time.

But Captain Ted Williams also laid aside five seasons of a pantheonic career to serve in two wars as a Marine fighter pilot. On one of his 39 missions in Korea his plane took anti-aircraft fire, forcing a crash landing.  He managed it safely, and one can only imagine the symphony of expletives that accompanied the feat.

The aforementioned shotgun shells are explained thusly:  After he retired, Ted famously pursued his outdoor passion, catching thousands of bonefish, tarpon, and salmon on both the fly and conventional tackle.  He killed many beasts in many nations and was a gun nut in general.  So, Sears & Roebuck, the biggest dog in retail sporting goods at the time, brought him on to test and endorse everything in their sporting goods division.  The word ‘everything’ is accurate.  Clothing, boats, motors, fishing tackle, camping gear, rifles, shotguns, and, of course, shotgun shells were sold for many years with the famous signature emblazoned on it all.

Shell shortage or not, the greatest hitter to ever stand at home plate is going to the field with me this year, and I bet the old man slays.