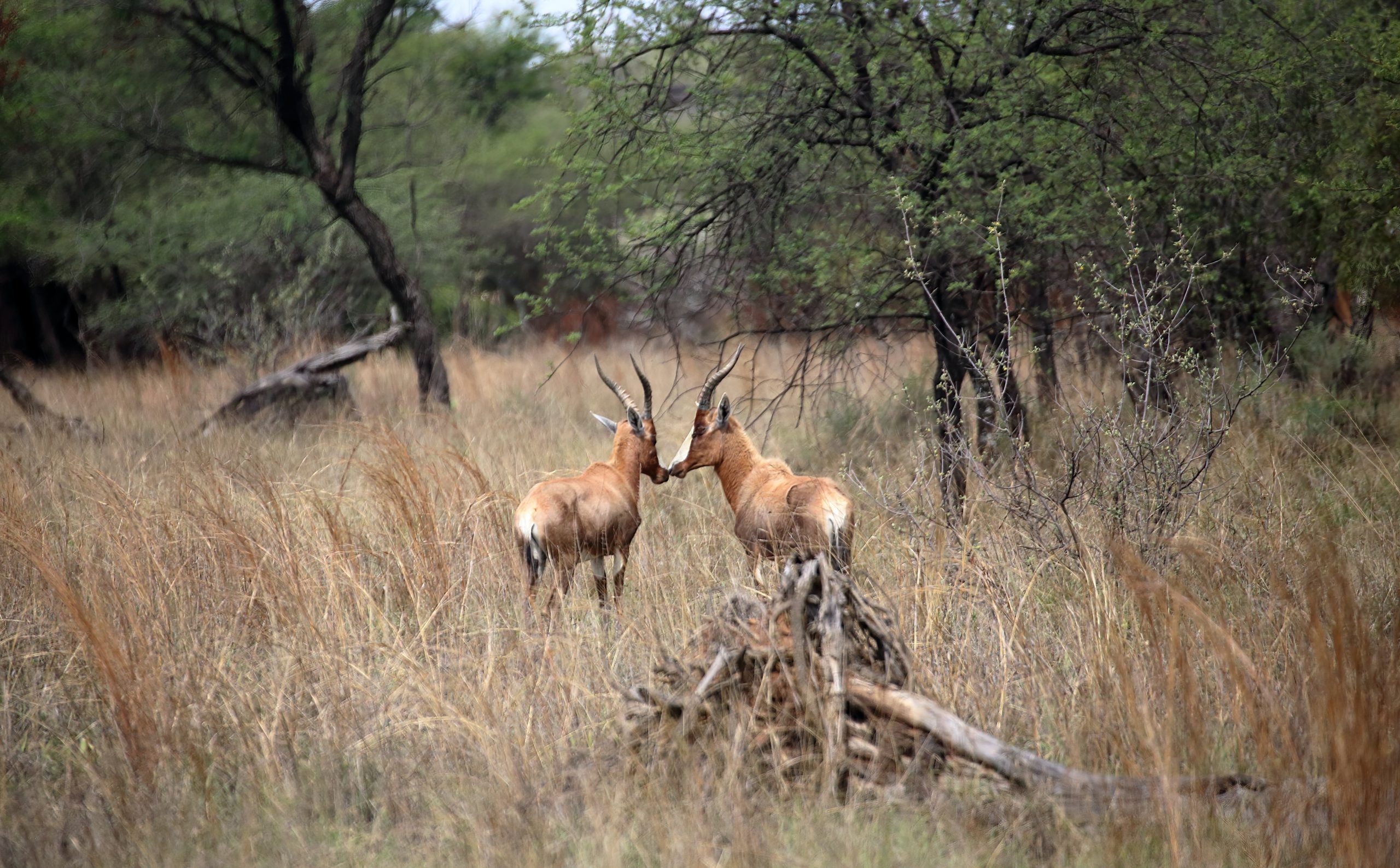 “There’s a nice blesbok in there, 16 inches at least!” Hennie peered through the binoculars at a herd 500 yards away.  We’d been after a warthog for three days with no luck; it was the last night of the safari, and spirits were low. “It’s the same cost as a warthog, and there’s a good one in there, my man,” Hennie said as he grabbed the shooting sticks.

“Okay, let’s do it.” When he heard me agree, Jacob jumped from the back of the truck; he looked thrilled to be moving. Grabbing my rifle, I noticed the sun was red and low, and my heart panged; I wanted the trip to last forever.

The three of us moved quickly through dry grass toward the herd.

We set up near a dead tree; Hennie looked through his binoculars as I placed my rifle in the shooting sticks. The herd was 200 yards away.

“Look over there. See those two by the bush?  And then the other two to the right walking?  Okay, now the one in front of those two.”  Hennie directed, and I desperately swung the scope around, trying to see what he described.

Eventually, I got the target animal in my sight.  The blesbok walked proudly, and I panned the crosshairs with him.

“He’s not down!  Shoot again!”  Hennie commanded. Looking over the scope, I could see my blesbok. He was limping but still strong.

“Shit!”  Quickly ejecting the shell, I shoved another in and shot almost without aiming.  Dust burst up from the savanna behind the blesbok. “Dammit!”  I yanked the rifle from the sticks and ran toward the herd, eager to close distance. Taking a knee, I shot again and skipped a round across the field. The herd was trotting now; I could barely see my wounded animal. Feeling panic, I ran hard and shot again, a hopeless miss. Hennie drove up in the truck, Jacob hanging off the side.

“Get in!” Once I was in, Hennie stomped the accelerator, and we bounced after the herd.

My wounded blesbok was somewhere among a hundred others when the herd split in two.  Hennie slowed just enough for Jacob to drop from the vehicle. He’d track the group on the right, and Hennie slalomed the truck through thorn trees after the left.

Standing in the back with my hands clasped to the cab’s roof, scanning the scattering blesbok, my heart sank. The prospects of finding my animal seemed hopeless.

“It’s not here! Maybe Jacob has something!” Hennie yelled from the driver’s seat; his U-turn almost swept me off my feet.

When we got back to where the herd split, Jacob ran towards us, making a motion with his hand, Hennie immediately understood and yelled an explanation.

“He’s got ‘em!  He can see a track; one of them is dragging a hoof!”  Jacob jumped into the back and began giving directions to Hennie in Afrikaans.

How Jacob found a dragging swipe of a track amongst thousands of others, I don’t know, but at that moment, I realized everything I’d read about African trackers was true.  They could see things that were lost to most of us.

“There! There!  Shoot!” Jacob grabbed my shoulder and shoved me in the right direction.  A blesbok was mostly hidden in a thorn bush; I could only see the rump in the dwindling light.

Jumping from the truck, I shot the animal in the ass; it was only 30 feet away. Jacob ran after it; the blesbok lurched into the brush. Jacob grabbed his tail to stop it from going deeper. The blesbok went crazy, throwing his horns backward. Jacob continued to yank.  I stood like an idiot with my rifle halfway to my shoulder; the blesbok was still alive but there was no safe shot.

In a blur, Hennie barreled past me. The 60-year-old hulk was suddenly in his element.  Leaping as if going for a low volleyball, Hennie tackled the blesbok.  A flash in the dust, Hennie revealed a knife.

“Lemme show you how to do it with a knife, my man!”  While the blesbok squirmed to free himself from the armlock, Hennie carefully directed the tip of his knife behind the animal’s skull just above the first vertebrae. As the blade went in, I could hear steel grinding bone, blood pumped from the wound. The blesbok went limp.

Thrilled with his work, Hennie grinned from behind the dead animal. Jacob was still holding the tail. I stood with eyes wide and my safety off.

“Don’t just stand there; get us a beer, my man!’ Hennie laughed.

We drank beers in the twilight, sitting under a thorn tree in the dust. My last evening in Africa couldn’t have been better.