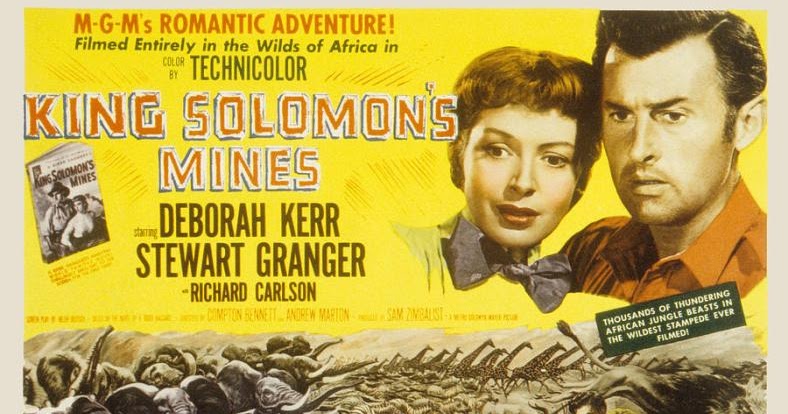 Because of this and more, Allan Quatermain’s a Reel Man.

Played by Stewart Granger in the 1950 classic safari film King Solomon’s Mines, Quatermain is first introduced to the audience while guiding hunters after elephants in 1897 Africa. The hunt goes bad, an African tracker is killed thanks to the cowardice of one of the hunters, and Quatermain rightfully declares, “I prefer animals to humans!” This mantra is proven yet again when we see Quatermain’s home. He lives alone in a house filled with African taxidermy, enjoys drinking, smoking a pipe, and yelling at his pet monkey Lou Lou.

Quatermain’s tranquil evening is interrupted by a curvy ginger by the name of Elizabeth Curtis (Deborah Kerr). It seems that her husband went missing months earlier while looking for the legendary King Solomon’s Mines, and she wants to hire Quatermain to take her and her brother into unexplored Africa to find him. Quatermain’s response?

Quatermain relents after the gal throws a lot of money his way.

The trip into the unknown gets off to a rough start as Mrs. Curtis’ wardrobe is anything but practical. Quatermain takes charge of the situation by telling her to remove her corset and not wear it for the duration of the trip. Curtis is shocked at this but relents only to faint at the sight of a monstrous spider while she’s changing in the bush. The native bearers find this funny and begin referring to Curtis as the lady with the flaming hair.

Later into the trip, Curtis screams out in the midst of a nightmare. Quatermain enters her tent with his shirt off and she’s immediately taken by the sight but then recalls that she has a husband.

Regardless, the sexual tension between Quatermain and Curtis only grows. It grows more still as Quatermain keeps saving Curtis from wildlife in the form of a killer crocodile, a nighttime leopard attack, a charging cheetah, and a stampede of wildebeest, zebra, impala, and … a goat. Really? A goat on the African plains?! What the hell Hollywood?!

Curtis puts all this behind her one day when they camp near a waterfall. She strips to reveal her milk-colored porcelain skin (Watch out honey, you’ll burn!), washes, then cuts her flowing locks into some God-awful-near Dorothy-Hammill-bob-looking-bullshit that Quatermain actually likes. That night Curtis watches Quatermain sleep and, overcome with the lust that any red-blooded woman would feel for a manly man, wakes him for a romp. Missing husband be damned!

The safari soon picks up a 7-foot tall native by the name of Umbopa who just happened to be wandering alone in the middle of nowhere. This is good luck, as by this time most of the bearers had left the trip. The safari gets even more strenuous when the crew is forced to cross a vast desert. The red-headed adulteress collapses in the heat, but Quatermain revives her with a kiss.

The group reaches a village on the other side of hell only to realize that Umbopa is an exiled king. The current king, King Twala, ain’t so happy to see Umbopa and is even less happy to see three whiteys. He has Quatermain, Curtis, and her brother locked in King Solomon’s Mines where all discover one very dead and rotted Mr. Curtis.

Mrs. Curtis is pleased as punch at the discovery as it means closure and the fact that she’s not an adulteress.  Technically, I guess.

The three quickly escape the mine and make it to the village just in time to watch Umbopa and Twala fight to the death. As Twala is killed by a spear through the chest, Curtis acts shocked, then kisses Quatermain like there ain’t no tomorrow.

For his fondness of killing all likes of African game, his like of drink and smoke, and his ability to tame a redheaded temptress, Allan Quatermain is a Reel Man.