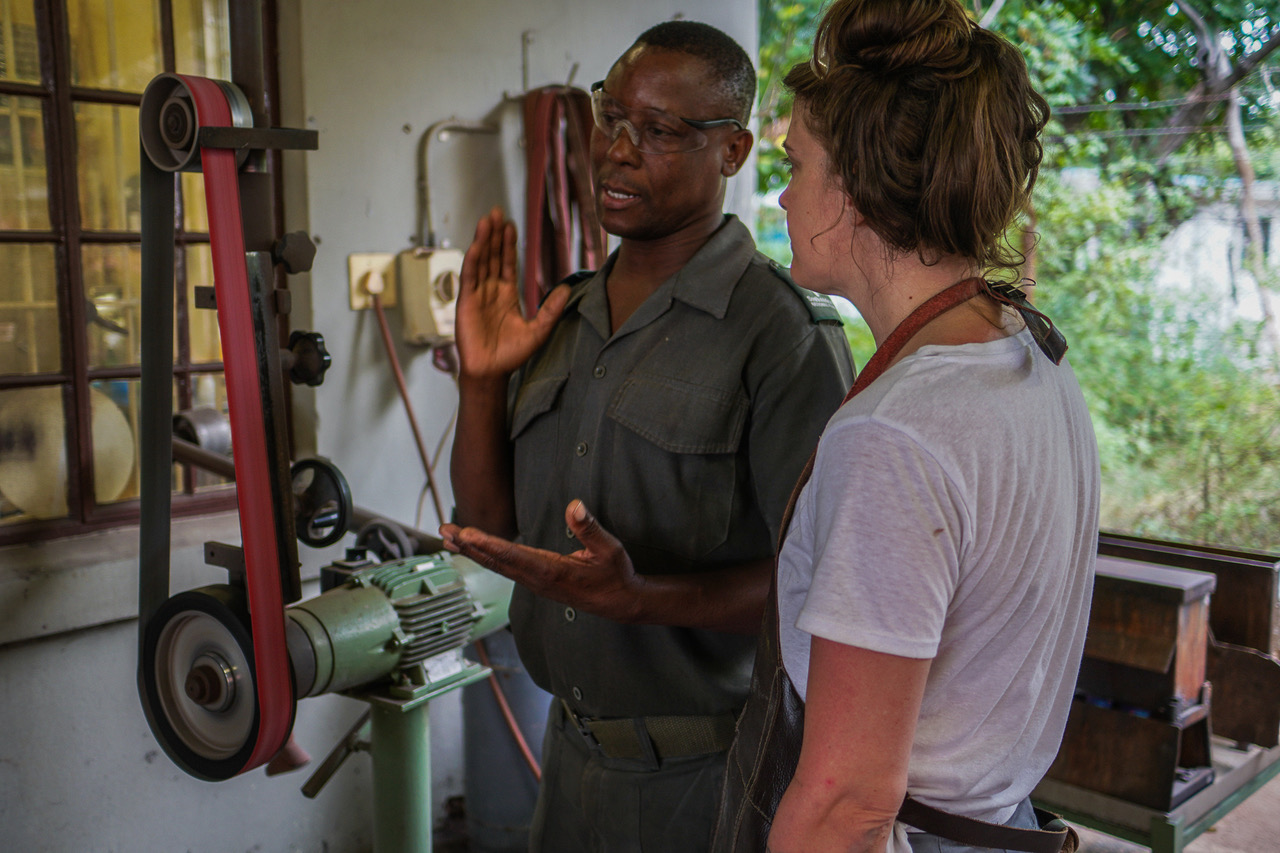 The bakkie bounces violently over the rough road leading up the crest; the afternoon sun has burnt her neck but she looks ahead from behind sunglasses with her hair tied in a knot to keep it from her face. In the past days she’s stood against lions that brought down a big buffalo cow.  She’s watched wind-driven eland herds and followed leopards at sunset.

The vehicle stops; the road ends here in a cloud of South African dust. She proceeds now by foot; through deep brush, pushing through thick thorns behind a team of rangers. She makes it finally to a wide clearing; there, she begins her search. She scours the sand until she finds them; some rusted with brown over brass, some older and of a different make with a faint green patina on copper; spent 7.62 shell casings, fired from Ranger weapons on the battleground of the Rhino War.

You may have heard of Kay Foye. Her knives are utilitarian works of art. The waiting list for a commission can be over a year long. From finding and forging her steel to arranging the art of her handles, her process involves several trade secrets which she guards closely.

What started as a fundraising effort (to benefit the equally secretive non-profit Eco Defense Group) became one of the most incredible connections between craft and conservation in Africa.

The casings she brings to the gunsmith’s shop. There she shaves them, the brass and copper powder mixed into the design of a knife handle; discarded remnants of the battlefield now to be made into knives unlike any other, and fashioned in a place like no other.

Her workshop is a national park full of endangered wildlife–by rare invite only–where alongside the smithing of Ranger-issued FAL FN R1 rifles she sends sparks scattering over her thick leather apron and fends vervet monkeys off of her lunch.

Gathering tabooti limbs, fallen blackwood branches, pins cut from poachers’ snares, shell casings, teeth of animals, feathers from vibrant birds and bones, she crafts designs to give to the rangers so they may carry with them the legacy of their work.

Her presence has become a quiet sensation in the parks. Rangers and staff bring her items found in their daily duty; steel gin traps, wildlife fossils and pieces found that they sign over to her with special permission to layer into each handle. One knife she gives to a lifetime steward in the park; the handle bears the claws of a lion that attacked him.

Kay Foye works in various parks in multiple countries, including in the gunsmith’s office in Kruger National Park, an invitation never extended before to any such outsider.  Certainly never to any knife maker.

From Table Mountain National Park to Liwonde Park, Kruger and beyond, she’s earned unprecedented access and welcome, and the knives in this collection will undoubtedly be sought after by conservationists for decades to come.