Jim Bowie’s Final Chapter: A killer, a lover, an enjoyer of strong drink 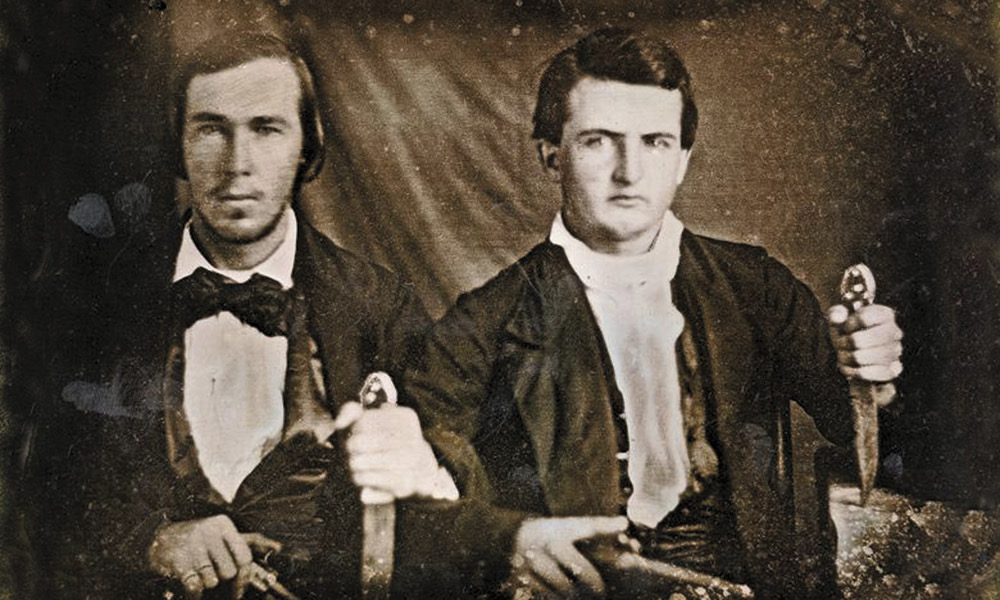 Following the butcher practice party that was the Sandbar Fight, Jim made his way to the Mexican state of Texas in 1828. He was baptized Roman Catholic as was the law for citizens that wanted to obtain land, then spent time traveling between there, Louisiana and Mississippi. He got engaged to a woman by the name of Cecilia Wells in 1829 only to watch her die two weeks before they were to be wed. Jim returned to Texas in 1830 to live in San Antonio de Bexar. He became a colonel in what would in five years become the Texas Rangers and fully renounced his American citizenship to fully become a Mexican citizen on September 30. The latter gave Jim the right to purchase land in what would become Texas and he did so in a speculating scheme that saw him take control of 700,000 acres.

Jim gave love another try on April 25, 1831, when he married Maria Ursula de Veramendi, the 19-year-old daughter of his business partner. He entered into this holy alliance by lying about his age saying that he was 30 rather than 35 and by probably fudging his finances in claiming to be worth more than $5 million in today’s money. One way Jim stayed so rich was by he and his wife moving in with her parents and allowing them to provide him with spending money. Despite having a rich, politically, and socially connected wife 16 years his junior at home, Jim answered the call of adventure and glory once more in deciding to search out a lost mine.

Bowie, his brother Rezin, and a party of 10 others set out for San Saba in search of the Los Almagres Mine on November 2, 1831. Only six miles from where they were to begin the search, the party encountered a massive raiding party of Tawakoni, Waco, and Caddo Indians that numbered some 160 strong. Although outmanned almost 14 to one, Jim Bowie and his men kicked ass and took names for more than 13 hours. In the end, Jim’s party lost one man, the Indians lost more than 40 and saw another 30 injured. This news did not make it to San Antonio. Instead, the city heard that Jim and his men were up against a massive hostile force from which no man could survive. Jim’s wife, believing him dead, even declared herself a window and started dressing like one. She got the shock of her life however when Jim and his men returned to the city on December 6. Jim’s survival and his and others’ story of the battle ran in newspapers throughout the land.

Fate dealt Jim a major blow in 1833 when cholera took his wife, the couple’s two children, and Maria’s parents. Jim took this heartache like a man by pouring stiff drink after stiff drink down his throat. Jim – somewhat – came out of his stupor with the Texas Revolution. On October 22, 1835, Father of Texas Stephen F. Austin asked colonel in the volunteer militia known as the Texian Army Jim to scout for supplies and men in and around the missions of San Francisco de la Espada and San José y San Miguel de Aguayo. Jim and his men found what they believed to be an excellent defensive position near Mission Concepción. On October 28, Mexican General Domingo Ugartechea attacked this position with 300 infantry and cavalry soldiers and two cannons in what came to be known as the Battle of Concepción. The skirmish ended when Jim led a charge on Mexican forces that caused the opposing army to flee.

Despite proving himself, yet again, a badass among badasses, Jim Bowie was unhappy with the crap assignments Stephen gave him following the battle and thus quit his army. Texas declared itself an independent state on November 3, 1835, and Stephen gave his command over to Sam Houston. Edward Burleson took over the commander of the troops in San Antonio and Jim went before him to ask for a commission. Edward refused Jim such. Sam heard this and offered Jim a commission in his army. Jim refused this saying that he wanted to be where the real fighting was and instead enlisted in the army as a private.

Soon after, word came that Santa Anna was leading his army to San Antonio. Jim offered to lead a group of 30 volunteers to the city to defend the Alamo from the forthcoming attack. He arrived to find the ancient mission housing 104 ready and able men and not much more. Despite this lack of men and supplies Jim and Alamo commander James C. Neill decided to hold the Alamo rather than retreat from it.

Jim then began a letter-writing campaign asking anyone and everyone with “money, rifles, and cannon powder” to come to the defense of the Alamo. Davy Crockett and thirty volunteers from Tennessee answered the call and entered the aging mission on February 3. Others followed. James left the Alamo of February 11 to visit family leaving the much younger than Jim William B. Travis in charge. This infuriated Jim and he pledged not to answer to William. Mr. Travis found this ridiculous and decided to let the men vote on who they wanted to lead them, knowing for sure that the men would elect him.

They picked Jim instead.

Jim Bowie celebrated by going into San Antonio and getting so drunk that he released all the prisoners in the local jail.

William was not impressed.

He went to Jim with the suggestion that he lead the regular army and that Jim leads the volunteer group.

And then got so sick with an undiagnosed illness that he was confined to bed in the Alamo.

Santa Anna’s forces attacked the Alamo and after a 13-day siege killed all that stood in defense of her.

Just how Jim died in the Battle of the Alamo has always been a matter of speculation.

One Mexican soldier reported that Jim was carried out of his room on a cot and presented to Santa Anna. Jim cursed the man in Spanish and as a result had his tongue cut out and his live body thrown into a fire. Another report says that Jim was bayoneted in his bed but survived and was taken prisoner. Yet another theory is that he committed suicide. The most probable theory, however, given the way that Jim Bowie lived his life, is that he raised up in his bed, pistols and his famous knife at the ready and fought to the very last.