I’ll Have the Prairie Chicken Please… 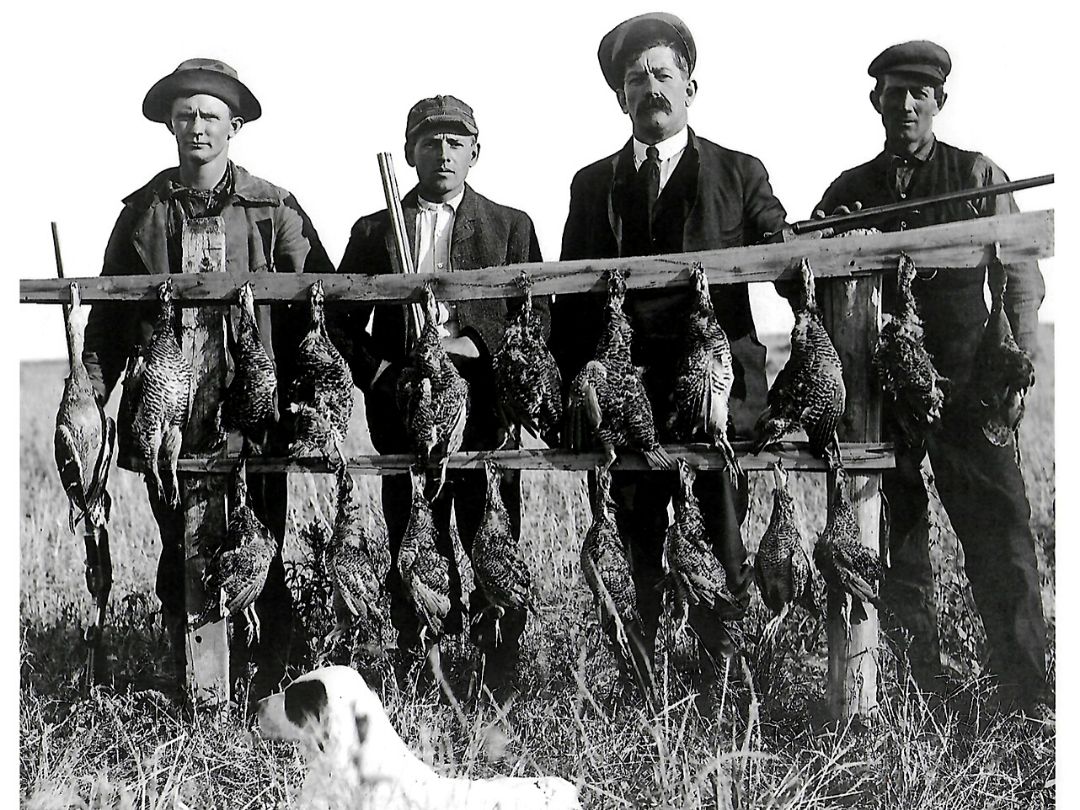 How market hunting brought millions of prairie chickens to the kitchens of fine restaurants.

Mark Twain once wrote a fantasy menu at the end of a long European tour he was on in which the meal consisted of his most favorite American foods. Twain’s menu specifically included the “prairie hen” or prairie chicken. He was so enamored by prairie chickens there is a whole chapter about his love for the grassland bird in the book, Twain’s Feast, written by Andrew Beahrs.

Twain was not the only one who thought prairie chickens were tasty. During the mid-1800’s word had spread about the sweet, fine-flavored, dark-colored meat of the wild chicken of the prairie. The prairie fowl had become quite a fashionable delicacy across the United States, as well as catching the fancy of those abroad. Prairie chickens were taken to several big city markets throughout the United States by scores of railway shipments and wagon trains, mostly shot by market and commercial hunters.

Market hunting refers to hunters of the 19th and 20th century, who hunted then sold or traded the flesh, bones, skins, and feathers of slain animals as a source of income. Market hunters focused on those species which gathered in large numbers for breeding, feeding, or migration. The most notable of these animals that were hunted were the buffalo. Not many people know upland gamebirds also fell victim to this type of unchecked and widespread depopulation of game. Both the Greater and Lesser prairie chicken populations suffered from the hands of market hunting. Although some claim there were enough numbers to support extensive market hunting. Stories told about the sheer numbers of prairie chickens did not help the prairie bird. What it did was draw attention to hunters. Market hunters flocked by train and wagons to states such as Kansas, Illinois, Iowa, Nebraska, Texas, Missouri, Ohio, and Kentucky.

In the heart of prairie chicken country, Kansas was a premier location for market hunters as they could hunt both the Greater and Lesser prairie chicken. Both birds flourished on the plains and southwestern grasslands of the Sunflower State. In 1904, a witness reported counting 15,000 – 20,000 Lesser prairie chickens in a single field where the birds were exploiting maize and milo fields!

It was reported in the 5TH Annual Meeting of the Kansas Academy of Science (1872) that prairie chickens were so abundant they were sold in the markets for $1.50 to $3.00 per dozen. Hunters could hunt them nearly year-round.  The Ellsworth (Ks.) Reporter stated in February of 1875 a hunter trapped 920 prairie chickens in five days!

In Illinois alone, in the 1800’s the prairie chicken numbered into the millions. Mark Twain recalled these great numbers of birds that once thrived on the Illinois prairies across the Mississippi River from his boyhood home. In states such as Missouri and Iowa, prairie chickens once flourished and had thriving populations estimated to be hundreds of thousands. Now these same states are desperately trying to reestablish prairie chickens that were once native birds.

Henry Clay Merritt, author of the 1904 book, The Shadow of a Gun, and a premier Illinois market hunter of prairie chickens – noted in 1860, “I saw in October more birds rise out of a forty-acre field than all the cities in the union could consume in a month.”

It was evident prairie chicken hunting had become such a big business. In North America, market hunting took note of the popularity for the demand of the bird. Market hunters found an abundant supply of game on the prairies of Kansas and a ready demand in the east. Linked by railways, market hunters had an easy way to transport their bounty. Chicken hunters were instructed to lure or draw prairie chickens in and once shot, stuff them with salt and buffalo grass and hang them until loaded to haul to the railroad.

Many carcasses were shipped on ice to north eastern U.S. markets. There are people that suggest and even credit the widespread market hunting of prairie chickens helped in the development of insulating shipping barrels and techniques. One can almost say that is when frozen foods were invented.

A whole culture of prairie chicken was forming. In certain areas of the country railways ran specials for sportsman to such towns and areas where prairie chicken numbers were high. Railroad companies would place iced cars on sidings for preserving prairie chicken kills for market hunters. And it wasn’t just train’s either, specially equipped wagons were built and sold with gun racks, dog kennels, and iceboxes for hunters wanting to trek across the prairie at their leisure stopping and shooting chickens by the barrel.

A skilled market hunter with a well-trained dog could easily kill 50 birds a day. Daily bag limits of 100 or more were not uncommon. The number of prairie chickens killed and sold have been described as, “beyond comprehension.”  Markets used “cord” and “tons” as measures for shipments of harvested prairie chickens. Prairie chickens were shipped in barrels where upon arrival were served in restaurants.

By 1903 the prairie chicken had found its way onto the menu at the oldest restaurant in Kansas City…The Savoy Grill. The eating establishment is housed in the Savoy Hotel, the oldest continuously operating hotel in the U.S. west of the Mississippi River. A regular Who’s Who would dine on prairie chicken, notable persons included ol’ Teddy Roosevelt himself, and John D. Rockefeller.

During this period of market hunting, regulations and laws were being enacted to help secure the future of prairie chickens. Some took the matter into their own hands.

The passenger pigeon and heath hens are at the forefront of the endangered gamebirds. These alarming trends lead to the formation of the first conservation societies. Momentum begins to establish laws that will protect future wildlife. Market hunters in 1900 feel a significant blow to their livelihood when the Lacey Act is signed into law for the preservation and restoring of game and wild birds. It is the beginning of the end for market hunting.

1918 brings about the passing by Congress of the Migratory Bird Treaty Act. It is America’s most important bird protection law that has been enacted. Wording in the legal document allows for the protection to nearly all our country’s native birds. The act finally brings down the curtain on market hunting. This piece of legislative action would be the demise of ordering prairie chicken from the menu from fancy restaurants, but it solidified their continued existence.

Prairie chickens continue to fight for their survival, however in a different sense…habitat. Habitat loss is the single most factor in the decline of both Greater and Lesser Prairie Chickens. Prairies that once stood as a green sea of windswept grasses and savannah ecosystems have now been converted to farmland. The conversion of native prairie to cropland is very detrimental to these birds. If we hunters have learned anything, it’s the establishment of seasons, limits, and protecting and reestablishing habitat has been critical for prairie chickens.

As for me, I will continue to venture out into the open rolling prairie hills of Kansas, walking along the sparse knee-high vegetation behind wide-ranging pointing dogs for the chance to flush a bird that at one point in history numbered along with the buffalo in the millions.