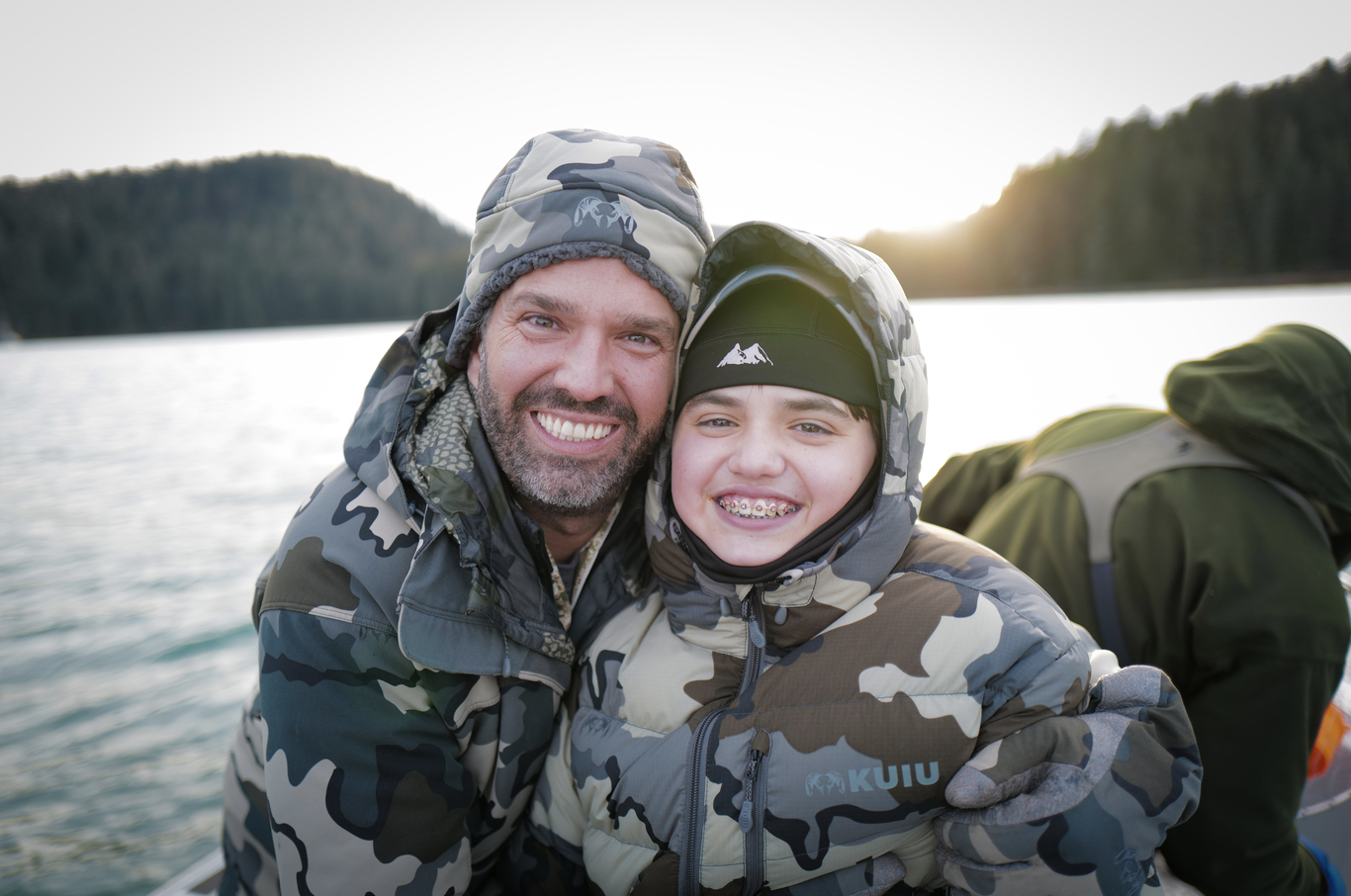 Our trip with Coastal Alaska Adventures was cancelled and then rescheduled before being cancelled again because Don got COVID-19. Because of this, it looked like the trip was going to have to wait until winter 2021. This was frustrating, but unfortunately had become the norm for our hunting trips in 2020.

We finally got an opening to head to Alaska and it looked like it might happen on December 9. The mission was to hunt Sitka deer and then try to find a mountain goat if possible. When the green light came, Don picked up his son, Donnie, in Florida and headed to Seattle where I met up with them at the airport. After a flight to Juno that night, we picked up a few last-minute items and tried to get a little sleep.

On December 10, we climbed into a Super Beaver in Juno and took off for the Tongass National Forrest. A short while later we set the plane down behind an island in the saltwater of the choppy Frederick Sound. A skiff motored out to pick us up and took us back to a 1980’s seventy-foot trawler named the Sikumi. This was not an uber fancy yacht designed to turn heads, but a tried-and-true restored warrior built for the harsh Alaska environment and it was to be our base camp for the next seven days. It truly was the perfect floating hunting camp.

For the next four days we left the Sikumi each morning and stalked through the giant Sitka spruce trees trying to locate blacktail deer. Our guide, Logan Canton, is a former Army Blackhawk crew chief, and while still relatively young, he’s making a name for himself in this area as a top professional hunter. As Logan led us on slow moving still hunt during the day, he pointed out interesting artifacts left behind by Alaskan loggers in the early 1900’s.

Each day in the skiff, we glassed the beaches for signs of deer and took opportunistic shots at ducks that flew close to our small boat. Several mixed bags produced harlequin, scoter, golden eye and bufflehead. They were a welcome break from long periods of looking through our binoculars.

On the fourth day, Alaskan Master Guide Scott Newman arrived to the Sikumi in his WWII style mini-landing craft. I’d heard about Scott before he arrived and expected to meet a Paul Bunyan looking woodsman after learning of his exploits. I was a little surprised to find him looking more like a clean-cut Everest climber but to get where the goats are I guess one needs to be in that condition.

At dinner on Scott’s first night, Ryan, the captain of the Sikumi, put Scott on the spot and had him tell his harrowing story of surviving a brown bear attack on a hunt some years before. Scott blew past Paul Bunyan’s image as he showed Don, Donnie, and me the scars the bear left behind. I quickly realized he may be the most capable woodsman I’ve ever met.

The next morning, we switched gears and began scouting for goats in areas I won’t mention out of respect for Scott safeguarding the areas he spends tons of time scouting himself. You probably couldn’t get there anyway as some of these coordinates require a boat like his, capable of pushing icebergs out of the way as you move through them at idle speed.

As we stood on the deck of Scott’s almost indestructible 27’ landing craft, we were snowed on and windblown as we made our way toward a giant glacier. We spotted several goats in the first area that would safely survive the day due to the fact that any man who tried to get to them would likely die on the climb up. With only two days left to hunt we headed for a different area. This is where the hunt turned into a logistical operation the like of which I’ve never seen and probably will never see again.

We headed to port in Petersburg where Scott keeps a hangar at the dock. Inside the hangar were three Honda 4-wheelers and Scott’s own float plane. Scott drove the 4-wheelers onto his landing craft and we took them to the Sikumi where its crane loaded them onto the roof of the trawler. As we slept, Ryan captained the ship to another of Scott’s favorite areas. Scott and the crew then lowered the 4-wheelers onto the landing craft where Scott strapped a small outboard motor and gas tanks to Logan’s ATV. Then he and Logan staged all three 4-wheelers on the beach for the next morning.

Try to keep up with this.

The next morning, we woke early and headed for the beach. We moored Scott’s landing craft 200 yards from shore and rowed to the beach in a small Zodiac boat. Once at the 4-wheelers, we strapped our packs and gear down and rode for miles through a forest where a trail ended at a frozen lake.

Once at the lake, we put the outboard that was strapped to the 4-wheeler on a 17’ aluminum boat that Scott keeps stashed in the woods and the five of us set off. For two miles we broke two-inch-thick ice at idle speed as we traveled toward another glacier. As the mountains on each side of the lake dropped off into the water there was zero possibility of climbing out of the frozen water should the boat somehow decide to get rid of us.

As we neared the end of the lake the glacier sat at one end with rocky beach areas on either side. We counted 11 goats as we looked though our binoculars at the small white spots dotting the rock faces. We beached the boat at the base of a mountain and climbed out as we watched several goats in the distance. It was then that Donnie nonchalantly informed us that he was looking at a goat 350 yards directly above us on a steep slope.

As everyone scrambled to confirm that this was a Billy goat (a male) Don helped Donnie find a spot where he could stabilize his rifle should a shot be available. In what couldn’t have been more than one minute, the goat’s sex was confirmed and Donnie sent his first bullet from the rifle… an understandable miss at the range and angle he had to contend with. After his second and third shot we all agreed that the goat took a good hit and that we were all very excited that the hard part was just beginning. “He literally could not have gone to a worse spot,” Scott casually explained.

Just what you want to hear from a guy like him.

We spent the rest of the afternoon trying to get to the goat. As we got within 100 vertical feet from the animal I turned and looked down.  As my fear of heights kicked in, I informed Logan and Donnie that I planned on being a survivor of the climb and that another vertical inch was a bridge too far. Someone had to survive to tell the story after all. I glassed down to make sure Scott left the kill stop attached to the motor and that it was still operational. It was.

About 50 feet above us Don and Scott formulated a plan to hike higher than the goat and to cross directly above it before climbing down a vertical rock face to where they thought he’d stopped. Scott asked Don to stay behind.

Later Scott told me he’d never had a client climb to an area like that with him and he really didn’t want to be on the hook for the President’s son falling to his death. Luckily that didn’t happen, but it wasn’t for a lack of opportunity. When Don is on a mission to prove something to himself you just have to get out of his way. A recorded video death waiver is probably prudent when hunting with him.

As Scott and Don made their way to the spot where the goat was last seen, it was as if the animal vanished. This was not ideal, and we left the area as dark was setting in. We broke ice with the boat, loaded back on the 4-wheelers, traversed the forest, rowed back to the landing craft, and headed for the Sikumi. The goat occupied our every thought as we all tried to sleep.

The next morning, we set back off to find the goat, only this time we left earlier in the dark. When we’d gone through the stages of making our way to his mountain, the goat appeared to have come further toward the bottom, and we all spotted him lying dead against some alders on a cliff. “He couldn’t have died in a worse spot,” was all Scott said as he strapped on his backpack. I was really beginning to like this guy.

Don and Scott positioned themselves directly below the goat and Scott insisted he go the last 20 feet himself. Don decided to listen this time as it made no sense for both of them to arrive at a goat that was clearly dead.

“What’s he doing” Don shouted back. Just then the goat decided he’d try his hand at flying and he came over the side of the cliff. We all watched as he made an uncontrolled descent toward Donnie and me. He stopped two thirds of the way down and the guys up top said they’d move into a safe spot behind a cliff off to the side so Donnie could shoot once more. This was actually a safe option, but I remembered me and Scott’s conversation about hunting with the President’s son from the night before. I didn’t want to have to explain why Donnie and I somehow managed to shoot his dad in the ass on a goat hunt.

Per my instructions, Donnie and I climbed above the goat and I handed him his rifle. He took no time in firing the kill shot that sent the goat tumbling all the way down to the water’s edge. It was our only real piece of luck for the entire trip. Luckily for the goat he didn’t have to be alive for the final logistical headache as we put him on the boat, broke ice, took the motor off the boat, strapped it on the 4-wheeler, traversed the forest, drove the 4-wheelers onto the landing craft, drove the landing craft back to the Sikumi and then lifted the goat still trapped to the 4-wheeler onto the roof of the trawler.

Author’s note: In 7 days of hunting through freezing temperatures, high winds, rain, sleet and snow 11-year-old Donnie Trump did not utter a single complaint about anything. He even managed to comfortably take a nap during the worst of the above– something his dad and I are still scratching our heads about.

The Blaser R8: An Over-Complicated Piece of SH*T