How to Fish the High Country in Hobo Sandals 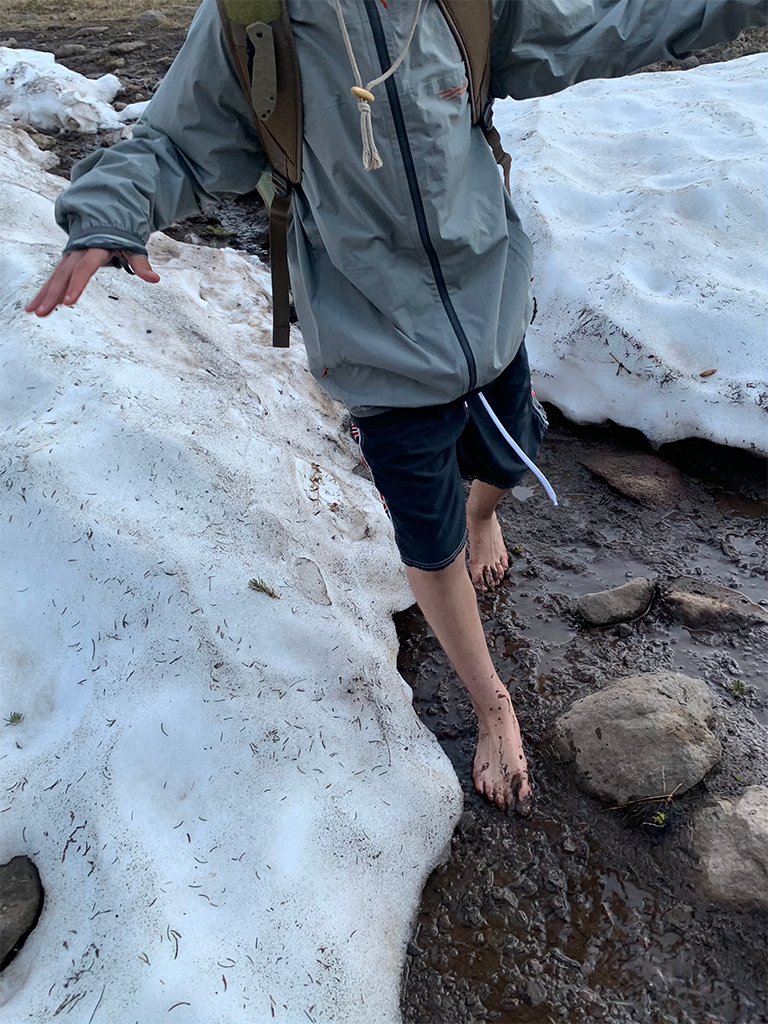 The kid showed up with brand-new boots, kind of a cheap Timberland knockoff. The only reason he bought them was because his mother made him before his trip to Montana. The night before I had stressed to him to wear “comfortable boots” for our hike into the mountains. The kid wanted to wear his Crocs. I realized it was a mistake not to let him long before he started hiking barefoot through mud and crusty drifts of rotting snow.

The plan was to climb about 5 miles up to a high-country lake in Montana’s Gallatin Range–me and my 13-year-old son and his new buddy, the 13-year-old son of a friend of a friend, who was visiting from California. We’d fish for cutthroats and grayling, look for mountain goats, cook some food, and toss around this badass throwing axe I packed in. We didn’t get started until 2 in the afternoon, but June days are long in Western Montana. It’d be 10 or so miles roundtrip, plus a few hours goofing around at the lake, so I had a feeling we’d probably still be hiking out when it got dark. The boys could hack it–I hoped.

About a mile and half in, the kid said something about his boots rubbing his heel. At the two-mile mark, he pulled them off. I told him I had tape that I could put on his hotspots, preventing them from becoming blisters and lessening the pain. He said, nah, he’d hike in his socks, and once we got to the lake I could tape his feet and he’d hike back down in his boots.

I went on record as thinking this was a bad idea, but he wasn’t my kid, so I didn’t feel like I could make him. He had spent some time in the outdoors of Central America and South Africa, and it seemed like he had some hiking experience. Most of all, I’m a big believer in sometimes letting kids learn things the hard way.

The next few miles he hiked great, making good time, not complaining, looking fairly comfortable. The last half mile was a steep climb, and the trail was often muddy, flowing with cold runoff, or worse, covered in deep drifts of crusty, rotten snow. His socks were quickly trashed, and he casually mentioned that his feet were freezing cold, but we hiked on.

Soon we reached the lake in a spectacular alpine cirque surrounded by towering granite walls. It was supposed to be full of grayling and cutthroats, and we saw rising fish immediately. We were stoked as we rigged our fly rods until the kid, rooting around in his pack, said “Hey where did my boots go?”

Fer christsakes. None of us could deal with this buzzkill before we even made a cast, so we quickly convinced ourselves he must’ve forgotten to put them back in his pack at the last water stop, barely half a mile down the trail. We put it out of our mind and spent the next few hours catching grayling and having a blast. I even let him huck the throwing axe barefoot–which I’m not sure was a good idea but it sure was good fun.

When it was time to start the hike out, he was a little less enthusiastic about being completely barefoot. The boots were not where we thought they’d be, nor were they farther on. After two miles, we started to realize that wherever those things went, we weren’t going to see them again. The kid didn’t complain. But this time his pace was slow and getting slower, and I could see him starting to walk gingerly. I had to drop my pack and carry him on my back over some of the longer, deeper sections of snow. It was going to be a really long hike out, and it was already getting dark.

But here’s the thing about kids who spend time outdoors: They’re tougher and more resourceful than most adults give them credit for. Suddenly my son stopped and said, “Hey, why don’t I take the insoles out of my shoes and tape them to his feet.” I don’t know why I didn’t think of that, but it seemed like it was worth a shot. So the boys held the insoles in place as I wrapped black electricians tape around his feet and ankles.

The kid jumped up with a new spring in his step. He said, “I’m looking fairly homeless, but I feel like I can run down this trail now.” And he practically did. We made great time, and all the way to the trailhead the kids laughed and joked and were quite proud of their ghetto Chacos.

We had seen some awesome scenery and caught lots of grayling, something hard to do in the lower 48. There is no doubt in my mind, however, that the favorite part of the trip for both boys–and the thing they’ll remember the most and that will make them better outdoorsmen in the years ahead–was losing those damn boots. Like I said, sometimes it’s best to let kids learn the hard way. Of course, this would be a different story if he’d also lopped off a toe with that nasty throwing axe.