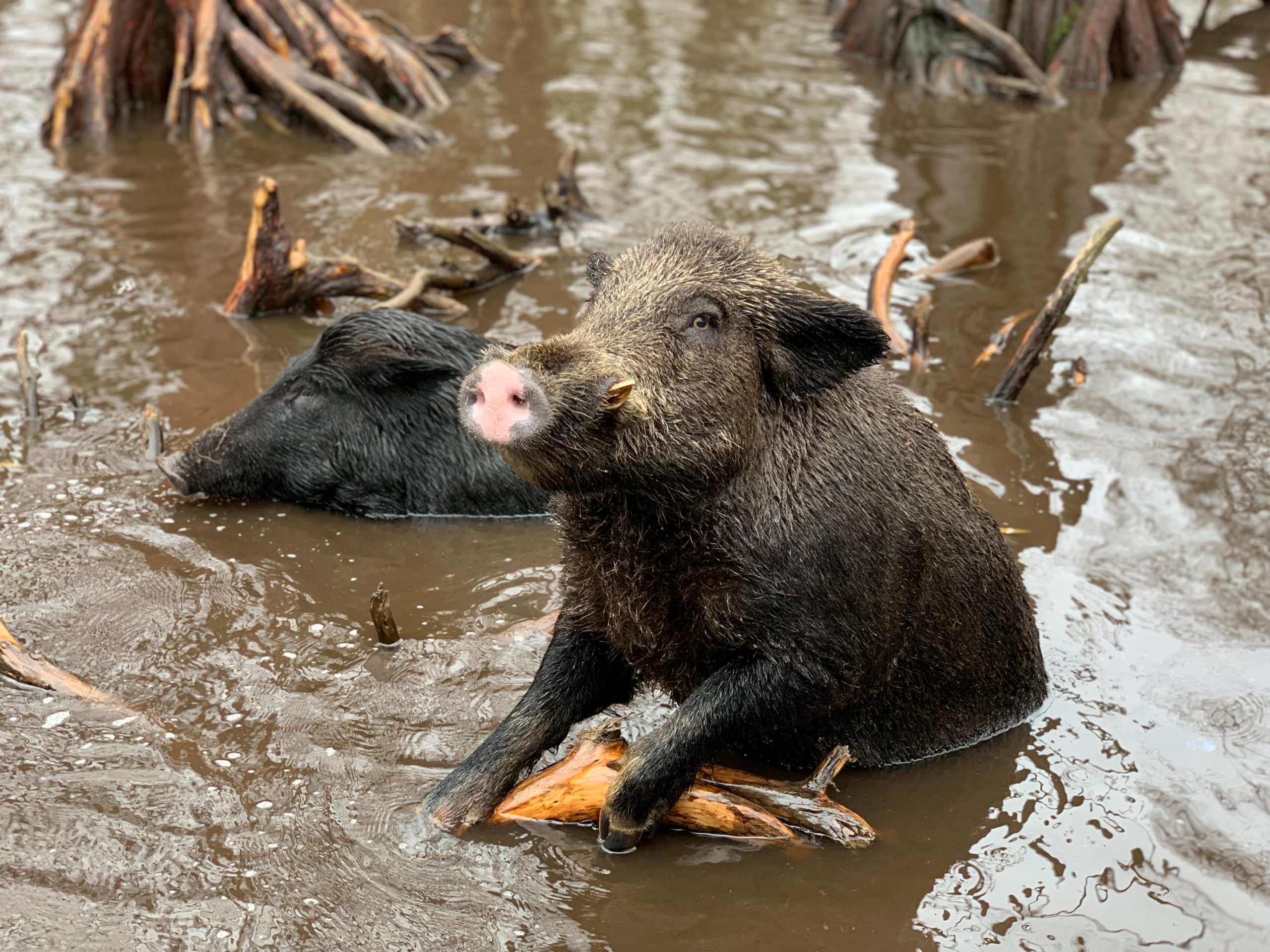 The act of hunting pigs with dogs and knives is as ancient as it is contemporary.  One can easily imagine the chase from horseback or even on foot like our oldest skull-splitting ancestors. But nowadays the pursuit is done on the back of John Deer Gators, also known in Texan parlance as “buggies.”

A Texas-style pig hunt starts at daybreak, or at 9:30am, depending on the perseverance of the group and the tenacity of their collective hangover.  The hunters then rendezvous with a group of guides, handlers, children of guides, and a most motley looking pack of 10 or so fiercely lean looking dogs of all varieties.

A team of hog dogs is made up of different breeds that all serve different roles.  You’ll have chase hounds to run the pig down, catch dogs to grab it, bull dogs to stretch them out, etc.  The breeds don’t always seem to matter, but every dog’s physical attribute determines its job.  The smallest and fastest look like Catahoulas, while the biggest and slowest is a 130 lb. Dogo Argentino named “Rip,” who looks both intensely sweet and also like the meanest motherfucker around.

The dogs are cut loose and carefully monitored with handheld GPSs.  The whole group mounts up on the buggies to fly around the property at a breakneck speed that nearly spills the cold beer in your lap.  The convoy looks like something out of a Mad Max movie, in pursuit of the wild, destructive and invasive Russian boar on the eternal highway–or in this case, a Texas cattle ranch.

Suddenly you’ll screech to a stop alongside an impenetrable wall of briar, thorns and brush so tall it blocks out the sun.  You’ll huddle together with your buddies in the sideways sleet and wonder why you went in February, while the guides study their GPS units waiting for the alert that the dogs have stopped.  Sometimes you wait a half hour, and other times you’ll barely have put feet on the ground before the shouting and whooping can be heard in the distance.

“Who’s up? Get your knife!  Let’s Go!  Run!” The guides shout at you with infectious excitement.

Your blood is up and you’re running head down towards the sound of baying dogs and the brain scrambling screaming of a captured pig.  Every single briar and thorn sticks you, scratches you and pulls your hat off.  Wrong turn, can’t go this way, turn around, shit, collide with the guy running behind you.  Too thick here, find another tunnel in the brush.

Now you’re running through puddles and mud, then hopping across a skinny stream, but you bungle the jump because you’re too amped and land in the water with both feet.  The dogs and pigs and people just ahead are the loudest thing you’ve ever heard in your narrowed world of tunnel vision and briars.

Suddenly, you reach the swarming mass of animals and camouflaged people fighting to control this fiercely combative black hairy pig stretched out with its head in the giant dog’s mouth and a tough as nails rodeo girl dog handler straddling its rear legs.  The sound is deafening to your enhanced senses, that primordial part of your brain is trying to prepare you for what comes next.

The rodeo gal points out the spot near the armpit.  You’ll suddenly remember that the pig’s cutting teeth are the dangerous part, and that’s why the dogs wear kevlar armor.  You will also become aware that you’re standing too close to the pig’s head which has come loose from the dog’s grasp.  Your leather boot is now halfway up it’s mouth, getting chewed to shit while you stand there looking stupid and everyone is waiting on you to stick it with your giant Randall No.1.

So you do, and it’s slightly anti-climactic.  Blood pumps furiously out of the wound and the pig leaves for bacon heaven without much fuss.  The dogs are no longer interested and depart in pursuit of the next prey.