Headwaters on the Soque (soh kweee)

Headwaters on the Soque 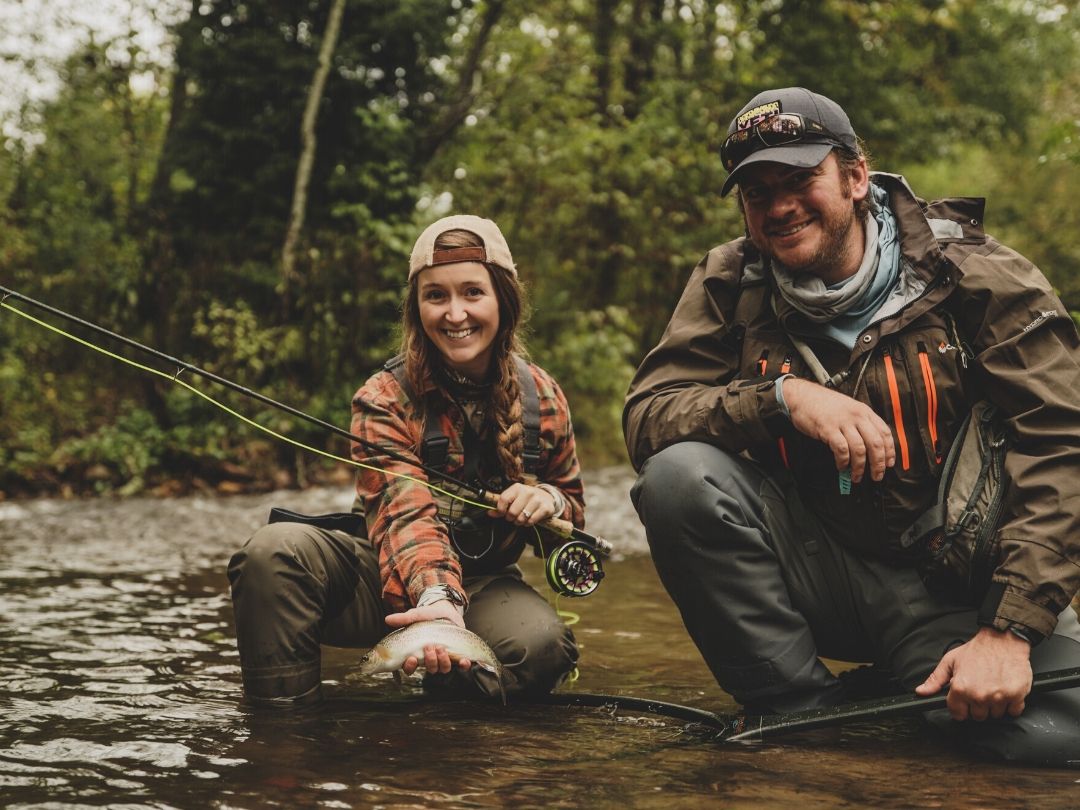 A Quintessential Escape for Beginner & Expert Fly Anglers: Headwaters on the Soque.

Having pursued my career in the outdoor industry, I’ve been granted opportunities and experiences that have exceeded my imagination or expectations. Through my pursuits, I’ve been introduced to people who’ve ignited my passions, and places that continue to inspire me to treasure this journey in the outdoors. Last October, I was afforded another one of those experiences on a guided fly-fishing trip to North Georgia with other female anglers.

North Georgia is quite similar to Southwest Virginia – the low-lying Blue Ridge mountains, farms covering the hollers in between, and the streams that sneak between the two of them – it reminded me of home.

One of these farms, about 650 acres, lays claim to one of the finest trout fisheries east of the Mississippi River. A 3.9-mile stretch of the Soque River runs through the property owned by Mark Lovell. As a fourth-generation owner, he’s transformed this section of the Soque into a prime trout fishery and lodge experience. His grandparents’ homesite on the property has been remodeled into a quaint lodge that accommodated me and all of the girls that I embarked on this trip with.

The ladies arrived Friday evening to an extravagant welcome – hors d’oeuvres and fine Italian wine was organized around the table while supper was being prepared. Lorenzo Bandini is an Italian chef that Lovell hires to prepare meals for guests, and he prioritized our appetites the entire weekend. Bandini specializes in wild game fare, so our meals consisted of such.

Saturday, we headed down to the water. Cloudy skies, cool weather, and light rain made the perfect combination of weather for trout fishing. Our fishing guides were incredible mentors with years of experience on this river.

“These three guides are the best on the entire river system. They have the most wonderful demeanor and incredible patience with people. They’re the best guides I’ve ever worked with,” said Lovell.

Lovell only allows six anglers along the stretch of the river per day, which makes for a phenomenal fishing experience. The ladies split up into three groups of two, led by one guide. I paired-up with Lexi Quinn, CEO of Roaming Hyggie Media, and together we were led by our guide, Chuck. Chuck has over 20 years of experience fishing the Soque of the 35 he’s been alive.

Between the groups, we covered the entire stretch of the river that cuts through Lovell’s property. Torrential rain pried us from the water after nearly four hours of fishing, but when we gathered around the table that afternoon, the stories couldn’t be contained. It was the best fishing experience any of us have had. We were netting fish the entire stretch.

This river holds remarkably large rainbow trout. Most are within the two-to-three-pound class, and we caught some that were easily about six pounds. A three-to-five-pound fish hits like a missile – something you have to see to believe.

“It was different because it wasn’t packed, the fish weren’t pressured, and the catch was endless,” said Quinn.

“It’s hard to find the quantity of fish in one river that is not only accessible and easy to get to, but the size and strength of the fish are really incompatible anywhere else,” said Lovell.

You don’t have to be an expert angler to fish this stream. Rookies, like myself, can go to Headwaters and catch the biggest fish. Lovell said that the largest fish that was ever pulled off of his property weighed about 18-pounds landed by a rookie angler after about a 30-minute fight.

“This place is for beginner’s and expert’s, and you don’t have to fly somewhere like Alaska to experience a fishery like this,” said Lovell.

Between six girls, we landed over 50 fish in a matter of that four hours.

Nearly the entire 3.9-mile stretch of the river is fishable, but Lovell is working on opening up parts that provide a barrier to access. He’s done a lot of stream bank restoration, having fixed several miles and planted a few thousand trees along the bank. Where there used to be sandy bottoms, there’s now rock bottoms and the temperature of the water has dropped ten degrees, creating impressive spawning. A large percentage of the fish at Headwaters are stream-born. Lovell only stocks about every two years to make up for losses due to predators or other fatalities of the fish.

Though, the entire 650-acre property is still not exactly where he wants it. He hopes he can build a larger lodge with more amenities and more activities on the property. Currently, the lodge has four bedrooms, two bathrooms, a kitchen, a living room, and the basement houses a fully stocked bar and game room. Guests can also enjoy sitting by a stone fire pit outside on the patio that overlooks the property after a long day on the water.  Lovell offers guided hog hunts on the property as well.

Headwaters has hosted some of the most prominent names in American history – Jimmy Carter, Jack Hemingway, Nick Hoffman, and NFL players are among a few. U.S. Secretary of Agriculture, Sonny Perdue, still regularly visits Headwaters.

Our stay that weekend was nothing short of a 5-Star experience. Headwaters on the Soque is the most quintessential fishery and lodge in the South for anglers of all levels. Anyone looking to escape into the mountains for a weekend of classic southern hospitality, surrounded by good company and a guaranteed weekend of success for fishing and relaxation, Headwaters on the Soque is the place to find it.

“I love seeing people enjoy the outdoors because of the hard work I’ve put into it,” said Lovell. “It’s old school, simple satisfaction.”