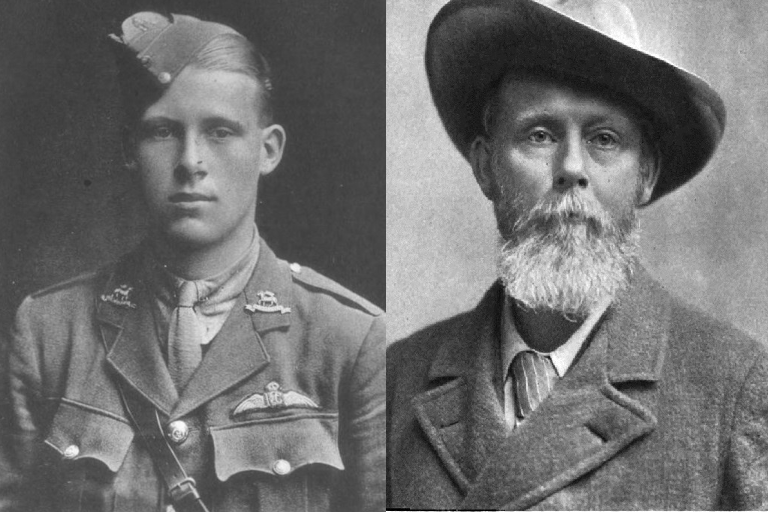 Born to an aristocratic family in Regent’s Park, London on December 31, 1851, Frederick Courteney Selous grew up with a love of nature. He collected butterflies and bird eggs and read the works of explorers and naturalists. He decided at an early age that he would live the life of those he read about and began preparing himself. An example of this came when, at age 10, he was caught by the schoolmaster of his boarding school sleeping on the bare floor in only a nightshirt. Frederick explained, “Well, you see, one day I am going to be a hunter in Africa and I am just hardening myself to sleep on the ground.”

Frederick’s preparation for the uncomfortable probably helped him to survive his first brush with death when, at age 17, he was one of the survivors of the Regent’s Park tragedy, an event that saw 40 skaters die when the ice covering the lake gave way. Frederick escaped the melee by crawling over and through broken ice slabs to safety.

In 1870, Frederick Courteney Selous traveled to Prussia to hunt and collect. It was while during the latter that a game warden tackled him for stealing buzzard eggs from a nest. As Frederick didn’t care to be thrown to the ground and wanted the eggs for his collection, he responded to the warden’s actions by knocking him out. Frederick and his eggs fled the country immediately. He used his sudden change in travel plans to successfully hunt chamois in Salzburg.

Frederick traveled to South Africa in 1872 at the age of 19 to fulfill the dreams he told his schoolmaster about only nine years earlier. He traveled from the Cape of Good Hope to Matabeleland (a region in Southwestern Zimbabwe) where he obtained permission from Lobengula, King of the Ndebele to shoot pretty much anything he wanted.

And shoot pretty much anything he wanted he did.

From 1872 until 1890, Frederick explored, hunted, and shot his way through the mostly unexplored lands north of the Transvaal and south of the Congo Basin. He encountered indigenous who had never seen a white man before, shot elephants and at least one of almost every African species for museums and private collections the world over, and took notes for his many books on the adventure.

In 1890, Frederick worked as a guide for the British South Africa Company and was instrumental to their success in constructing over 400 miles of road through Mashonaland. He returned to England in 1892 where he was awarded the Founder’s Medal of the Royal Geographical Society in recognition of his explorations and surveys of Africa. He hunted Romania in 1899, Scotland in 1894, Sardinia in 1902, Norway in 1907, Asia between 1894 and 1907, the Rocky Mountains in 1897 and 1898, Canada and Alaska between 1900 and 1905, and in Africa with former President Theodore Roosevelt in 1909-1910.

Frederick’s unquenchable thirst for adventure and the notoriety it brought him saw him become the basis for Sir Henry Rider Haggard’s character of Allan Quatermain which in turn was one of the characters upon which Indiana Jones was based on. Frederick was killed on January 4, 1917, by a German sniper while fighting in the African bush war against German colonial Schutztruppen.

Upon hearing of his death, Roosevelt wrote, “He led a singularly adventurous and fascinating life, with just the right alternations between the wilderness and civilization. He helped spread the borders of his people’s land. He added much to the sum of human knowledge and interest. He closed his life exactly as such a life ought to be closed, by dying in battle for his country while rendering her valiant and effective service. Who could wish a better life or a better death, or desire to leave a more honorable heritage to his family and his nation?”

More than 100 years after his death, Frederick’ Courteney Selous’s legacy still abounds in the books he authored, the foundation of conservation he began, and in the Selous Game Reserve in Tanzania which was designed UNESCO World Heritage Site in 1982.