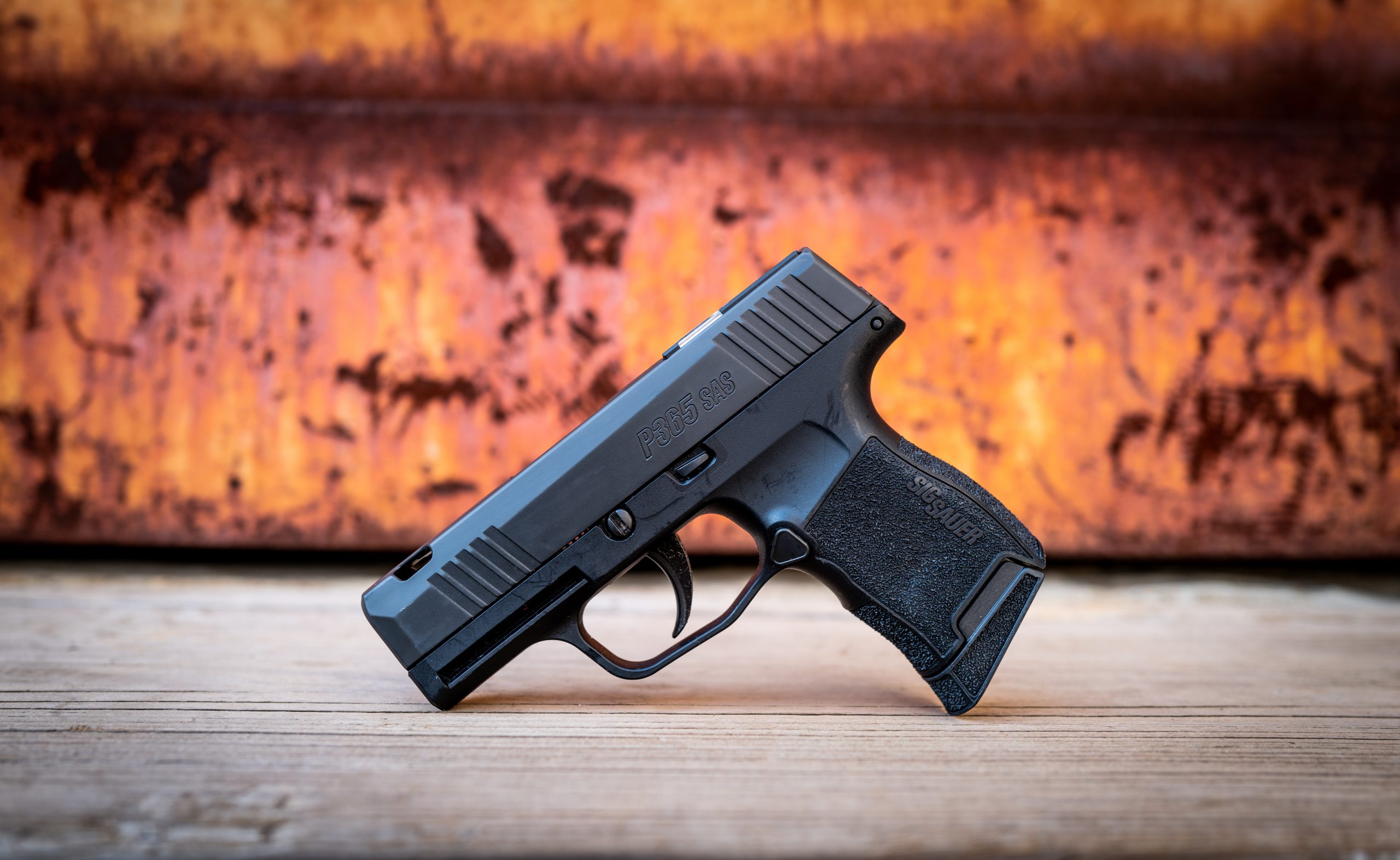 The Sig P365 SAS is not designed for target shooting.

It’s not designed for the military or for law enforcement as a primary duty weapon.

It’s designed to kill a human in a defensive scenario.

The SAS 9mm should be in a James Bond movie. If you ask me, the innovations in this pistol seem to be the brainchild of Q himself…you know, the gear nerd that designs Bond’s cool shit.

In reality, some badass gun development engineer type at Sig probably just raised his hand in a team meeting and made the room quiet with some off-the-wall ideas. Hopefully, the rest of the gearheads hoisted this man up on their shoulders for a lap around the watercooler after said meeting because Sig went from an already popular, tried and true P365 platform and took it to a seriously covert level.

Here’s what they did…

First, they shaved the sights off the top of the slide.

Then they shaved and recessed the controls on the side of the frame.

This means they made the pistol snag-free. There’s nothing to catch on your men’s G-string, pants, jacket, belt, or whatever else you’re into wearing on a Saturday night when it’s time to hit the town.

We don’t judge personal style, but we do judge guns and this one is designed for speed…no matter your personal night-out preferences.

But what about the missing sights?

This is where things get far-out and truly innovative.

Sig embedded a bullseye-type fiber optic sight into the rear of the slide. The fiber optic glows super bright during the day and it incorporates tritium for low or zero light encounters. When you shoot with both eyes open, your dominant eye sees the sight while your non-dominant eye makes it seem like you’re looking straight through the slide with the bullseye projected onto your target.

To be fair, I’ve heard several people gripe about this new sight design, and it does take some getting used to, but I suspect the complaints are mostly due to lack of time on the range with the gun before people carry it.

In my opinion, people spend far too little time with their carry guns on the range before they incorporate them into their daily kit…but I’ll get off my soapbox.

What I can say for sure is that I trained with my SAS…and then I carried it for more than a year.

I like it more now than I did when I first got my hands on it.

The P365 SAS is one of the best-concealed carry options on the market. It was designed with real-world defensive encounters in mind…not so you could shoot at a moving target 50 yards away. It’s built for pure speed…and speed is always a priority when things go sideways. Practice enough with the sight and you’ll be fast and accurate.

This one may take some getting used to, but if you train as much as you should be training anyway, it’s a non-issue.