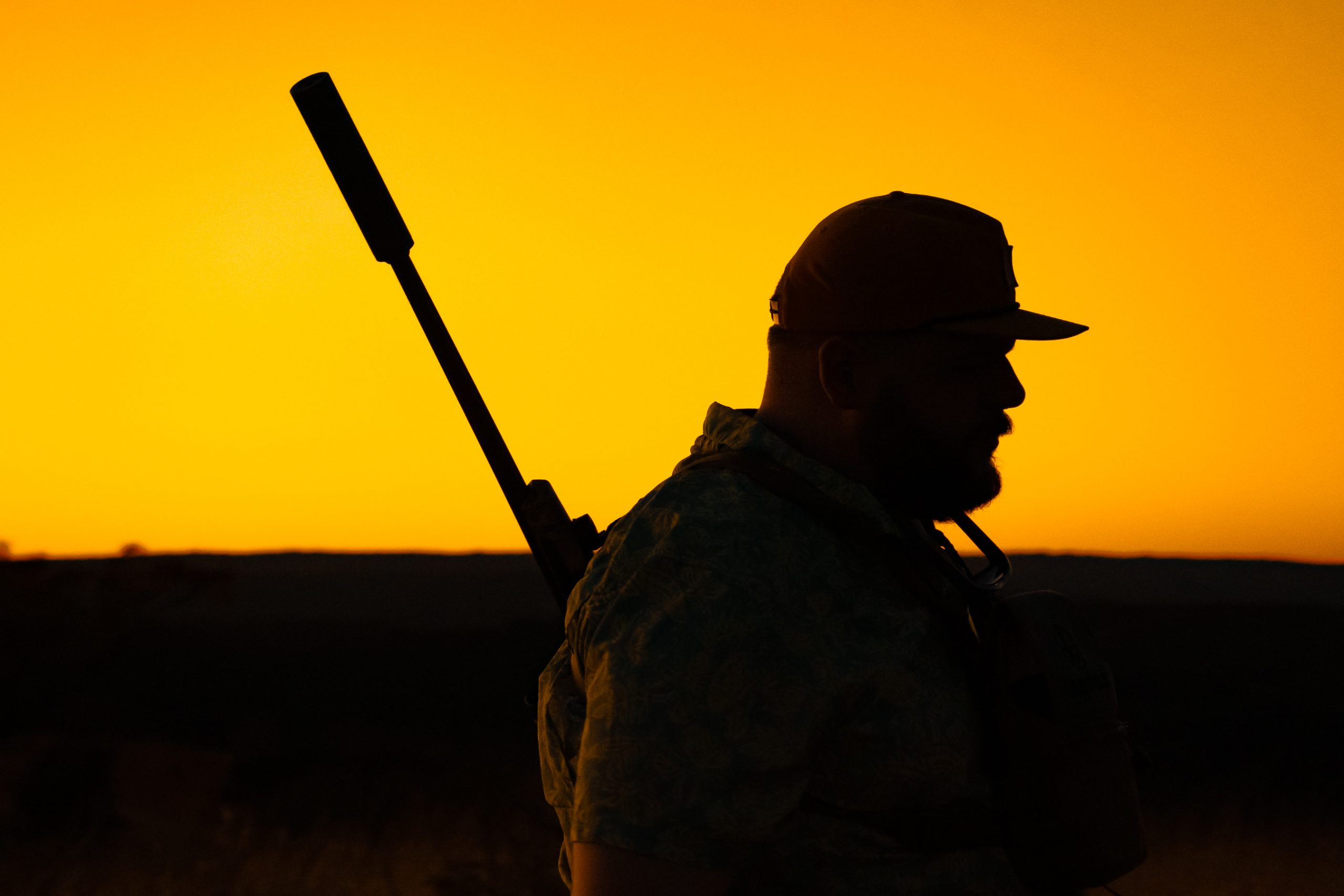 At the sound of the shot all the deer just stood there for a moment, looked around, then resumed eating. One of their own was dead, and I was sold. Here’s how it all went down …

Upon arriving at Texas’ famed FTW ranch I walked up to the bar and introduced myself to the guys when a dude who just goes by the name “Dog” handed me a drink he called a “black buck.” Not wanting to be rude to a dude named Dog, I accepted it. And that’s when I met Brad Anfinson of Silencer Central.

Soon Brad called the group over to a giant Pelican case to check out the myriad suppressors he brought. I learned the South Dakota company’s flagship can is called the Banish 30, and as Brad went over its specs, I imagined throwing it on a bolt-action 300 Blackout, sticking it in a backpack and having the perfect truck gun.

He explained that the Banish is fully serviceable, meaning its baffles can be removed for cleaning. Also fully modular, it can be arranged in a full-length, 9-inch/13-oz. configuration or a more compact 7-inch/10-oz. configuration. The standard Banish 30 is a direct-thread unit with a 5/8×24 thread pitch. Notably, it can be used from .17 caliber rifles all the way up to .300 Magnums. This lends it serious versatility. Its DLC (Diamond-Like Coating) makes it impervious to scratches it will inevitably take while in the field.

But, while the actual Banish 30 can is badass on its own, here’s perhaps the best part: Silencer Central has the ATF’s E-Form process down to 90 days. The company makes it easy to submit everything from your smartphone, from setting up your trust, to taking your photos via its app and sending you a self-administered fingerprinting kit. When your tax stamp arrives, Silencer Central delivers your suppressor straight to your door.

For years I ran a gun store that sold suppressors, so I fully appreciate the pain-in-the-ass this process used to be. Before, you had to get an attorney to create a trust, go get fingerprinted at the police station, get a passport photo, fill out a stack of paperwork that was like signing a mortgage and then wait a year. Silencer Central lets you do all of these steps over email with electronic signatures.

Their process alone makes me want to buy all my suppressors from them. Now back to the actual test …

I’ve always believed that running a piece of gear over a multi-day course under stress and real-world field conditions is a great way to see what works and what doesn’t. The Banish 30 worked flawlessly through FTW’s 300-round SAAM (Sportsman’s All-Weather, All-Terrain Marksmanship) course.

While plenty of shooters think noise reduction is the only advantage of a suppressor, recoil reduction is almost as notable. While the 6.5 Creedmoor I was shooting is not known as a heavy recoiling cartridge to begin with, the addition of the suppressor allowed me to see every impact made, whether a hit or miss. This allowed me not only to correct my aim if it was off, but to instantly learn where I missed so I could learn from my mistakes. No doubt, it’s easier to shoot better with a gun that recoils mildly, and the Banish can help tame that recoil.

After learning the ropes of long-range marksmanship and getting zeroed, I changed into my Field Ethos-style Hawaiian shirt, as one does when deer hunting in Texas. And off we went.

I was paired up with Kalie Botes, a young South African PH who spends his off season guiding at FTW. Hunting with Kalie for whitetail in the West Texas hills reminded us both a lot of hunting for kudu in the mountains of South Africa. Lots of glassing followed by crawling on rocks to get into position for a shot.

Kalie and I were driving along when a group of deer jumped across the ranch road and he slammed on the brakes. A nice management buck was with them. We crept over the rise and ranged him at about 350 yards. Then we stalked to 150.

Through the binos we could make out deer in the shade of some trees. My buck was bedded down; we were only able to see the tips of his horns. I waited on the sticks, and when he finally stood up I shot. Because of the recoil reduction with the Banish 30 I saw my bullet strike his shoulder.

The buck died in seconds.

My stamp should arrive in the next few months.

Cons: Not rated for sustained full-auto use