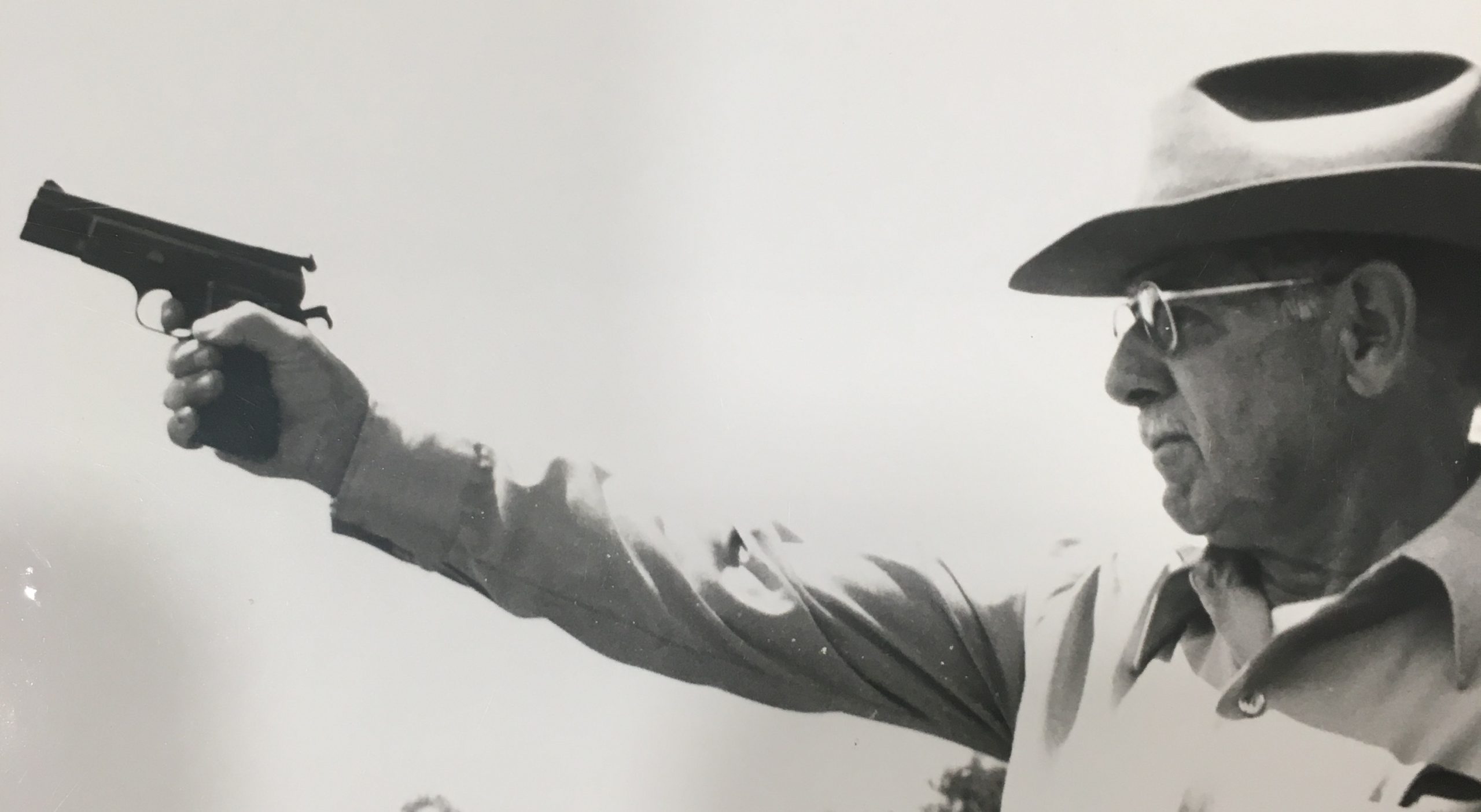 He’s fielded the question so many times, his answer is down pat. Because everyone he meets, eventually, musters up the nerve to ask it:

Col. Charles Askins glares at the questioner, intimidating, angry, looks you straight in the eye and calmly replies:

As he says the words, his stern countenance changes, a huge shit-eating grin appears and his eyes sparkle with glee like a naughty-boy about to light a firecracker. After the angry-look, smiling-face switch, he completes the sentence:

“… not counting [Africans] and Mexicans. ”

You laugh uncomfortably, not quite sure if he’s kidding. He’s not. You’re talking to a self-described psychopath who titled his autobiography Unrepentant Sinner because the former Border Patrolman, national pistol champion and World War II veteran flat enjoys killing men.

Askins was born in 1907, the son of Major Charles Askins Sr., who was an amazingly good shotgun shooter, so much so he began writing about guns and eventually served as a shooting editor for the NRA. Junior was a chip off the old block: Askins Jr. wrote over 1,000 magazine articles and numerous books during his career.

In 1927 Askins joined the Border Patrol where he worked along the Rio Grande in Texas. It was here his pathological enjoyment of killing men began.

“One evening, lying on the levee across from the standpipes of an old, long-unused water filter system, we saw nine hombres take to the stream on the Mex side. It appeared they were going to hit the U.S. bank about 50 yards below us, so we moved down river and awaited them.

“When they topped the levee, we halted them and there was pandemonium! The smugglers dropped their loads and some ran back for the Rio Grande, while others bolted into the settlement on our side, but the leader of the gang held fast.

“I approached this bastard and in my hands I had my old Remington Model 11 autoloader crammed with 00 buckshot. Frank Pachmayr had put an extension on the magazine which ran right out to the muzzle and this gave me a reserve of fire which sometimes proved quite advantageous.

“At any rate, I ran up to the jefe of this nefarious bunch of rascals and I pointed the old auto shotgun at his midriff. I got a mite too close and this scoundrel grabbed the barrel and gave the gun a hell of a jerk. He thought to catch me unawares and expected to get my shooting iron.

“I held the gun in my left hand, pulled the trigger at the same time and the nine big buckshot pellets entered the bandit’s right eye. While the point of entry was pretty smooth, the back of his head was somewhat of a mess. As a matter of fact, there wasn’t much of it left.”

Askins joined the Border Patrol Pistol Team and promptly won the national championship. Askins was a hell of a shot.

When World War II erupted, Major Julian Hatcher from the U.S. Army Ordnance Board called Askins and asked him to join up; he would see to it that Askins was assigned to the Ordnance Dept. and that he would come in as a Second Lieutenant. Askins immediately signed up.

Turning Askins loose in a war—with officer rank—is akin to loosing a skulk of foxes in a mile-long henhouse. It’s going to get bloody.

“The first thing I knew, a Kraut soldier moved out of the alley and commenced to nose around among the packing boxes. It appeared to me that he was probably a deserter and was looking for a place to hide. Stay doggo until the Yanks arrive, then surrender. He got too close to Papalexiou and myself, so I raised up above a big packing case and shot him in the throat.

“I had deliberately shot him just below the chin so he would make no outcry. This joker was packing an old Schmeisser with a wood stock. My driver [Papalexiou] pulled the body behind some packing cases and covered it over. I picked up the Schmeisser and, noting the magazine was stuffed to the hilt, I kept it beside me.”

And so it went, from North Africa all the way through the Bulge, right to Germany. Askins and his unit was halted at the Rhine, and across the river were a company of Nazis.

There was an unofficial cease fire, but Askins would have none of that. He determined the distance to the Nazi encampment with a “borrowed” range finder from an artillery battery (being an officer gave Askins a lot of leverage). He selected a bedroom in a two-story farmhouse and moved a bed to the window where he made a rock-solid benchrest.

During his reconnaissance of the enemy, he had noticed a fat sergeant responded to the call of nature every morning like clockwork, and always went behind the same bush. Askins ranged the bush with his pilfered rangefinder from the window, 800 yards and some change. He called his driver to get a jeep and together they headed out to zero a Garand for that same distance. Askins knew guns, so he knew that black-tip armor piercing .30-’06 was more accurate than standard ball; he got some of it to zero the Garand.

The next morning, right on time, the fat sergeant lowered his trousers, squatted down and …

And it just keeps going! After World War II, Askins is assigned as a military advisor to the South Vietnamese Army and he takes along one of the brand-new .44 Magnum revolvers from Smith & Wesson. You know what’s coming … oh yes, Askins kills the first human being with the new .44 Magnum. He shot a Viet Cong soldier in the back.

Referring to a Colt 1911 tuned for him by Frank Pachmayr, Askins fondly recalled his time in North Africa at the beginning of World War II: “I knocked off four Arabs with the pistol.  … These bastards were given to creeping into camp and trundling off the boys’ barracks pokes. I shot these rascals at close range and just for the hell of it, gave each thief several rounds. It was a revelation to me to see how the old 230-grain issue bullet would penetrate the human carcass. Without a single exception on these bedouins, the bullets passed plumb through. I seriously doubt the brand new 9mm service round will do as well.”

Askins died in 1999, and I’ll give you three guesses what he said to St. Peter when asked, “So … how many men did you kill?”