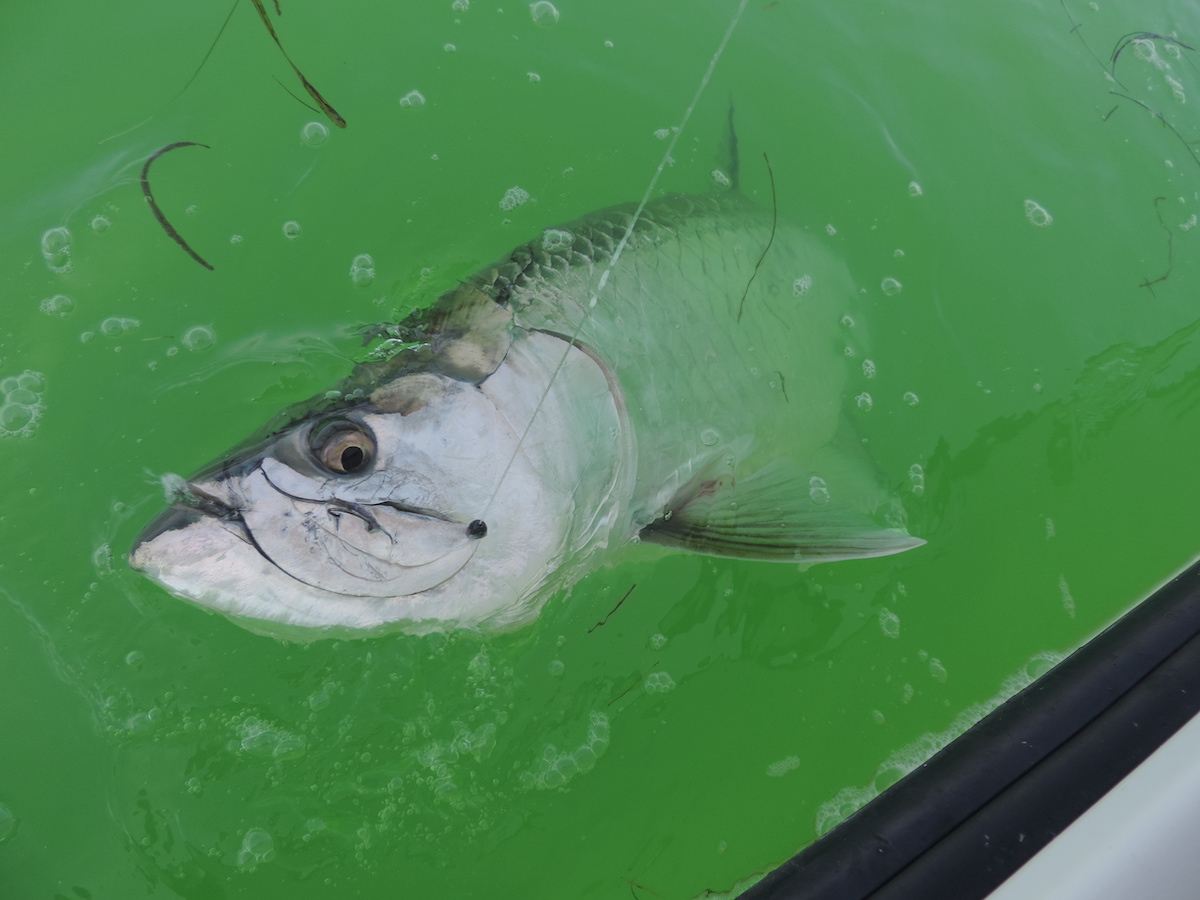 I started reeling in over 100 yards of line, not paying much attention. The tarpon we targeted early that morning passed our baits on the bottom. The school of silver giants slowly porpoised by our boat at no more than 50 yards, illuminated brilliantly in the rising sun.

“Yeah, they swam past those baits, reel ‘em in,” our guide, Capt. Matt confirmed.

Just as he said that, I felt a small bump and stopped reeling. The end of the rod tip quivered. I spun the reel handle once more, the rod doubled over and the line started burning off the reel. My first tarpon.

Within seconds, another 100 yards of line peeled off the reel. Then the silver giant launched itself six feet clear of the water.

“Bow!” Craig and Matt both shouted.

Hunching at the waist, I extended the rod towards the fish to give him line. They’re less likely to throw the hook while jumping. This is known as “bowing to the king.”

The tarpon put on a show, clearing the water a half-dozen times, skyrocketing vertically. After the aerial acrobatics, the fish pointed its nose out to the sea and took another 100 yards of line.

“Get to the bow of the boat,” Captain Matt coached. “We’re gonna take some line back.”

Captain Matt fired up the outboard and we slowly gained on the fish.

I cranked the huge spinning reel as fast as I could. Slowly, slowly, we got to within 75 yards of the fish.

“This is where the work starts,” Craig said, clapping me on the back.

With over 30 years of experience with tarpon, Craig looped a fighting belt around my middle to give my guts a break from the rod butt.

For the next half-hour, I would reel the tarpon to within 10 yards of the boat, only to have a few swishes of the tail take more line. What I did not expect, was how much time the fight would take right next to the boat.

“If the fish isn’t ready, there’s no way to land him,” Matt said. “Try to land one too early and they can break your arm.”

Finally, we got the fish to the boat. Matt hoisted the fish a third of the way out of the water for pictures.

“How big is that fish?” I gasped, completely spent from the fight.

With our first fish in the books, we motored back up the beach to target another school. Tarpon migrate north to south along Bradenton Beach in Florida. Always north to south. The key is to quietly stage the boat in front of a school, cast in front of the fish, and hope they bite as they pass by.

Craig tied into a tarpon next. When the fish cleared the water, I couldn’t believe the size of the thing. It was easily twice the size of my catch. At 70-years-old, I had no idea how Craig was going to fight the monster. However, he answered in fine form.

After the initial long-run, Craig gained line on the fish as we motored up to it. Then, he cranked down on the drag and refused to give an inch. When the tarpon tried to run, the old man would work his way up and down the starboard side of the boat to pull directly against the fish and make it change directions.

“That’s how you do it,” Craig grunted through clenched teeth. “Make ‘em change direction. Keep pressure on ‘em.”

It was humbling. A man twice my age landed a 150-pound fish in the same amount of time it took me to land a “small” tarpon. There is a technique to it.

Craig hooked another tarpon that afternoon. He fought it through the jumps and then handed me the rod.

“I’m old and tired. You’re up,” he said, sitting down to sip some water.

“We” landed the fish. I tried Craig’s technique of tightening the drag. It worked but took an enormous amount of energy.

Over dinner, my back and biceps screamed at me. Why was the saltshaker so damn heavy? We still had two days of fishing ahead of us.

That afternoon Matt decided to take us out into the bay. The water transformed from bright blue to dark green.

Boy did we. A school of tarpon exploded out of the water with three bull sharks methodically following them before we could even get a line wet.

But, the plan worked. Kind of. I tied into a small tarpon that afternoon. Almost immediately, a school of bull sharks was on him. After a couple of sharp tugs, and a bloody boil of fish scales, I started reeling the head of a tarpon in.

That’s when I caught a shark. A big one. The shark inadvertently hooked itself when it ate the tarpon’s head. It slowly swam up to the boat and proceeded to lay on the ocean floor. It wouldn’t budge. I locked the drag and dropped into a squat, reeled in all the slack I could, and stood up, arching my back and the rod to pry the shark off the bottom.

The rod snapped. I went ass-over-teakettle across the stern of the boat. My companions were so concerned for my safety that, once they stopped laughing, they figured we should call it a day.

On our third day, we lost a couple of hook sets in the morning, but that afternoon the fish turned on. Craig and I landed three 100 plus pound tarpon. I noticed we handed the rod off more readily to one another. The pair of bad discs in my lower back screamed at me. My arms dissolved into noodles. Still, we got it done, landing everything we hooked that afternoon.

Over a dinner of fresh-caught grouper in a small beach-side restaurant, Craig and I had a couple of cold ones, solely for medicinal purposes of course.

“You know, this may be my last tarpon trip,” Craig said, looking intently at the enormous tarpon replica over the bar. “I may be getting a little too old for this. Glad you could come fish with me.”

On my drive back home to Georgia, in between muscle cramps and back spasms, I thought about that statement. My initiation was Craig’s last adventure chasing silver giants, a memory neither of us will forget.

Top 10 Books to Bear the Blame

The Dark ‘n Stormy Will Set You Free