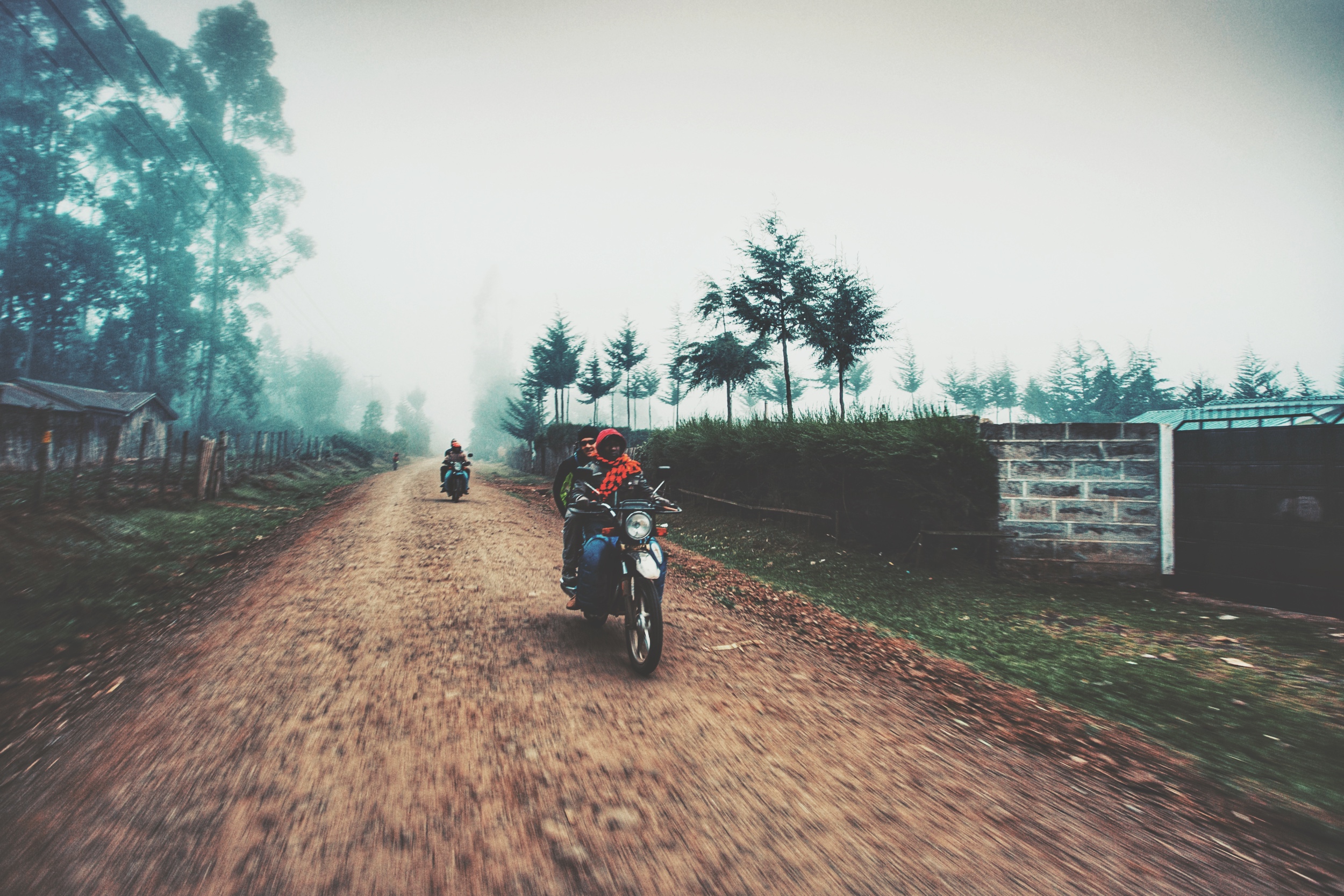 I reached up and tugged the camera strap over my shoulder. The DSLR now rode cross-body, meaning wherever I went, it went. And, well, we were going.

A half-dozen or so young men on motorbikes of various ages stood before me. It was rural Kenya’s version of a motorcycle gang, and today it was our transport through the villages dotting the foothills of the Aberdare Mountains. Not that I knew much about motorcycle gangs … the Montana gang version I experienced growing up consisted of riding shotgun in a diesel farm truck and shooting at road signs without being caught. Anyway, back to the Aberdares.

I was in Africa on a job, documenting water studies and supplies in small villages. Today, instead of visiting more worksites, we were taking a day off to go talk with some rangers about forest elephants and then hike to the site of a recent small-plane crash in the mountains. You know … Africa things.

First, however, we had to get from our quarters to the ranger station. And the best available transportation was by boda boda.

Africa’s answer to taxis, boda bodas are typically driven by young men with a reputation for breaching road codes and assaulting drivers after collisions. According to official figures, in 2022 1,634 boda boda drivers and their passengers died in accidents on Kenya’s roads. Which, put into perspective, really isn’t terrible. There are plenty of other things out there that will kill you.

Camera slung over shoulder and backpack securely strapped, I approached the boda boda driver whose motorbike bore a speaker pounding out thrumming drumbeats into the misty morning. Might as well go all in. I gave him a nod; he eyed the camera and gave me one back. I slid onto the seat behind him, settling boots onto braces and assessing if it’d be possible to shoot images as we rode.

The rest of the group mounted up and we kicked off through winding dirt roads. Powdery road dust mixed with the heavy fog of an Africa mountain morning, and our odd little squadron wound through the countryside. The roar of the bikes seemed to announce our coming—and as we passed one hut three little kids ran out to look at the bikes carrying whites.

Eventually we hit pavement, passing out of the fog and into town. We pulled up at a petrol station to fuel before heading into the mountains. I stretched my legs, shooting images and keeping an eye on a second group of boda boda riders who had been posted up at the station when we arrived. They’d eyed our gang with derision, the tension lacing our group impossible to miss. Rivals are rivals; sometimes you don’t need to speak the same language to understand that much.

It took less than three minutes before shouting broke out. Two of the riders from the other group were yelling and gesturing at our guys who—of course—started yelling and gesturing back. Someone’s shirt came off. I scooted a little closer to my boda boda, ready to move quickly if the nod came.

Which it did, shortly after two rival riders pulled out machetes and slid off their bikes. A couple of the drivers from our gang pulled out knives. (Apparently we only had one machete, and therefore were out-armed.) Drum music still thumping on his speaker, my rider shot me a sharp nod and gunned the engine. That was all the invite I needed. A half-flying jump onto the cracked seat, and we were off.

I spun, trying to frame the shot, ensure the other four mzungu had gotten safely away, and hopefully not fall on my ass. Sure enough the guys were behind me, our five bikes rocketing down the road while the rest of the riders stayed, blocking the second gang with their bikes. Eventually the music drowned out the shouting and I turned forward again.

My boda boda driver peered over his shoulder, white teeth flashing in a grin as we hit more red dirt and climbed into the fog.

I was fucking great.