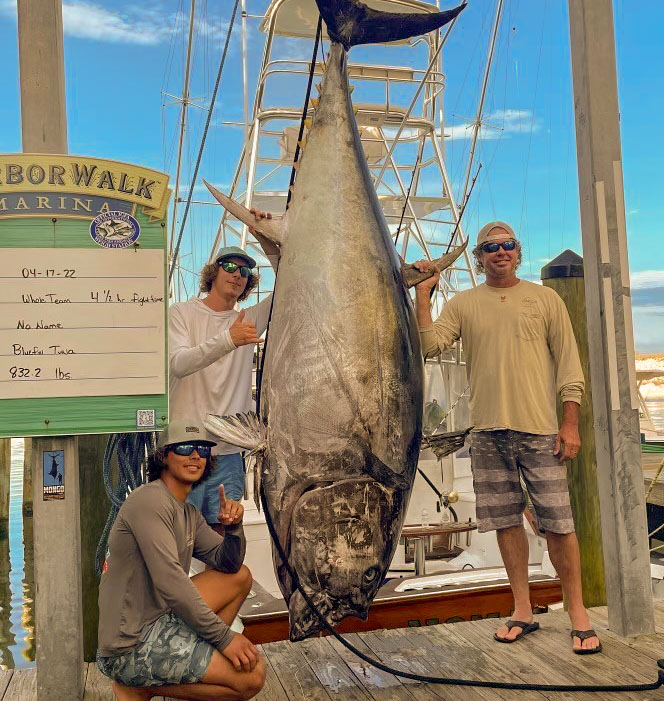 What weighs over 800 pounds and made a whole lot of men very happy last month?

A tuna half the size of a Suburban!

Anglers Devin Sarver, Capt. Jake Matney and Jett Tolbert landed an 832.2-pound bluefin tuna on April 16, 2022. The group was fishing aboard the 50-foot boat No Name some 160 miles off Destin, FL, when they hooked into the leviathan. The 41/2-hour fight resulted in a beast of a fish that measured 113.5 inches long and carried a girth of 86 inches.

Not good with numbers?

Can’t understand just how big the fish was?

Let’s put it this way…

The fish is over nine feet in length.  That’s two feet longer than Shaq is tall.

The fish’s girth is just over seven feet around. That’s longer than a King Size bed!

Insert your next mom joke here.

As monstrous as the No Name’s catch was, however, it is nothing compared to the all-time record holding bluefin. According to the International Game and Fish Association, the biggest bluefin tuna on record weighed 1,496 lbs. That beast was caught off Nova Scotia, Canada in 1979.

The biggest ever landed in my home state of Texas weighed 876 pounds. It was landed after a nine-hour fight off the coast of Port Aransas in 2021.

I caught a 20 pounder off the coast of Papua New Guinea years ago. It’s so small it’s hardly worth comparing in any way to Shaq … or your mom.