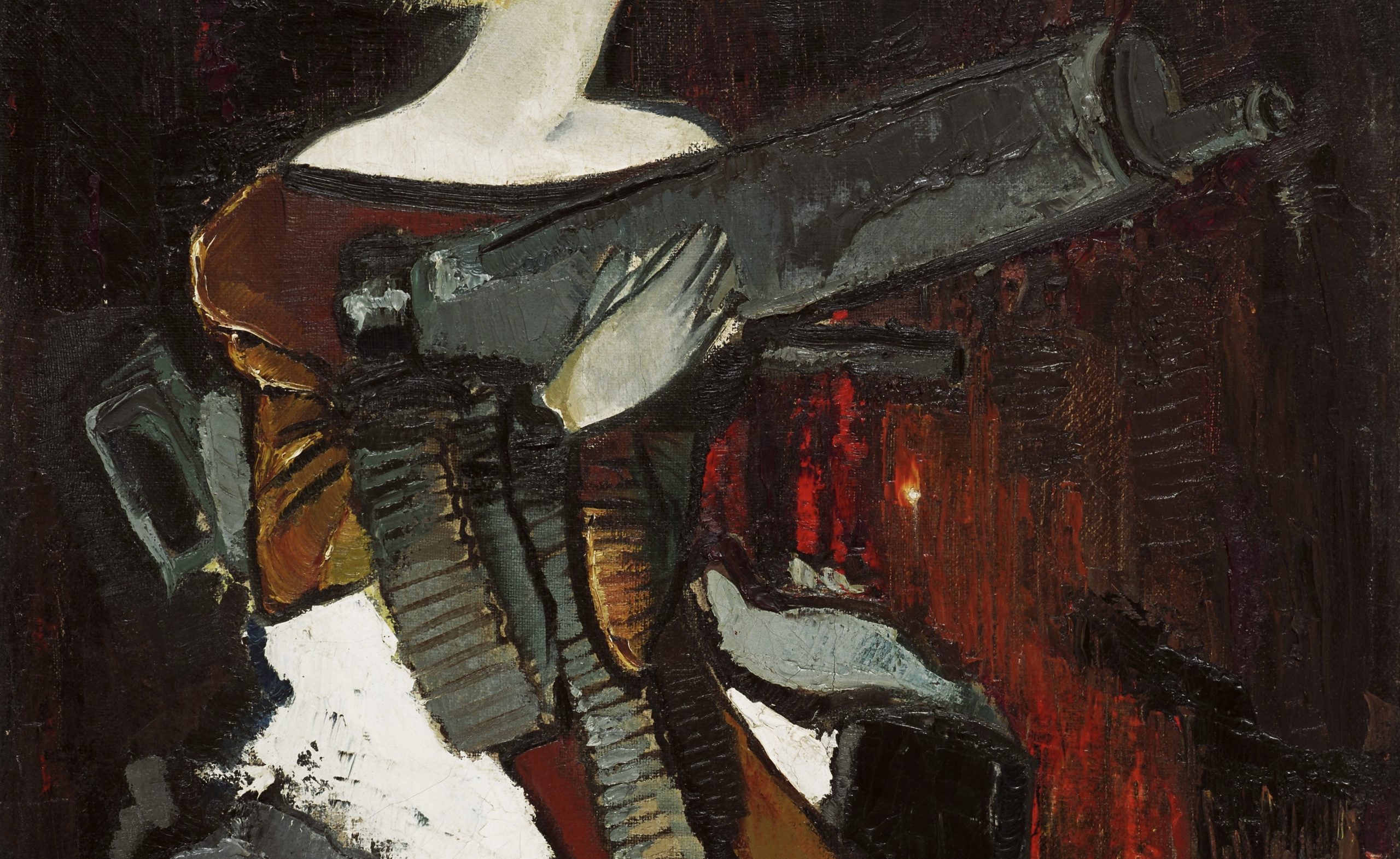 Jee-zuz, I gotta piss like a racehorse! But I’m not stopping, no sir, not with 26 feet of rumbling yellow Penske behind me, full of enough exotic firearms to make a dozen episodes of “Forgotten Weapons.”  Too dangerous. I’m loaded with 32 machineguns wrapped in moving blankets, piled in the heaving pineapple beast, nestled among a warehouse-worth of wooden crates containing surplus ammo. I’m not stopping. No way.

Well, other than for gas and sleep. Initially, I thought I’d crash in the back of the Penske with the machineguns, but then a dreadful thought occurred to me— thieves! They could lock the slide-down door, drive away, me helplessly locked inside. Well, not exactly helpless … they’d have a rude awakening when they eventually opened the door.

No, it’s safer to sleep on the three-across seat in the cab. I’ll eat at truck stops too; delicious cardboard pizza and stale hot dogs. But that’s later. Right now I have to deal with this bursting urge. I reach for a pee bottle in the passenger footwell, awkwardly unzip, poke it in the bottle, and hope for the best. On we roll, me and a League Of Machineguns.

It’s an international crowd. There’s British Brens, Russian belt-feds, Chinese burp-guns, an Israeli Uzi. There’s a representative from Sweden, two from Czechoslovakia, a pair from Turkey, one from Belgium, and even a Hun. A Finnish subgun lies next to a German Schmeisser. They all seem to get along back there, happy and content in blanket-to-blanket harmony. The Austrian belt-fed hums a waltz.

Thirty-two machineguns clank their way across the heartland of America, from Ohio to Nevada, an epic three-day road trip wherein I learn what the future of “self-driving” might entail. My speed is limited by a GPS-enabled governor set for the posted limit, not one mile more. I hit a bit of construction outside St. Louis and the ponderous truck slows itself automatically. The damn GPS knew there was a work zone with a 45 mph limit! Big Brother knows where they repair roads.

How did I get myself into such a mess? My wonderful old friend J.D. Jones— the big bore handgun wildcatter who popularized custom T/C Contenders with his JDJ line of hunting cartridges—was in a jam. He needed help. That’s all I needed to hear.

I would piss in a bottle for J.D., sleep in a truck, drive through a gale in the Texas Panhandle, anything. Besides, a chance to rescue 32 machineguns is the patriotic thing to do—and these guns were in trouble. A ticking clock was counting down until J.D.’s dealer license would expire, and then the guns would have to be destroyed or turned over to the ATF. Not happenin’. Not on my watch.

On top of the time crunch, J.D. had the worst kind of machineguns, those the ATF classifies as “restricted dealer samples” imported after 1986, which meant they could only be sold to a government agency or another dealer. Luckily, I’m just such a dealer so with mere days to execute the transfer, I arrived with the yellow beast.

Machineguns have always been a hoop to jump through. Fill out a form, pay a $200 tax, wait for an FBI background check… the whole process typically takes nine months to a year, but once approved, your dealer can hand over a Tommy gun like any other firearm. Then came the Gun Owners Protection Act of 1986, backed by NRA and signed by President Reagan. While the legislation may have had some positive aspects for gun owners, it dealt a crushing blow to machinegun aficionados by banning the civilian sale of any machinegun manufactured after May 1986.

Bam, just like that, the number of machineguns was capped. Not another could be entered into the ATF registry, at least not as “transferable.”  Any machineguns made after May of ‘86 would be “restricted,” for sale only to government agencies or to another dealer if that dealer is buying the machinegun for the purpose of a sales demonstration to a law enforcement agency. Armed with a police letter requesting such a demo, a dealer could acquire a post-86 machinegun, and—here’s the work-around—he can keep it after the demo.

J.D. was good friends with his local police chief. He had accumulated these restricted machineguns with demo letters signed by the chief; however, he could not sell them to another dealer unless that dealer also had a police letter. I had no such letter.

It turns out there’s one more little trick to play with the regulations, legally: If a dealer surrenders his license—goes out of business—that dealer is allowed to make a one-time transfer of restricted machineguns without a police letter. Saved by the fine print!

J.D. surrendered his license. No choice. Time to wind down, sell the business, move closer to family. The man who invented the .300 Whisper (aka .300 Blackout), founded Handgun Hunters International, and created more wildcats than P.O. Ackley was hanging up his loading bench. I agreed to buy all his “restricted” machineguns because, candidly, he allowed me to make payments. I flew to Pittsburgh one-way, rented the Penske, drove straight back, stopping only for gas and sleep. I was happy to be able to help an old friend, motor across the heartland, acquire a wonderful machinegun collection. The trip really wasn’t so bad … until the pee bottle tipped over.