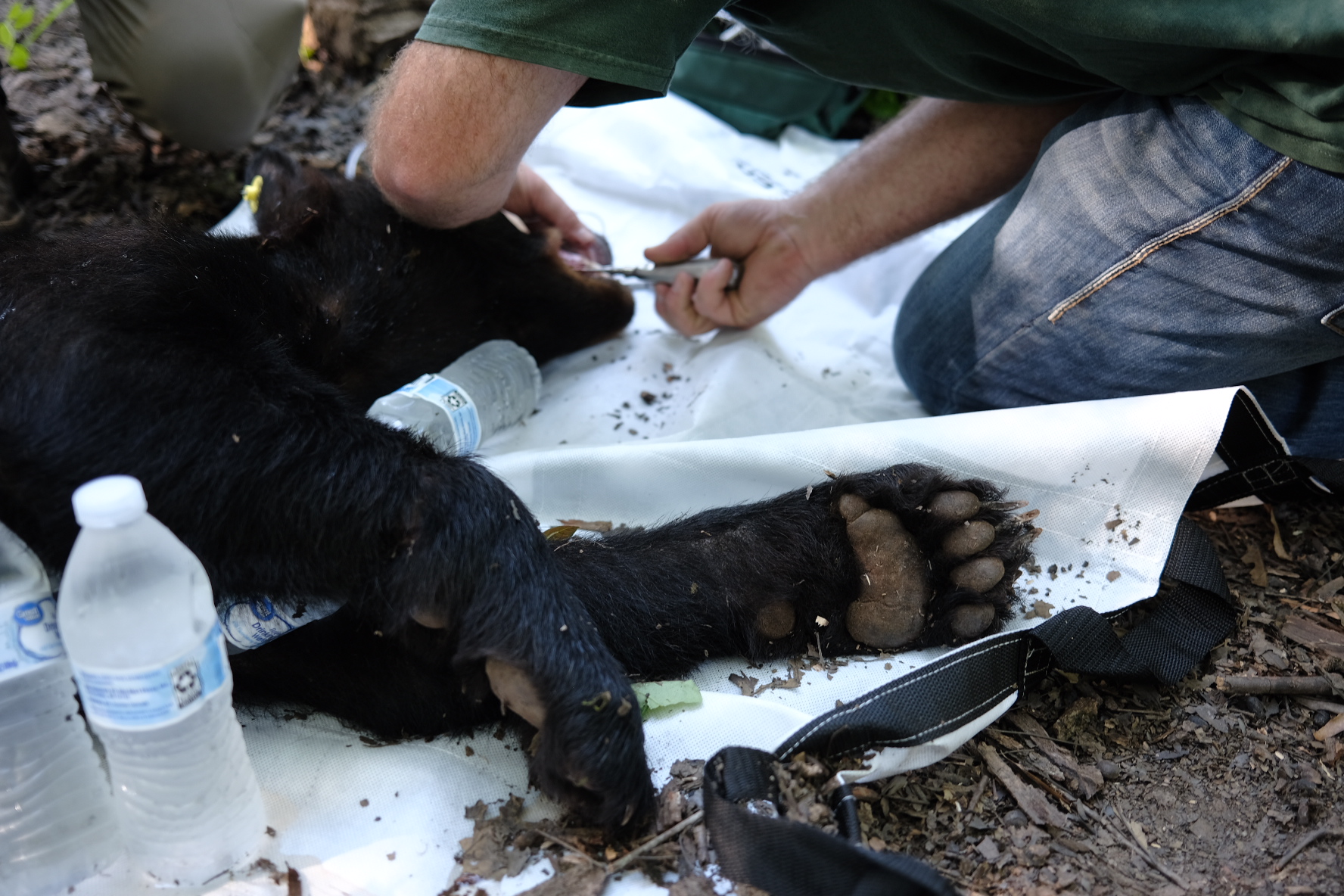 The last time I was this close to a bear, I shot it in the face with a 44 mag.

It was winter then, and I had been hunting solo through snowy mountains.  When I caught up with the bear, the encounter felt natural, ancient, an old game of man versus nature.

I’m no longer in the mountains; it’s balls-hot summer in southern Arkansas. This time I’m standing over a tranquilized bear in a swamp. My mouth has a metallic taste because I’ve poisoned my system with insect repellent.

Instead of a gun, I have a camera, and I’m not alone.  A team of veterinarians and biologists surround the unconscious bear.  They have him hooked up to heart monitors, oxygen tubes, and most critically, there’s a thermometer shoved up his ass.  Unable to pant, the bear is in danger of heat stroke.  The veterinarians make sure that doesn’t happen.

The scene makes me uncomfortable. This bear is being poked, prodded, and tagged in the name of science. I feel silly taking photos of the bear’s current predicament. Yet, I know the biologists’ work is essential for the future of bear hunting in southern Arkansas.

I ask myself how I got here. Why am I studying bears in southern Arkansas? Why is this such a big deal?

Two weeks prior, Charles, founder of Howl for Wildlife, an organization dedicated to protecting hunting rights across the nation, gave me a call. Through a fundraiser organized by Blood Origins, he explained that Howl raised over $35,000 toward bear research in southern Arkansas through a grassroots campaign. Consequently, Howl was invited to join Arkansas Game and Fish Biologists in snaring and collaring bears; there was an extra spot, and he asked me to join the project. I’m always down to chase bears.

Arkansas Game and Fish Commission is planning to open a bear season in southern Arkansas, but they need a solid idea of population numbers to set quotas. While there are plenty of bears in the Ozarks and Ouachitas mountains in the North, the population of bears within the endless timber tracts of the South is a mystery.  Thus, there’s an urgent need to capture and GPS collar female bears.  That way their range can be tracked, and when they den up during winter, they can be located, and their cubs counted.

So, how in the hell do you get a GPS collar on a bear?  Simple answer, you trap it in a snare and then shoot it with a tranq dart. But it’s not as easy to snare a bear in thick forests where you can’t see more than 50 feet. You have to know where to start.

Enter Myron Means, Arkansas’ Game and Fish large carnivore specialist.  With 27 years of experience, Myron knows more about bears than anyone; he’s even built like a bear.

At first, Myron comes across as gruff, but soon I found out he is quick to laugh and ready with a story. This man looks you in the eye when he talks, which is a problem when he’s driving. His habit of turning around to engage in conversation while steering is both endearing and terrifying. Road safety is secondary to good storytelling.

Charles and I followed Myron and his biologists and helped work a line of 20 traps across three counties. The work is monotonous, mainly driving around endless timber plantations punctuated by deer camps and swamps. The dense forest made me crazy with claustrophobia. Southern Arkansas is flat; there are no hilltops offering respite and orientation.

Through years of trial and error, Myron has developed the perfect bear trap, which consists of a snare loop rigged inside a black 5-gallon bucket.  A spring-loaded throw arm instantly cinches the snare tight when a paddle is triggered at the bottom of the bucket.  Secured to the side of a tree at just the right height and tilt, the goal is to encourage the curious bear to put her paw inside to get the bait. If the bucket is too low, she will put her head in and get strangled.  Myron explained he mastered these snares to such an extent that animals are hardly injured and never killed.

After three days of baiting traps with sardines, bacon, and jello packets, I lost hope. We were up against a bountiful blackberry harvest, and bears were not impressed with our offerings. Even Myron admitted trapping bears in southern Arkansas was more challenging than in the Ozarks, and no one had ever tried snaring bears in the summer; perhaps it wasn’t possible.

Then, like it sometimes does in hunting, it finally happened. Myron received an image from one of the game cameras; a bear was trapped. The team’s attitude instantly went from depression to jubilation. What kind of bear? What condition is it in? Suddenly there was a realization that the clock was ticking, and we hurriedly rumbled through the muddy woods to get to this bear.

It’s a male yearling. Seeing it wired to the tree reminded me of a dancing bear act.  It yanks the entire length of wire and flops over; next, it climbs the tree, jerks at the restraint around its wrist with its teeth, and slides to the ground.  The young bear is energetic and unharmed, but the veterinarians are anxious to start.  After judging the weight, Myron prepares a tranquilizer dart with his lead vet while another biologist meticulously records details into a report. The state agency requires complete documentation.  The focus and dedication of the team are impressive; they are a well-oiled machine.

Myron calmly strides toward the bear, which retreats as high as possible up the tree trunk—using a laser sight to aim the air-powered dart gun. Myron delivers the shot directly into the bear’s neck with a thunk.  Within moments the bear feels the effects of the drug, first clumsily sliding down the trunk, then weakly it lays down.  Immediately, the team creates a workspace on a white tarp, the bear is lifted into position, and the two vets arrange their equipment.  Bandages are placed over the bear’s eyes so they don’t dry out before blood, hair, and fecal samples are taken. They even pull a small tooth.  The whole time, I take photos and feel useless.  Unable to help, my thoughts muse about wildlife management and the processes that happen behind the scenes, all the things hunters never think about when they go out to kill their favorite game.

Part of me feels sad; the land no longer feels wild. Indeed this isn’t the rugged, untamed landscape our forefathers encountered.  Is it all controlled like a well-manicured Japanese garden?

No, I shake my thoughts away. I feel better. The land is wild enough; there are still cottonmouths slithering around, bugs biting, and countless dangers; what the Game and Fish Commission is doing is collecting data. If anything, their hard work maximizes the resource for people.

A valuable GPS collar will not be given to this bear since it is male; those will be saved only for cub-bearing females. However, substantial data has been gathered from the animal.  And more importantly, the slump has been busted. By the end of summer, the Commission will have 15 mama bears collared, and in February, there will be den visits.

Reversal drugs are administered, and the young bear groggily wakes up.  As it walks away, I feel happy.  Rarely does a hunter get to see this side of wildlife management.  Even better is the thought that this entire project has been funded by donations from fellow hunters and carried out by biologists who work well beyond their salary hours.

As I take my last glimpse of the bear, I can’t help but imagine we’ll meet again.  Perhaps a decade from now, and when we do, I won’t have a camera.

Editor’s Note: Howl for Wildlife is an action driven conservation non-profit that’s actually worth a shit. Go check them out: https://www.howlforwildlife.org