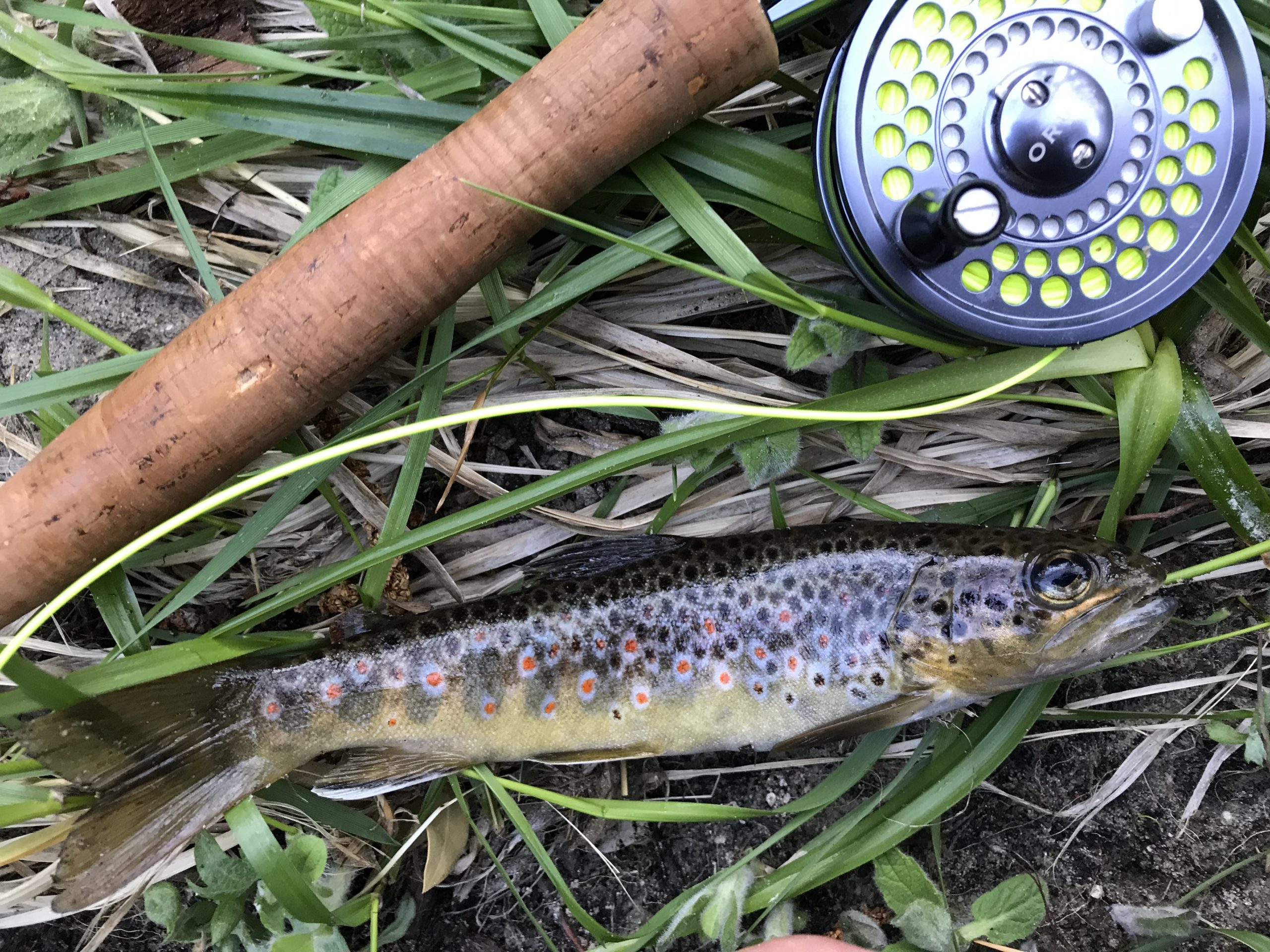 Chasing rumors of ol’ timers and heeding reverent whispers of tackle shop regulars, I set out to find the mythical German brown trout of Southern California. This quest led me to a tiny creek in an impossibly steep-walled drainage deep within the San Bernardino Mountains.  This secret creek is blessed with a year-round flow and can sustain a population of wild Germans planted 100 years ago.  It was a tricky descent hiking down from the highway to the canyon floor.  The afternoon sun burned my skin as I weaved through the manzanita bush and stumbled along the broken trail.  At the bottom of the canyon under the shade of California sycamore, the little creek tumbled through granite boulders and reminded me of a micro-Yosemite.

Luckily, still early Spring, the leaves hadn’t filled in on the willows along the banks, so it was possible to see pools of water through the dense tangle of branches.  Unbeknownst to me, this oasis in the canyon was not the unguarded sanctuary it appeared to be. Ruthless armies of black ants marched in the underbrush, and upon closer inspection, climbed amongst the rocks and branches.  The ants mounted every type of attack thinkable and dropped from the low branches, scurrying under my collar to deliver stinging pinches. Mobbed and claustrophobic in this natural torture chamber, my mind raced.  It was easy to imagine my fate to be like Col. Fawcett in the Amazon, mauled and eaten away; a lonely skeleton picked clean.  But alas, I forced myself to rally; I reminded myself I was here to find trout, not worry with the insects.

As I approached the pools, I could see trout breaking the surface, and swirling beneath. With mist from the falls hovering, it felt as if I was interrupting a fairy kingdom, each sparkling pool a sacred realm.  But as I skulked near these peaceful grottoes the enchanted trout would somehow detect my intrusion and vanish into thin water.

Wedged between rocks and willows trying to stay hidden, I flung flies at the water with my 2 wt., 6-foot Orvis rod.  Using a short leader to avoid snags, I frantically tried every fly in the book.  My nymphs, woolly buggers and mosquito flies were all useless until I took a cue from the ant still latched on my upper lip; while pulling it off I was afforded an idea.  Of course! Ants!

I had one such hook in my kit. I recharged my tippet with a neoprene ant; the fresh start renewed my hope, and I felt the game had only now begun. Focused, I gently stripped line and let the floating hook meander into a pool. My hands were trembling with anticipation as the ant swirled along little eddies; with flicks of the wrist, I begged line to go this way or that around rocks and twigs, praying it would catch a fish’s eye before finding purchase on a snag.  With a mixture of whimpers and cuss words I kept the hook in play.

Suddenly, fast action!  A silver flash snapped the surface, and the ant was yanked underwater!

The little brown was fooled and hooked good!  The battle was of a miniature marlin, with significant jumps and darts; the trout tried to shake the hook, but to no avail.  More prayers were said as I gently coaxed him out of rock crevices and from under logs, constantly reminding myself to keep the tip up and hoping against hope the mandatory barbless would hold. In Japanese angler style, sans net, I held the rod tip high and levered the fish to my hand at water level.  It was beautiful; triumph was mine!

Overwhelmed by joy and relief, I chuckled with manic delight; my impossible quest was over—such a small fish had driven me mad.  Yet even with soggy shoes, biting ants, and the insane hike, the dinky fish was worth it.  It was a beautiful fish, and in such a stunning secret location, the red dots looking magical, such an impossible creature eking a living in a desert canyon.  I took it all in.  More and bigger fish still held to the bottom of the pools, but it was already 6:30, and I’d pushed daylight far enough.  I was satisfied to know there were wild German browns in this spot; I could come back. But for now, one tiny fish was fish enough.