An Arranged Marriage: Hunting with the AR-15 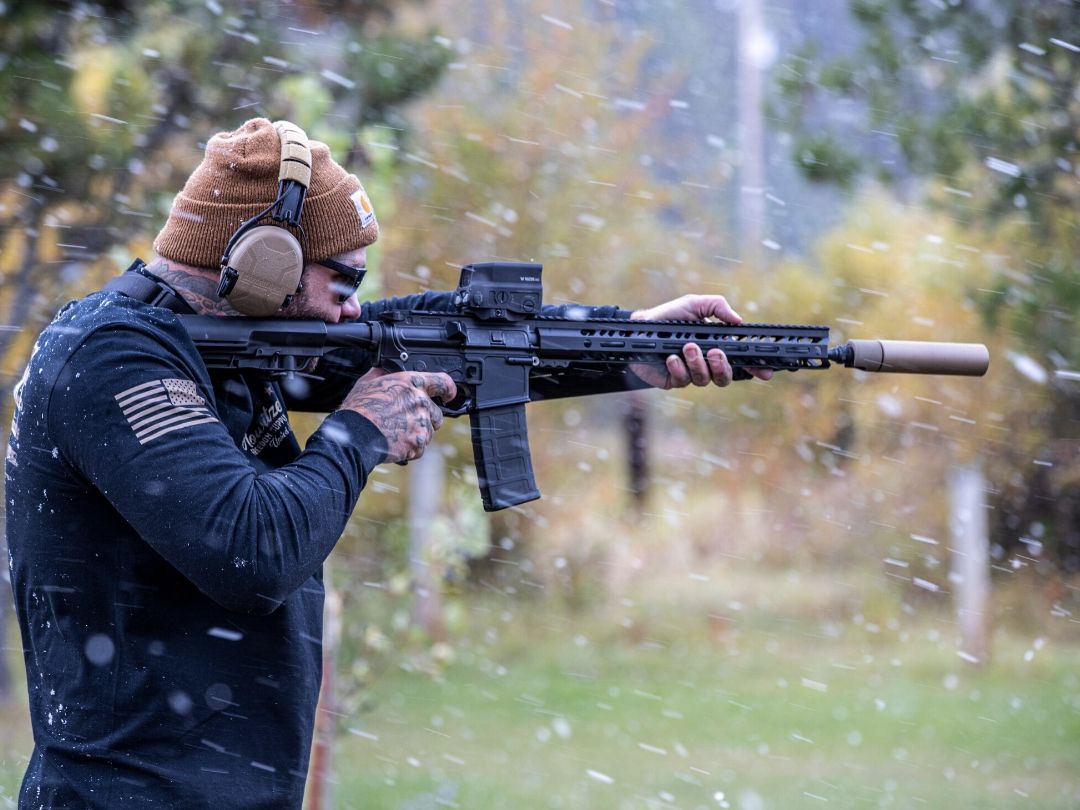 I fired my first rifle at the age of 12 behind my house in the back garden. It was my Father’s Ruger 10/22 that, according to the serial number, was manufactured in the late 1960s. It was the only rifle he owned and the only gun in the house. He loaded the box mag with 10 .22LR rounds that he dumped out of a yellow, water-damaged box marked “Whiz-BANG” that looked like it was about as old as the rifle itself. Every second or third round was a misfire and I was so scared of the rifle that my tiny body jumped at every shot. The jump was even more pronounced when the firing pin landed on a bad round and only clicked.

I was raised in a very small, very rural Utah town with a population of 600 of the hardest working people imaginable. Despite that, I did not come from a family steeped in Second Amendment culture or gun culture. My family was far from being “anti-gun” but my Father served the U.S. Army in the Pacific during World War 2 and had his absolute fill of all items that “banged”, “cracked”, “pewed” or exploded. He did not hunt or shoot which, as a young kid, never made much sense to me knowing his military background as well as his background as a cattle rancher from Montana before the war broke out. I understood the basics of firearms safety as explained to me by my old man which boiled down to “Don’t you dare point any damn gun at anything you ain’t gonna kill”. I didn’t wear eye protection, I didn’t wear ear protection, I didn’t understand disassembly or weapons maintenance. Those things were not even part of my vocabulary.

My second gun was an old bolt action Sears and Roebuck 12g shotgun with no front sight bead that I got from a neighbor in exchange for a summer’s worth of cleaning his stables. I used that shotgun to hunt pheasants with every season until I left for Marine Corps boot camp at 17. To this day I can’t hit anything with a shotgun unless I grind the front sight bead off, so I tend to stay away from all things bird-related.

That was the extent of my firearms knowledge before I was practically engaged to an M16-A2 and later the M16-A4. The marriage was arranged and I was not afforded the opportunity to say no. Fortunately,  the Marine Corps gives you the tools to create a happy, symbiotic relationship with the rifle and you learn to lean on each other to get by. It’s a very strange relationship, nearly impossible to explain to someone who has never experienced it. For me, it wasn’t like the movies. I didn’t name my rifle; I didn’t speak to my rifle, we took no long walks on the beach or any of the other cheesy, overdramatized bullshit you see and hear from the movies.  I had something much stronger and much more unspoken with my rifle… I never questioned it. I knew I was taking care of it and in return, I was confident it would take care of me.

In part of his professional career, Breck works at high-end AR Manufacturer 2A Armament. “Besides the incredible reputation and shockingly lightweight rifles, the biggest thing that drew me to 2A Armament was the company’s focus on using AR platform rifles in hunting applications.” With the wide range of calibers available in the AR platform, it is ripe for use in hunting.

I would like to preface this by clearing up any confusion on my Second Amendment stance. Our Founding Fathers created the Second Amendment to ensure our citizenry is able to combat tyranny in every way shape or form. Eugene Stoner did not design the M16 to hunt animals, the AR platform was designed to fight.

Having said that, there is absolutely no reason why you should not be hunting with a high-quality AR-15 or AR-10. It is infinitely customizable to you as a shooter. We all know that when it comes to large game hunting, the bolt gun reigns supreme. Unfortunately, there are limitations to a bolt action rifle.

It goes without saying that the AR platform is more customizable than your standard bolt action rifle for hunting.  Left-handed? Great! There are a few manufacturers who offer a left-handed bolt gun. However, you may be limited in caliber options for your rifle. Not everyone caters to the wrong… I mean left-handed shooter. This is a shame because despite what everyone says, I think most of you are pretty alright people.  With $100 you can purchase 2 small aftermarket parts like an ambidextrous charging handle and safety selector. Now you are the proud owner of a left-handed AR. When it comes to versatility this platform reigns supreme. Hunters can quickly customize their setup for anything from a night hunt at close ranges to early mornings at distance.  No matter your size, physical restrictions, or hunting needs, you can find or build an AR specifically for you.

For me, hunting with an AR-15 gives me the opportunity to reconnect with a weapons platform that is near and dear to my heart. Hunting with an AR is not going to be for everyone and that’s ok. Bolt action purists will always have their opinion but at the end of the day, if you aren’t hunting with a club, a pointy stick, or a stone-tipped arrow, how pure of a hunter can you really be?